Current members of the sim may create new characters if they are eligible (see the bottom of the page). In that case, they must also pick a role in the Wanted Positions list.

We will be looking for good, descriptive and creative writers that can handle English fluently. You should also know enough about the Star Trek Universe to be able to partake in creating intense, interesting storylines together with the other writers. We are a very literate group, with rules that demand a minimum posting requirement of 200 words per post, and with a deadline of 10 days maximum to reply in all the threads you are involved in. Moreover, the commitment to the story is long-term. We have been running the story actively for years, and we will continue for many years to come. Therefore, we are not interested in casual, brief commitments, but something that will last.

In other words, if you are not a dedicated and prolific writer, who can write long posts and reply to threads within 10 days, you should not apply to join this sim for your own sake as well as the present writers. Also, you should be well versed in proper Forum Writing Etiquette. If you are too inexperienced with forum writing or not literate enough to contribute, your application might be rejected.

Lastly, Star Trek: Theurgy promotes socially progressive views, including all sexualities, identities, male/female/trans artistic nudity, equality of opportunity, civil rights, and multiculturalism. The community is welcoming towards the full spectrum of political or religious views, as long as controversial topics of discussion are allocated to their proper place on the forum and not the Discord server. If you have a problem with this, then you should not register.

Star Trek: Theurgy is a detailed, quite dark, story-driven and long-term roleplay and while it has a 18+ rating, it is not some shoe-horned excuse to write Star Trek smut scenes. If that's what you are looking for, you should look elsewhere since you'll be really disappointed.

It is not expected of any of our writers to detail the intimate relations of their characters with others, even if it's allowed. Several writers among us have an aversion to writing graphic sexual scenes, so if that's not what you care for, then that's no problem at all. The story revolves around a ship and a crew in dire straits, against impossible odds, and with a lot of intrigue and mystery to it. We just don't enforce limits on what you care to write, like explicit scenes of violence or intimacy. This, as long you adhere to our General Rules and all writers consent to the specific scene their characters are in.

When you have read the General Rules and registered, you should check the Star Trek: Theurgy Canon page and read through the Story Archive. More information about the current ongoings in the story will be sent later on in the joining process, but feel free to have a look around, and get acquainted with the place.

When you feel ready, send a PM (personal message) via the forum to the Game Moderator, Auctor Lucan. Follow the joining process below and we take it from there; perhaps you just want to verify if you have the right profile to write with us?

Right now, your character could enter the story in a few different ways, and they are all listed on this page: Onboarding Page.

On that page, you can get a lot of great information besides the options for how your character enters the story. Make sure you take your time to read through it thoroughly at your earliest convenience, since it will have direct bearing for your character when s/he comes aboard the ship.

Given the size of our community, we have a number of friendly writers that are not only experienced with the story and the functions of the forum, but they are also available to write an inaugural thread with your new or newly inherited character. This all depends on how many threads the Mentors are already writing, of course, but once you have become a full member it is encouraged that you reach out to these writers on Discord or via PM on the forum so that you can learn the ropes. If the Mentor you contact is temporarily available, they will help you find someone else to write with instead. The GM is also available to help with any questions you might have, and in that case, it is encouraged that you write him a PM on the forum instead of using Discord.

If you need help with a first, aka inaugural thread, it is advised that you pay careful attention to what characters the Mentors are writing (see below). If you have an idea for how to start up with your inherited character, and one of the Mentor's characters would be perfect in the scene, then make sure you flesh out the idea for the scene you have in mind when you contact the Mentor. You should also factor this into account before you approach a Mentor: Does the Mentor's character have a reason to interact with your character? Are they in the same Department aboard the Theurgy? In either case, does this have relevance for the scene you have in mind? When an inaugural thread is started, the Mentor should PM the GM with the link.

Here are our current Mentors!

All Mentors earn 5 Tokens for writing inaugural threads with new Theurgists, but it's not mandatory that your first thread in the story is with one of the Mentors. Perhaps you already know one of the writers here, or you get to know someone on Discord that you can write with. Either way, the Mentor Program is there to help those who need help starting up. 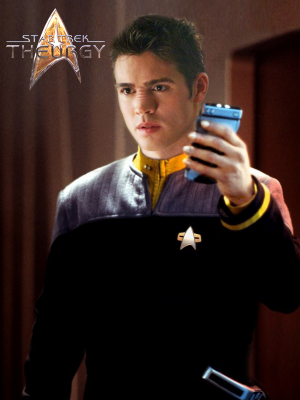 The maximum allowed player characters in Star Trek: Theurgy is 4 (four) characters for all members except the GM, who has to tell the story on many fronts, spread across the whole ship and all its departments. Total number is not counting NPCs, which are available for all writers. There is also a Token Reward on the Story Prompts page to strive for, if you're ambitious. Besides this Token Reward, the only exception to the maximum limit of 4 characters is if the Game Moderator grants specific permission to write a story-specific, temporary NPC in an Episode.

If your Capacity rating has been high enough over the course of the last year of active writing, you reply within 10 days in all your threads, and it is 3 months since you last added a character to the story or joined the sim, you are eligible to add another character. The Game Moderator can quickly tell if your Capacity rating is high enough since he has a spreadsheet that can easily crunch the numbers for you.