The following is a listing of all of the named NPC’s in Starfleet Intelligence and the Diplomatic Corps serving aboard the ship during the Theurgy’s struggles against a compromised Starfleet. 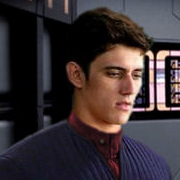 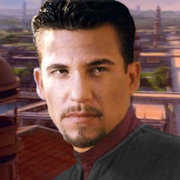 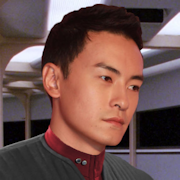 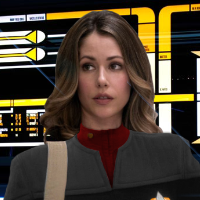 Niccole, or rather Nikki as she prefers, was a Junior Data Analyst assigned to Theurgy, who came aboard while she ship was docked in orbit of Aldea Prime. One of two Analysts that had been sent by Admiral Anderson to assist in setting up an effective Intelligence unit on that ship, she has settled into the role of Junior Analyst under the stead of Senior Analyst, Dantius Thi Anh-Le. Born in Santa Monica on Earth in 2356, she graduated from Starfleet Academy in 2377. She was born with a fraternal twin, named Cole, who attended Starfleet Academy the same time she had, though Cole was tragically killed in 2375 when the Academy was attacked by the Breen during the Dominion War. Initially an Ops Officer, she was recruited into Starfleet Intelligence in 2378 by Admiral Anderson and completed her SFI training later that year before being assigned to Starbase 211. In 2381, she was reassigned to Theurgy, and traveled there aboard a Klingon Warship alongside a number of other new personnel. 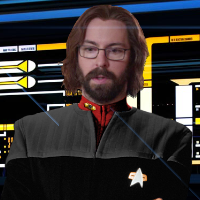 Guy Benton was an Encryption/Decryption Specialist assigned to Theurgy in 2381, who had traveled to Aldea Prime aboard a Klingon warship alongside many other Starfleet Personnel. He was born in Toronto on Earth in 2350, and though he did not attend Starfleet Academy, he did attend Warrant Officer training in Sacramento, where he specialized in advanced computer coding. A particularly gifted mind, Benton had rarely spent an extended period of time at any of his numerous assignments. Arguably the most talented data specialist aboard Theurgy, outside of Selena Ravenholm, Guy was know for having a particularly acerbic personality, especially toward his longtime comrade, Dez Chundab, of whom he shares an almost begrudging friendship. 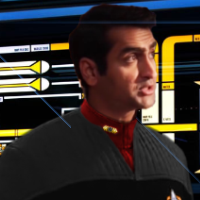 Dez Chundab was an Encryption/Decryption Specialist assigned to Theurgy in 2381, who had traveled to Aldea Prime aboard a Klingon warship alongside many other Starfleet Personnel. Dez was born and raised in Chicago on Earth in 2350, the only son of Pakistani parents, of which his mother had also been a member of Starfleet. A talented, if not sometimes clumsy coder, he completed his Warrant Officer training in 2372, after which he seemed to attach himself to his fellow computer coder, Guy Benton, travelling from one assignment to the next alongside his begrudging friend. While not as technically proficient as Benton, Dez had proven himself more than capable of acting as an encryption/decryption specialist, often aided by his freeform ingenuity. 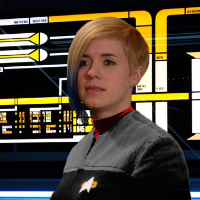 Sarah Benson, with two ‘S’ in her name, was a Encryption/Decryption Specialist assigned to Theurgy in 2381. She came to Aldea Prime aboard a Klingon warship, having shared accommodations with Lt. JG Kate Foster along the way. Born in 2355 on Centauri B in the Alpha Centauri system, she later enlisted with Starfleet as a Systems Engineer, though would eventually opt for further specialized training at the Warrant Officer Training Center in Sacramento. After leaving, Benson was assigned to Starbase 375, where she served under Admiral William Ross during the final months of the Dominion War. Afterward, she was cycled from one posting to the other, until she somehow would up playing third wheel to the odd couple that was Dez Chundab and Guy Benton. While Sarah recognized the talent of her fellows, she did not enjoin their penchant for bickering, instead having opted to mind her business, and her coding while they fought incessantly. All the same, she still found herself assigned to Theurgy alongside them, a place she seemed painfully destined to remain in. 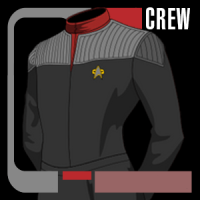 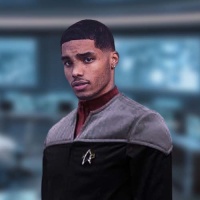 Abel J’olan was a male Bajoran of the rank Petty Officer 2nd Class, serving as the 1st Chief Diplomat’s Aide aboard the Starfleet vessel USS Theurgy. He was 26 years old in 2381.

Having lived his childhood through the end of the Cardassian occupation and the Dominion War, Abel always felt a strong sense of duty and responsibility. That paired with a desire to do his part within the very institution, that had fought for his homeworld’s liberty, he joined the academy in the command program.

Struggling with the demanding curriculum, but excelling in interpersonal communication and analytical understanding, he was swiftly directed into the enlisted bootcamp for a diplomatic career. After serving on the USS Diamondback for one year, he was transferred to Theurgy’s pool of command aids, before being transferred to the diplomatic corps after the Jupiter incident.

He is one of the survivors of the original crew. 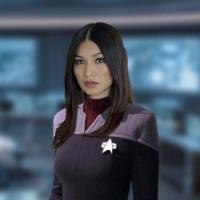 Fen Chao was a female Human of the rank Petty Officer 3rd Class, serving as the 2nd Chief Diplomat’s Aide aboard the Starfleet vessel USS Theurgy. She was 24 years old in 2381.

Born on Earth Fen grew up in the Chinese province to very traditional and often conservative values. Which lead her to develop a strong sense of morale, at a young age, and the value of people’s customs. Striving to understand many different cultures, based on their beliefs, granted her a special invitation to the diplomatic department of the Starfleet enlisted corps.

Brushing through the curriculum with ease, Fen found herself presented with the option to add another two years at the academy, for an officer’s rank, or dive right in with an assignment on the USS Poseidon. She chose the latter. A jumping board which eventually landed her on Theurgy in the onset of its diplomatic mission to Romulus as aid to the ship's XO, before being transferred to the diplomatic corps after the Jupiter incident.

She is one of the survivors of the original crew. 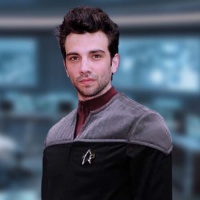 Kass Lourdes was a male El-Aurian/Human of the rank Crewman 1st Class, serving as the 1st Assistant Chief Diplomat’s Aid aboard the Starfleet vessel USS Theurgy. He was 24 years old in 2381.

Born shortly before, but not remembering the decimation of his father’s ancestors by the Borg, Kass has grown up on the run, never really knowing a ‘home’. That’s how he came to be a blank canvas upon which education could draw an exceptionally objective character.

Joining the enlisted corps of Starfleet, the young man quickly discovered his skill well served the diplomatic route and thus, after graduation, joined the liaison office to the Federation’s foreign ministry. Subsequently serving in several embassies around the galaxy, he ultimately was allowed to join the Theurgy crew on Qo’nos.

He is currently under special observation by intelligence and his access is restricted. 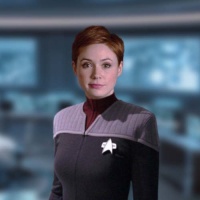 Jordan Wilde was a non-binary Human of the rank Crewman 33rd Class, serving as the 2nd Assistant Chief Diplomat’s Aid aboard the Starfleet vessel USS Theurgy. They were 21 years old in 2381.

Growing up in a religious family of the American South, Jordan did not have the easiest childhood. Struggling with their own identity for quite some time, in such a restrictive environment, has taught them from an early age to convey themself in a matter contributive to a diplomatic resolution.

Entering the Starfleet enlisted corps with the intent to apply their skills and personal interests in counseling, the young cadet eventually graduated in teal, joining the crew of the USS Resolve. Eventually being evacuated to Theurgy, they served as a counseling aid before being picked personally to join the diplomatic detachment by Chief Diplomat Samantha Rutherford.

They are one of the few survivors of the USS Resolve.

When you use an NPC in your thread/objective/joint-post, you must:

When you create a brand new NPC for your thread that may be used again later, you must: 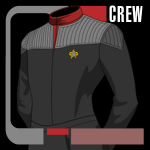