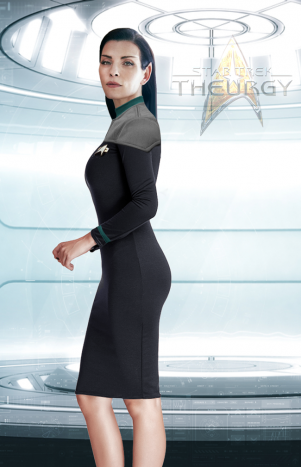 In 2314 she was reassigned to the USS Theseus. Although the size of the crew on board did not require a ship’s counselor, the nature of its long-term deep space research gave Starfleet cause to assign one, not only to provide for the crew’s mental health needs, but also to study the effects long term deep space assignments on a smaller crew. She served aboard until 2321 when an accidental explosion on board ship caused the death of four crewmen, injured a dozen others including Hathev, and left the USS Theseus so badly damaged it had to be towed to Starbase 313 where it was eventually scrapped.

After her recovery at Starbase 313, Hathev was offered a promotion along with command of the station's Counseling department., and after a promotion in 2321 she was given command of her own department on Starbase 313. Although she stayed in this posting for a decade and a half, her career stagnated, causing her no small amount of frustration as she found Starbase life far more predictable than her time aboard starships. Despite this, Hathev remained at this assignment, having begun a relationship with a civilian who lived aboard the satiation, running a bakery. Ultimately she remained at Starbase 313 until 2336 when internal restructuring made it possible for her to leave.

Following her assignement to Starbase 313, Hathev trasnfered to the USS Damascus. Here, she found her work rewarding. At the time, the USS Damascus was a ship of the line and as a result was often a first responder vessel in many diplomatic, tactical, and scientific operations. It was an opportunity that satisfied her until 2356.

Hathev had been reluctant to give up her position on the USS Damascus, but she found she enjoyed the opportunity to return to her more studious roots as a teacher and researcher. She was even able to finally complete her dissertation for the Shirkar Academy, and her subsequent research papers earned her the Vulcan Scientific Legion of Honor in 2366.

In 2377, after dropping out of university and trying a number of jobs unsuccessfully, Kireil enlisted as a non-commissioned officer in Starfleet. Any relief Hathev might have felt was quickly destroyed, however, as during his very first assignment Kireil was radicalised and left Starfleet for the [Maquis].

After Kireil betrayed the Federation, Hathev's life fell apart. Angry and in pain, she could not contemplate forgiving Kireil for his actions and considered him no longer her son. This was the subject of many, many arguments between her and Triss, who held out hope that Kireil could still come back to them one day. Eventually, Hathev found it impossible to be at peace in their house in Torgny and she took a research position on Starbase 84. She served aboard station for barely a week when she answered the request from the captain of the USS Bellerophon for all available counseling personnel to be transferred to their vessel. A week after that transfer, the USS Bellerophon intercepted, engaged, and was destroyed by the USS Theurgy. Hathev was one of the handful of survivors rescued by the Theurgy´s Ranger configuration.

Hathev's introduction to the USS Theurgy was littered with doubt and mistrust. Like most of the rest of the Federation, Hathev believed the lies that had been spread about the ship's hijacking, and subsequent defection and with that information she was prepared to oppose any detante made by the crew. However after meeting with Captain Ives and mind meleding with Cir'Cie, she became convinced of the truth the Theurgy carried, and agreed to willingly join their cause, knowing it would brand her a rebel.

During her assignment on Starbase 313, Hathev pursued a romantic relationship with Triss Liebrecht, a human woman who ran a bakery on the base. Although, Hathev remained on the base, in 2334 Triss returned to her home in Torgny, Belgium, Earth, after the death of her mother. The two maintained a successful long distance relationship and leave in 2339 Hathev and Triss were married on Earth.

Hathev always made it a point to return to Earth as often as possible to be with her Wife, especially when she had to endure the pon farr. However, in 2347, circumstances prevented her from leaving the Damascus and she was left with little option but to purge the Pon Farr by mating with another Vulcan aboard ship.

When the Damascus returned to Starbase for re-supply, she found Triss waiting for her. After reconnecting, and obtaining the consent of her son's biological father, Hathev arranged for Triss to move on board ship so the couple could to raise him together and in the proximity of his Father. However, as the boy grew and his father transferred off the ship, the couple found it difficult to provide for the child's needs. In 2356 she applied for tenure at Starfleet Academy and the family moved to Triss's family home in Torgny.

When Kireil defected to the Maquis, Hathev found it difficult to cope, though she tried to do so for a number of years. Tensions rose between her and Triss as their marriage became more and more strained. Eventually, Hathev came to conclude that the only way for her to find peace would be to seek out a new perspective and return to active duty on Starbase 84, a decision vehemently opposed by Triss who refused to go with her. Despite this, she took the assignment.

Hathev was naturally studious and academic, with a sharp, inquisitive mind and a laser focus for the things that interested her. As with most Vulcans, she was painstakingly logical and collected, and sought to be in control of herself and her surroundings whenever possible. Even so, Hathev often found it difficult to suppress her emotions and despite her best efforts, her emotions were known to bubble to the surface. It is this which she attributed to what prompted her to pursue her relationship with Triss in the first place. Despite this, she was ambitious and could be somewhat manipulative, but she also lived by strict rules and a stalwart sense of duty and ethical conduct. She had little patience for time-wasters or those without clear purpose, and she could be harsh in her judgement of such people.

In her personal life, Hathev enjoyed the study of languages, having a mastery of at least seven languages, and a working knowledge of a dozen more. She was an advid reader, raised cacti and bonsai trees, and a proficient swimmer. Especially as she grew older, her tolerance for cool temperatures lessened and she could become irritable if the weather was too cold, and she would combat this by keeping herself warm as much as she could. She also had a sweet tooth, and could often be found reading in her quarters, enjoying a latte and wrapped in a blanket.

Hathev had a swimmers body: lean, with some definition in the shoulder and upper arms. She was shorter, but moved with a fluidity that spoke to a sense of regalness and grace. Her strength was somewhat weaker than many Vulcans but she was still safely above the human average. She carried herself with confidence and poise, and had a sharp, discerning gaze. Her hair was long and black, and she usually wore it either loose below her shoulders or swept back elegantly.

Her attire was usually functional and stylish, and she presented herself impeccably at all times with a neat and tidy appearance. When not wearing her uniform, her taste in wardrobe tended to comfortably fitted garments that complimented her natural shape and were either just one or two colors as she considered anything more flamboyant to be excessive. The only people who had seen her any differently were very close to her indeed.