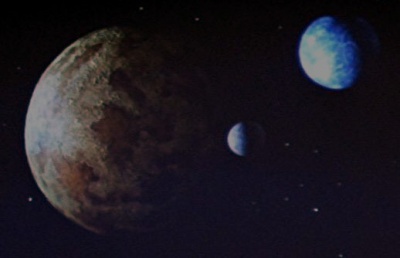 Nimbus III was the inhabited third planet in its star system. It was orbited by at least two moons. Nimbus III was established as a "Planet of Galactic Peace" in 2267 after the Federation-Klingon War. The United Federation of Planets and the Klingon and Romulan Empires agreed to mutually develop the planet, in the hopes that it would serve as a model for a new age of peace and understanding. An advertisement broadcasted from the planet claimed it to be "...famous for its wildlife and the fishing is terrific." Individuals who wished to move to this planet could finance their trip through Federation Federal. In reality, the planet was a desert world and the colonists chosen for the undertaking were among the most unscrupulous individuals in the galaxy, quickly taking to fighting amongst each other, fashioning their own crude weapons after the planetary government forbade weapons from them. Source: Memory Alpha

The USS Theurgy sent an away-team to Nimbus III, the shuttle launched ahead of their course so that Dr. Lucan cin Nicander, Skye Carver and Lin Kae could gather supplies before the Theurgy got there. Reports told of an industrial replicator lost in Paradise City, and aside from the acquisition of goods, the primary objective was to find and repair the replicator so that the Theurgy could get access to spare parts that were otherwise impossible to replicate aboard the ship.

The mission was a success, and along with the supplies gathered, Eve Jenkins left Paradise City in order to join the Theurgy's crew as their new Head Nurse.

William Robert O'Connell was born on Nimbus III, but didn't go on the mission.

Captain's Log, Star Date 57505.9. One week has passed since the USS Relativity showed up in our most dire need. We have set a course for the Nimbus system, where we hope to trade for spare parts and supplies that our replicators cannot handle. Our course is laid along asteroid belts leading to the remote Neutral Zone in the Federation-Klingon border. We travel with extreme caution and with extra power diverted to our sensor arrays. I have ordered an away team to head for Nimbus III and Paradise City, where the team might begin to trade for spare parts and supplies ahead of our arrival.

Sickbay is in sore need of medical supplies after all the fighting we have been through. Luckily, it seems that Paradise City has a good stock according to reports in our off-line Database. Therefore, after he volunteered to do so, I have decided to let our Chief Medical Officer lead the away mission to Nimbus III. This so he would be able to trade for our most needed medical supplies. To determine the possible availability of usable material and tools for the repair of our ship, Lieutenant Kae from Engineering will accompany him. I would have liked to send Mr. Neotin instead, yet the dry climate would not do well for him. Our Holographic Specialist has at least done some work on Thea before he leaves, and the XO and I have a new report to contemplate. For last, given that they will need a pilot as well as protection, a Tactical Conn Officer has been picked as the third member. Ensign Skye Carver will be piloting the Runabout and make sure the team does not run into trouble in the quite... disreputable Paradise City.

Furthermore, it seems the crew if coming to terms with what happened at Niga. Only some of us will have to live with the consequences of our corrupted actions, and try to tell ourselves that what we did was not our own acts, but the depraved influences of an alien virus. A small comfort, for some of us, yet at least there is hope for our primary mission - that we will succeed in our ultimate endeavour.

"Splendid, Ensign." With his hair on end in a strangely becoming way, Dr. Nicander smiled as he hefted his bag and tapped his fingers on the controls, opening the door that would take them out into their hidden spot in the dessert. He produced his phaser and held it by his hip as he looked outside. Meanwhile, his two companions were talking inside, and it sounded like the engineer was apologising for something. Lucan considered whether to shoot them down now, or to use their extra pairs of eyes to watch his back while in the city. He would not be able to take the Runabout since the Theurgy would know what to look for, and the Runabout was not fast enough to escape. No, he had to arrange some other means of transportation. He needed them a while longer.

After taking in the dunes outside, watching for any movements on the ridges around them, he soon looked inside again. "If we set a brisk pace, we'll be on the streets of Paradise City before the sun sets." Raking down his bed head hair, he added the obvious with a smile and shrug just for the sake of preventing mistakes even though they knew they were to travel incognito, "Make sure you hide any Starfleet issue equipment and that our gold plate latinum is not spotted by anyone unless we are trading for something."

He led the way outside then, and the late afternoon sun made his white billowing clothes gleam in the wind. The sand swirled softly around the landing struts of the Runabout - stirred by the smallest promise of a breeze. "Ahhh... An hour or so walking the desert," he said with a grin, white teeth matching his garments, "though it is no mountain trail at a couple of thousand feet of altitude, where the winds are truly alive and you have to gasp for air once they course over you... I most definitely feel alive again! The winds know I have missed open air!"

And it only got better once he crested the circular dune formation that hid their shuttle - his legs and sandalled feet pumping sand to get there - and saw the scar upon the desert horizon. Paradise City; setting the rest of the vista in perfect comparison to what had been created and what was nature itself. A filthy city in a vista of beauty: a harsh beauty of a land scorched. That was why he liked it. Few things dared the open, parching daylight - the scolding heat of the sands in which he stood. Nature's face of death. For it was a beautiful and dead wasteland: the pure nothing of the planet.

In a way, it was a wide and gaping wound upon the land, and Lucan being a doctor, he saw the city as a formation of dry puss - the inhabitants tiny bacteria. As he waited for the others, he pocketed his phaser pistol and looked their way. "I would suggest we visit a tavern first for drinks after the hike, and to listen for gossip about the things we need. Ensign Skye, would you take point?"

It was not like the vista around them would look any less appealing with the Wolf's bottom wiggling in the foreground...