The following is a list of named non-player characters who served in the CONN Department during the USS Theurgy’s battles against a corrupt and compromised Starfleet.

Lieutenant Commander Arron Lynn was the USS Theurgy’s Chief Flight Control Officer before being Killed in Action in January of 2381. Lynn was replaced by Ensign Lawrence O. Lance before he too was Killed in Action. 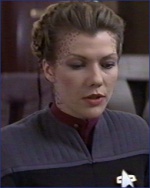 Ensign Nizni Peri was a flight control officer aboard the USS Theurgy in 2381. An unjoined native of the planet Trill, she had a sister in Starfleet and had expected to follow in her footsteps. Instead she had joined a ship manned by fugitives who had been subject to mental domination at least twice that she knew of.

During the attempted hijacking aboard the Theurgy by Captain Vasser and Commander T’Rena, Peri was assigned to the vector three battle bridge along with fellow ensigns Kenneth Urban and Pavel Viktorovich Yelchin. Peri considered joining Vasser’s supporters, while Urban and Yelchin suggested staying at their posts or retreating to their quarters until a commanding officer was determined. She followed Lieutenant Commander Carrigan Trent when the bionic intelligence analyst took command of the bridge, reporting on the status of flight control systems. She was killed by T’Rena when the Vulcan entered the battle bridge to eliminate Trent and any other resistance.

Sh’muk was a Vulcan helmsman serving aboard the USS James Kirk in 2377. In March of 2381, Tessa May Lance recalled him as being a master at the Terran game of pool. Later that month she remembered that Sh’muk had claimed that his species “had been spared from having to suffer the burden of alcohol.” 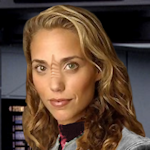 Mala Kariko
image by Sci-Fi Avatars]
Mala Kariko was a Bajoran CONN Officer serving on the USS Theurgy. She was inquisitive and outgoing though a bit on the shy side. Mala could be a bit scatterbrained at times, easily losing things like her PADD's, combadge, etc.

Mala was of average build for her size, all 5ft 2in of it. She grew her (died blonde) hair out to just below her shoulders, letting it fall naturally into place in a clean but messy style. Her face was soft, brown eyes split by a delicate set of ridges along her nose, the trademark feature of her race. She kept herself in shape through regular exercise though her body didn't display much tone or muscle. While she wouldn't win any strength contests she was surprisingly strong for her stature. One distinct difference however was a lack of the traditional Bajoran earring, the earring being symbolic of a belief she did not hold.

She was assigned to the Vector 03 Battle Bridge as part of the Continuance Protocol on the day that the Savi abducted Captain Jien Ives and a number of the Theurgy’s other officers and crew, including Thea. She was at the helm when the Shield encountered the USS Cayuga and remained at her post when the Asurians attacked. (V03)

Petty Officer Second Class Kalen Jinnai was a Bajoran flight control specialist who served aboard the Harbinger in 2381 and was mentally conditioned by T’Rena to follow the Vulcan’s twisted agenda. He and a number of his shipmates managed to flee the destruction of the Harbinger in an escape pod and touch down on the northern hemisphere of planet EL734 Nova Arctys. When the methane atmosphere of Nova Arctys released a rain of diamond crystals Kalen and Yvette Conway were in EV suits and had taken shelter in a cave. The rest of the survivors of her escape pod perished when the pod was damaged by the mineral downpour. As a last resort, Yvette and Jinnai lit the methane gas of the next storm as a last beacon for aid.

The conflagration was noted by Natalie Stark, ThanIda zh'Wann, Aisha S'Iti, and Doctor Maya who had taken the USS Allegiant on a Search And Rescue mission to recover the Harbinger’s survivors. When Conway and Jinnai were beamed aboard, the sight of zh’Wann, who had previously been taken prisoner aboard the Harbinger, was enough to cause the two castaways to fight their rescuers with all the force their desperation could summon. Jinnai was killed by ThanIda zh'Wann, who was forced to slay him in self-defense.