Sarresh Morali was the Temporal Affairs Officer on the USS Theurgy. Morali aided in the opposition against the parasites that compromised Starfleet Command in the end of the 24th century. 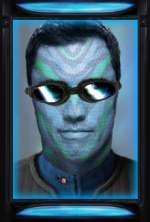 As per the Temporal Prime Directive, all information relating to the background of Sarresh Morali prior to boarding the USS Theurgy as of stardate 57505.7 has level 10 classification.

The official records of Sarresh Morali have been heavily suppressed, given the nature of the man's past, which is to say, the the United Federation of Planets’ future. The following is mostly supposition and what amounts to educated guesswork. There are sketchy records of his birth on the planet Ash'kara within the past century. He is recorded as having grown up in one of the more rural communities, specifically near some of the more impressive geothermal vents bubbling up from the ocean floor of Ash'kara. What can be confirmed is he was an excellent student in both History, and Physics, even though the location he grew up in was more a farming community, then an academic one. He eventually relocated from Dedpol to Telona, for schooling, as the later was one of the premier university locations on the home world.

It was in the middle of his schooling that the Ash'reem broke the FTL barrier, and encountered the Federation. This, in turn opened the young man up to a whole new world of opportunity. it can be confirmed that the young Ash'reem eventually graduated, upon achieving adult hood, form one of the more prestigious institutions in Telona, although which particular institute is no longer on record. before accepting a position to further his research and education and Memory Alpha, the Federation knowledge base. This was the last official record of location for Sarresh.

For years he stayed on Memory Alpha, seemingly content to grow his knowledge base. A small collective of Ash'reem had all transferred to the base, and as such, were able to avoid most of the isophobic tendencies the communal species develop when not surrounded by groups of their own kind. They seemed intent on contributing where they could, though an disproportionate number of the collective focused on medical research. Sarresh is recorded as having focused on Physics primarily, beginning to branch into temporal mechanics on the side, showing increased aptitude.

In 2366, there was a small spatial phenomenon that sprung into existence in the Memory Alpha system. All sensors were wiped out for approximately 1 hour. two teraquads of data were stolen from the Memory Alpha database during this hour long incursion. And this was the last reported sighting of Sarresh Morali. From this point, until stardate 57505.7, Sarresh ceased to exist. Conjecture is that the young Ash'reem was "lost" in the time stream as a result of whichever faction opened the spatial anomaly in the Memory Alpha system. The Department of Temporal Investigations believes that Sarresh was picked up by the USS Relativity, a known entity from the Starfleet of the 29th century, something of a temporal Flying Dutchman. Regardless, what, exactly Sarresh did during his time aboard the time ship, aside from spotting the rift that lead to the incident at Niga is completely unknown.

Since returning to the time stream, entries indicating that Sarresh has served in Starfleet have appeared in all Federation databases, with a commission date at some point during the 15 years since his disappearance. As of 2381, he held the rank of lieutenant (junior grade). He was officially assigned to the Department of Temporal Investigations, Greenwich, England.

His whereabouts as of 2381 were 'officially' unknown (stationed on the USS Theurgy). During his time aboard the Theurgy he befriended Cadet Amikris Neotin a female member of his species serving aboard the carrier who became his paramour.

Sarresh Morali was a great help during the Theurgy’s fist encounter with the USS Calamity, identifying the 25th century vessel's capabilities and tactics. His input was instrumental in the success of the Theurgy and the Harbinger in driving it off and escaping it. Unfortunately, he was on the surface of Theta Eridani IV during the Calamity’s second attack and was critically injured during an unsuccessful attempt to rescue Cadet Amikris Neotin from a lake that had become both boiling and corrosive. So debilitating were his injuries that it seemed he was unlikely to recover, let alone survive. At Captain Jien Ives’ order Doctor Lucan cin Nicander proposed a radical treatment: Using the principle of the Aquatic Ape Theory, change Morali’s DNA to that of humanity in order to make his DNA compatible with the healing properties of the hormone found in Sar-unga Neleo’s Velsren sac that only members of her species possess. Thus, Sarresh Morali was reconstructed as a Terrestrial human and awoke to discover that he was no longer a member of the Ash'reem species. His eyes, damaged beyond repair were replaced with biosynthetic implants taken from a previous casualty.

During his time aboard the Theurgy, Sarresh was aloof and distant from his shipmates. After spending two years of his life traveling the timestream and working in conjunction with the crew of the Relativity, returning to the 24th century was confining for him. Theagent had never intended to return there, and therefore seems to hold a grudge, almost resenting the very fact that he is where he is. He's not the easiest to approach, and often responds with sarcasm. In the March of 2381, he was still dealing with a crushing sense of loss, not just for his life as a time traveler, or the loss of a lover, but for the loss of membership in his own species.

Like most Ash'reem, Sarresh was shorter and lankier then the average human male, and like all Ash'reem, he was much older then he looked. His build was lean, muscular, and toned from years of exercise. He kept his hair short, crop, and swept back off of his forehead. Previously, he possessed the moist greenish blue skin is of similar to other Ash'reem, but after his transformation resembled a brunette Caucasian male of middling height and indeterminate age. His eyes have been replaced with biomechanical implants that appear normal at a distance but are obviously artificial on closer inspection.