The Stalker-class fighter, as the craft would become known to the Federation, became the primary space superiority interceptor of the Romulan fleet starting in 2377, replacing the "Hawk"-class interceptor that fought in the Dominion War. The smallest combat craft ever known to be fitted with a cloaking device, the Stalker's true capabilities were only guessed at by Starfleet and the Klingon Defence Force. However, Starfleet Intelligence reported that the Stalker was a match for even the latest and most sophisticated Starfleet fighters, the Mark III Valkyries, with the cloaking devices expected to give the Romulans a significant advantage in any future conflict.

Unlike the Federation and the Klingon Empire, who were relatively late to turn to warp fighters as a concept in the 2370's, the Romulan fleet was already using sophisticated warp and sublight fighters throughout much of the 24th century. Romulan fighter pilots were carefully selected for excellence, trained heavily, and as a result, Romulan fighter pilots developed a reputation (mostly self-professed) as the finest in known space. Design philosophy for Romulan fighters embraced the elitism of the pilots, favouring increasingly small, hyper-maneuverable craft which could out-fly any potential opponent, relying on cloaking devices and hit-and-run attacks to dominate any engagement.

Throughout the 2360's, as the Romulan Star Empire faced potential conflicts with both the Federation and the Klingon Empire as well as the Borg Collective, fighter production was ramped up and, between 2360 and 2370, the existing cadre of fighter pilots was expanded tenfold. However, despite ongoing fears, the Romulans never engaged in full-scale war with either of its neighbours. After the disastrous Battle of the Omarian Nebula in 2372, senior figures in the Romulan admiralty began to realise that existing fighters, while more than sufficient for their enemies in the 2360's, were only just a match for Jem'hadar fighter craft. Moreover, Starfleet's production of the powerful Defiant-class escort provoked further concern, as projections indicated that current Romulan interceptors would struggle to counter the Defiants.

Thus, in early 2373, the Tricameron approved a project to completely replace the current Romulan interceptor, codenamed the "Hawk"-class by Starfleet. The Stalker would be even smaller, faster, more maneuverable and more heavily armed than its predecessor, equipped with a revolutionary miniaturized development of the cloaking device. The Stalker's mission profile would be to counter both current and projected next-generation Federation and Klingon warp fighters, ensuring space superiority for the Romulan fleet. Moreover, the Stalkers were designed specifically to hunt down and destroy the B'Rel bird of prey, the Defiant-class escort and the Jem'hadar scarab, as the craft was officially known to the Romulans. This would allow the warbirds to focus on their primary offensive role against larger foes.

Despite a pressing need, however, the high requirements for the Stalker resulted in lengthy development delays, and the craft would entirely miss the Dominion War. The older "Hawk" proved effective, far more so than the primitive Federation Peregrine, but the fighter cadre suffered catastrophic casualties throughout the course of the conflict. Worse, the Empire's neighbours now had detailed information on the Hawk, with Starfleet ships rescuing damaged Hawks and taking the opportunity to examine the craft, while the defection of a former fighter pilot to the Federation in 2373 was a substantial security failure.

As a result, once the final design of the Stalker was finalised, rapid production went underway immediately to replenish losses. By 2378, numerous squadrons of Stalkers had been deployed all over the Empire, from space fortresses to carriers and even retrofitted D'Deridex-class warbirds. Far faster and more agile than any known fighter design, with the advantage of superior pilots and cloaking technology, the Stalkers reasserted Romulan space superiority for years to come.

The Stalker had fewer weapons than its contemporaries, but its armaments also hit extremely hard. All of the Stalker's weapons were forward-facing with limited arcs of fire, fitting its role as a purely offensive craft.

The Stalker was equipped with twin heavy disruptor cannons, each cannon placed directly over a nacelle. While less precise than the Federation variant, the Stalker's cannons drew power directly from EPS manifolds connecting to the nacelles, providing yield far in excess of even Klingon cannons. The disruptors had a limited traverse of only twenty degrees on the vertical and ten degrees on the horizontal, requiring precise flying from the pilot to ensure a hit against a small and fast target.

Built inside the hull, the Stalker's countermeasures pod could be lowered from a compartment in the aft ventral hull. Pilots had a choice of a variety of countermeasure pods, ranging from decoy drones to mimic the Stalker's sensor signature, sensor-distorting chaff to counter incoming torpedoes, electronic warfare equipment and more. Some enterprising pilots even chose more exotic equipment such as a pod of micro-mines or a small battery-powered disruptor turret, providing a weak if serviceable aft weapon, compensating for one of the Stalker's main weaknesses. When engaged in combat with a Stalker, enemy pilots never knew what surprise the Romulan pilot had in store.

As part of their design goals was to counter larger ships like the Defiant-class escort and the B'Rel-class bird of prey, the Stalkers came equipped with four ventral hardpoints beneath their wings. Each hardpoint could hold a set of three high-yield plasma torpedoes, giving each individual craft a maximum alpha strike of twelve torpedoes in addition to their disruptors. A squadron of twelve Stalkers could theoretically, in a successful sneak attack, fire a barrage of 144 torpedoes at once, judged to be sufficient to cripple or destroy even the powerful Sovereign-class starship and Negh'var class battleship.

Due to the safety concerns of flying with such powerful munitions in combat, pilots only flew with torpedoes when sent to attack large ships. Furthermore, the high-energy plasma and antimatter of the torpedoes severely hindered the effectiveness of the cloaking device, particularly against sophisticated Federation sensors, a serious handicap in any engagement with Starfleet forces.

The Stalker came further equipped with two high-velocity micro-torpedo launchers, built along the centerline on either side of the cockpit. With a magazine of fifty plasma micro-torpedoes each, the Stalker had a potent weapon to attack the more heavily protected Federation Valkyries and Klingon Raiders.

A first for Romulan fighter design, the Stalker was equipped with a miniaturized artificial quantum singularity drive. The technology, first used on the D'Deridex-class warbirds, offered numerous advantages over conventional matter/antimatter warp cores, giving the Stalker considerably more power than its contemporaries, proving just as fast as the sophisticated Mark III Valkyries. However the AQS, essentially a tiny black hole contained within a subspace field, was a temperamental propulsion system. When a Stalker suffered severe damage, they had a distressing tendency to implode into the AQS, killing both crew members.

The Stalker, like the fighters that preceded it, came with an extremely sophisticated cloaking device, successfully miniaturized to fit inside the Stalker's compact hull. Utilising the enormous power of the AQS drive, a Stalker could cloak itself and fly undetected even at high warp. While the Stalker was unable to raise shields or use weapons while cloaked, the cloak nevertheless gave the Stalker a substantial tactical advantage. Only the most sophisticated Federation starships, such as the Luna-class, Sovereign-class, Odyssey-class, Iroquis-class and Theurgy-class, had sensors powerful enough to penetrate Stalker cloaks. 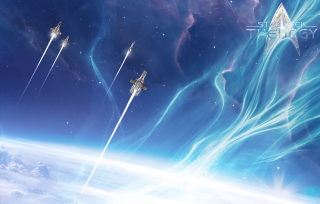 All Stalkers came equipped with two small escape pods, one for each crew member. The pods could be launched by either pilot or engineer, or if the computer detected imminent destruction of the craft. Each pod, little more than a shell around each crew member, was equipped with survival equipment and a subspace beacon, but had no methods of propulsion in itself. The "space coffins", as they became known to the Stalker pilots, were a subject of much anxiety. Numerous requests were made to fit an emergency transport system, which the Tal Shiar successfully stole from the Federation in 2380, by 2381, the technology was still being retroengineered for mass-use.