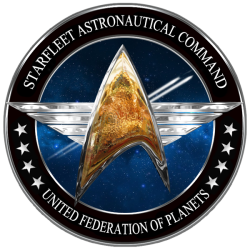 The formation of Starfleet Astronautical Command was heavily influenced by the successful deployment of Peregrine-class fighters aboard the starships serving as carriers in the fleet, which was deployed in the Dominion War. The Tactical CONN department belonged to this Division, and its officers consisted of fighter pilots with the white-collared uniform.

The year 2375 - after the conclusion of the Dominion War - the AC-205 Mk I Valkyrie line of fighters were launched, followed by the Mk II and Mk III in 2376 and 2378 respectively. Besides the Valkyrie-program, a competitive Interceptor-program was also implemented, resulting in the AC-347 Knight-class Interceptor being commissioned to starbases and planetary outposts throughout the Federation in 2377.