The USS Niger was a modified multirole interstellar craft stationed aboard the USS Endeavour. When the Endeavour was destroyed by a Borg cube in late February of 2381, her crew decided to trace the origin from whence the Borg had come, and even though its communication systems were damaged in the destruction of the Endeavour, the crew had faith that they might encounter another ship and warn them about the pending Borg thread to the Alpha Quadrant.

The Danube-class Runabout was first commissioned in 2363. This vehicle was designed to accomplish four main missions; the ability to perform rapid response scientific expedition transportation, the ability to act as an orbital or landed temporary operations base for science missions, the ability to transport intact experiment and cargo modules, and the ability to perform tactical missions such as intelligence gathering, covert insertion/extraction of personnel, and disruption of threat activities where feasible.

The Danube featured a front cabin for the crew of pilot, co-pilot/navigator and two mission specialists. A two person transporter was at the rear of the cabin, with swappable mission modules aft of the cabin.

The Niger featured a multi-mission module in the 'roll bar' that contained a prototype quantum subspace sensor package. Though by the time that the USS Theurgy encountered the Niger, this package was incomplete. It was designed to work in conjunction with the primary sensor suite located in the main hull to amplify the quantum subspace signature of quantum filaments, an astrophysical phenomenon that had proven quite hard to detect normally and quite dangerous to starships.

The Niger was also configured to operate as a science vessel, containing four science stations in the aft modular compartment. These were intended to be connected to the multi-mission pod to be used to configure the sensor package on the fly for the duration of the experiment. This however was not the case as the upgraded sensors were not completed so the science stations were left inactive.

The space craft also utilized a modified version of the standard LCARS Operating System. Personally programmed by Marlee Hailey so that the Runabout could understand the new sensor information being fed to the LCARS. This actually required a rewrite of most of the sensor code since the original had trouble accounting for the inherent instabilities in the quantum realm. By the time the USS Theurgy encountered the Runabout, this recode was incomplete rendering most of the Niger's sensors useless. The only sensors working were the proximity detection system in the primary hull and part of the prototype quantum subspace sensors which allowed the crew to track warp trails.

Everything else about this craft was base-line standard for the Danube-class Runabout line of space craft.

These were the members of the crew on the Niger after the Borg destroyed the Endeavour.

Early in 2381, the Endeavour was sent to a sector adjacent to the Azure Nebula to test a new sensor system intended to better detect quantum filaments, with the aid of several civilian scientists. They didn't get far with their experiments before the Borg attacked the ship. The opening salvo was devastating, all but crippling the ship in the first shots - and of course, the shots kept coming. Ducote himself wasn't on the bridge at the time of the attack, instead attending to a problem on one of the lower decks. One moment there was calm but for mediating a disciplinary matter, the next the alarm klaxons were blaring and the deck was heaving under him. It was enough to send him right back to Starbase 147 for an instant before reality reasserted itself.

Then the evacuation alarms sounded.

He headed straight for the crew quarters, directing people to the nearest escape pod racks as he went. He intercepted Blue (with Albert tucked under one arm) with some relief, before making sure she headed towards the pods through a safe section of the ship. There were still people to evacuate, and his conscience wouldn't allow him to leave until he knew no more could be saved. She extracted a promise from him to catch up, which he genuinely gave, and then they parted. Knowing Blue was safe (as she was going to get) was a great weight off his mind, and collecting the stragglers didn't take long. Ducote felt as if there should be more... before realising why there were so few.

Any remaining lifeboats were beyond his reach, however, due to collapsed corridors, hull breaches, or plasma fires. At length, he made his way to the shuttlebay, running down the final corridor only to bounce off the containment forcefield in the doorway that heralded a loss of atmosphere in the bay. He could just make out the tumbling mote that was the USS Niger - the science team's testbed runabout - in the distance through the open bay doors. Ducote gambled with his life, knowing the Endeavour´s shields were down but having no idea about the runabout, and drained some of the last of the ship's emergency power to site-to-site beam himself onto the shuttle.

Ducote materialised with not insubstantial relief and took charge of the situation. The hulk of the Endeavour hung in space, secondary explosions adding to the expanding debris cloud surrounding the ship, and he had to again confront the burden of losing people under his command. Amasov's years of influence on him helped him adjust his thinking, though, and he avoided a fit of despair. Instead, he planned to make the deaths count for something. They were still inside Federation space, which meant both that the lifeboats had a good chance of being rescued by friendlies and that those same friendlies would be in danger of Borg attack in turn. They had to try and warn any incoming ships of the exact scale of the danger they'd be in - but the task was complicated by the fact that their subspace communication array had been wrecked by damage sustained in the runabout's ejection from the Endeavour´s bay and precluded any attempt at long-range communication.

However, the partially-upgraded sensors on the Niger were capable of picking out the Borg warp trail against the background noise of the environment, and so the runabout went to trace it back to its origin inside the Azure Nebula. He couldn't abide the thought that his reunion with Blue might be in an assimilation chamber. 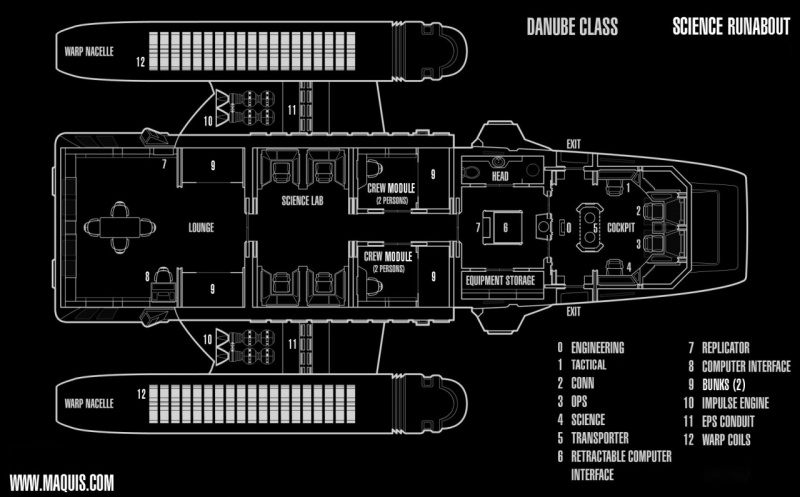