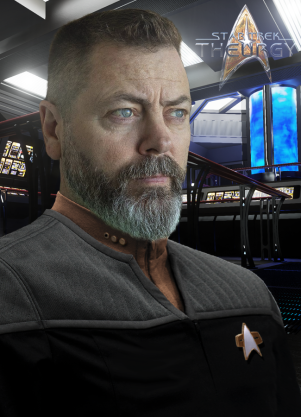 Lieutenant Frank Arnold was the Chief Engineer aboard the USS Theurgy, succeeding Lt. Commander Blue Tiran when she was KIA. Before then, he was a Materials and Metallurgical Engineer, who served a number of Engineering posts aboard Starfleet Vessels, including the USS Cortez, USS Akagi and USS Magellan. As of March 2381, Frank Arnold had defected to the USS Theurgy under captain Jien Ives. He aided in the opposition against the parasites that compromised Starfleet Command in the end of the 24th century.

Frank Arnold was born on September 3, 2344 aboard the Class 2 Mining and Ore Processing Freighter The Colliery, to James Eugene Arnold, and Diane Morrow Arnold. Jim Arnold was a well established foreman and chief owning operator of the Colliery's 38 Man Deuterium Mining and Refining Team, as well as the owner of the independently registered Colliery.

When Frank was aged 3, his mother Diane contracted an unknown infection while the Colliery was mining in the Alpha Onias system of the Beta Quadrant and performed rescue actions on an Andorian flagged survey vessel that had suffered massive system failures, and died in subsequent weeks despite medical intervention by physicians aboard both vessels.

Following his wife's death, Jim Arnold focused his attentions entirely on his work and his son, dedicating his time and works, to providing a viable educated future for his son, where he needn't roam and work in the torturous conditions of a freelance miner. Frank spent much of his onboard time being educated. Both by hard-nosed soot-blackened Deuterium miners and Lt Cmdr. (ret.) Hun Thao a Former Starfleet Academy Educated Exploratory Geophysical Surveyer who had served aboard a ship during the Federation-Klingon War. The miners taught Frank his image of manliness with storytelling, working with his hands, how to box and fight, and of course carouse with women.

Unbeknowst to much of the Colliery´s crew, by 2354 James Arnold had begun a working relationship with Starfleet Intelligence and Joseph Anderson; purchasing mining interests near Cardassian space and generating falsified Cardassian registries. Jim Arnold would provide secure courier services, data bouy maintenance near and within Cardassian Space, and even on occasion provided safe transport for Cardassian defectors or agents on the run, during the Federation's rising tensions with the Cardassian Union and later the Federation-Cardassian War.

It was through this relationship that Frank's entrance to the Ferros Corporation's Bessemer Academy Future Metallurgy Leaders Program was secured in 2360. Here Frank would spend 3 years learning Materials Science foundations, and later achieving 2 Degree Certifications, one in Materials Science and the other in Non-Ferrous Alloys and Multi-Latticed Composites. By finishing in the top 15% of candidates, Frank secured a recommendation to Starfleet Academy, with other choices having been to any of the major Metals Processing corporations as an Executive Project Engineer.

Entering Starfleet Academy in the fall of 2364, Frank sought to deepen his understanding of materials synthesis, as well as using the vast Starfleet Archives to explore the sciences of the Physical Universe. Frank joined a research project to enhance the density of Tritanium alloys used in shipboard armor plating, and structural bulkhead construction.

As an extracurricular, Frank competed in weightlifting, and boxing as a cruiserweight for the academy team, and backup for earth inter-Federation team, both popular sports among the miners aboard the Colliery. Competing in these activities often made Frank feel closer to home, numbing the unease of planetary life. 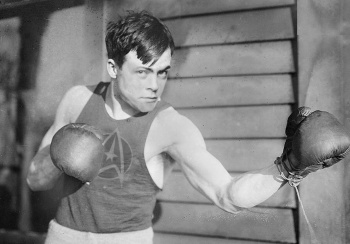 Throughout his academy tenure, Frank's father underwent treatment for Alveolar Silicoproteinosis and Lung tissue legions resultant of deuterium particulate inhalation. During visits to his father's treatment center at Starbase Medical Center in San Francisco, he formed a relationship with Admiral Joseph Anderson, the two sometimes dining together when the Admiral visited Starfleet Academy.

The Dominion War began 127 days after Frank's posting aboard the USS Cortez in 2372, where he would serve for most of the war, as a Junior Structural Systems Engineer. During his service aboard the Cortez, Frank had a close friendship, and eventual romantic relationship with then Lt. JG Jennifer Dewitt. The pair bonded over their mutual love of hunting and pragmatic nature. Dewitt was even occasionally able to coax Arnold planetside to hunt, rather than the holodeck. The nine month relationship ended with Jennifer Dewitt's promotion and transfer to the USS Rapier; although Frank would send occasional mail trying to remain in contact, even through Jennifer's punitive posting to the Black Opal (Frank was unaware of her new post due to its classified nature).

He would earn a pair of commendations in 2374, when the USS Cortez suffered ancillary-fatigue buckling of structural plating surrounding the maneuvering housings on the port nacelle. Subsequent decompressions resultant of systems failures incapacitated many of the off-shift Engineering crew, and Ensign Arnold, the only serviceable non-enlisted person, stepped in to organize damage control parties, leading an EVA action to seal the hull plating, allowing for the Cortez to arrive, albeit late, to the Battle for DS9, and later be one the first ships to break through Cardassian lines, breaking the Cardassian forces. These actions resulted in the award of a Starfleet Medal Commendation for 'meritorious action above the call of duty during a non-combat emergency' as well as a Proficient Service Medallion. During these actions Frank sustained plasma burns to his upper body and right arm, that would leave him scarred for the remainder of his life, despite dermal regeneration.

Halfway through 2374, he was temporarily assigned to the USS Exeter, for a 9-month officer exchange, this transfer came only 3 weeks before the USS Cortez disappeared. He would serve for 3 more years aboard the Exeter, eventually being promoted to Lieutenant Junior Grade and Lead Structural Systems Engineer, before being transferred to the USS Akagi for his knowledge of damage control, being appointed the ships Lead Damage Control Engineer.

In 2380 Arnold would be promoted to Lieutenant, and appointed to be the Assistant Chief Engineer for the USS Magellan. During his two year tenure, Lt. Arnold made numerous systems improvements to the Magellan, including a 16% increase in hull plating density, and 23% improvement in structural integrity.

During a routine supply and shore leave layover at Starbase 211, he was contacted by Admiral Anderson through the cover of personal mail from his father. Arnold was convinced by Anderson to abandon the Magellan, and report to the USS Theurgy, arranging transport through old familial connections that hid his travel to the IKS ChunDab from scrutiny, eventually rendezvousing with the IKS Vor'Nak and ultimately arriving at Aldea.

Growing up with the hard working crew of the Colliery imprinted Frank Arnold with a strong work ethic, and a healthy respect for the working man. An indomitable spirit, that often uses self-deprecation and humor to diffuse tension, that perhaps sometimes toes the line with too much forthrightness, or joking about things that perhaps are not funny to everyone. Further it provided him with the coping mechanism of a healthy sense of humor and friendly mockery of thick skinned friends. Cynic humor, and jovial optimism helped him to disarm many tensions in his life.

Learning among men who were happy to fight over insult, and make friend when they were done impressed a forgiving nature, and a healthy respect for violence, having learned to fight and later box at a young age instilled the man with a quiet stoicism, almost never heard to make a threat. Academy training and competition in boxing led Frank to have a disciplined approach to violence, often regarded as a resort reserved for the severe infractions.

The death of his mother at a young age, led to an increasingly close relationship with his father, that amplified the feelings of pressure and expectations that resulted from his father's determined focus following his wife's death.

A transient life aboard a freighter lead to a strong sense of self reliance, and a mistrust of non-physical assets. Long periods of adolescence spent either aboard freighters and stations, as well as early life trauma associated with a layover to deal with his mother's illness and death lead to a strong aversion to planet-side leave with terraphobic and agoraphobic tendencies.

His father's hands on leadership style passed on to Frank, however this permeated to a need to manage minor tasks rooted in fears of inadequacy and hints of impostor syndrome. This likely stemmed from the overbearing focus and pressure to succeed in education received from his father once his mother died; his own father likely feeling guilt surrounding his wife's death resultant of their transient space lifestyle.

Frank possessed a true passion for the Engineering craft, an old-soul with a nostalgic fascination surrounding old-world metal making. He idolized the men of yore, his prized possession cobalt lenses from an early 21st century steelmaking plant. He also was known to idolize their manly pursuits, including Water Fowl Hunting (typically within a holo-deck due to terraphobic tendencies), Pugilism and Woodwork.

Frank was known to possess attractions to strong, pragmatic women, and was known to say freely that pale redheads, or toned brunettes were always his favorites. A noted romantic with the need to please, Frank was known to play Jazz Saxophone under the name 'Jack Steel' as well as craft handmade woodwork gifts for friends and romantic interests. 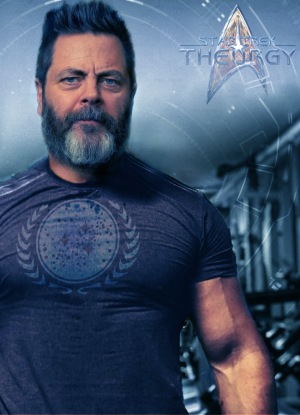 By the time of his service on the USS Theurgy Frank Arnold was 35. A full featured man, with a strong rounded jaw line, and a bushy brown beard. He possessed strong masculine features, including particularly large hands, and pale blue eyes. A man with a hard exterior, was often known to break into full bodied smiles. Frank was never seen without either a moustache or moustache and beard, following his ability to grow one, and always kept his hair cropped short and shaved on the sides (occasionally commenting there were no more than 5 acceptable haircuts for men), and was beginning to gray on his beard by 2380.

Frank had a well conditioned physique, with an extremely broad chest, a 52" measure. He possessed a powerful working man's frame which hinted at his past experience with full body weightlifts, and boxing. Frank was known to enjoy deadlifts. He had plasma burn scars that extend from his right collarbone and the tip of his right shoulder to his wrist (Running proximal to ventral), spanning the outside (lateral, including the tricep) of his arm from injuries sustained on the USS Cortez during the Dominion War. Frank's physique gave way slightly with age, but he was in good health especially with his passions for pugilistic activities on holodeck programs that included photonic boxing opponents from both his matches at the Academy, and historically famous fighting athletes.

Frank was known to occasionally make wind instruments and other fine wood-worked materials by hand for birthday gifts.

Among his prized possessions, was a pair of cobalt lenses used in Early 21st century steel-making, they were kept in a glass case in his quarters aboard the Theurgy.

He often enjoyed a Glenmorangie LeSanta and tinkering on a Triumph RX-45 Motorcycle before abandoning it aboard the USS Magellan.