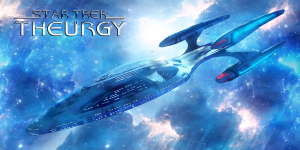 Image: The USS Theurgy under repair in the Azure Nebula. 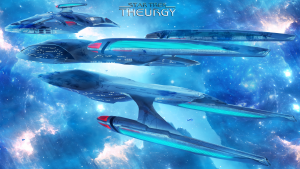 Image: Damage assessment conducted while the USS Theurgy was in MVAM-mode. In order to repair the hull of all three Vectors, the Theurgy had to be separated for the majority of the time in the Azure Nebula. 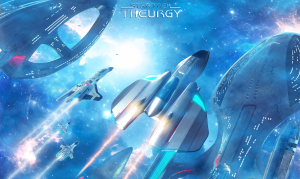 The Azure Nebula was an Class-11 nebula of interstellar matter, stretching into both Federation and Klingon space. The nebula was created in the year 2168 - 213 years before the events of the parasitic threat - by the supernova explosion of the star which was charted as FGC-SR37-758. The nebular gases it was composed of included oxygen, argon, theta-xenon, fluorine, and sirillium. Since sensors and other systems functioned poorly in many nebulae, the Azure nebula was used multiple times by starships in attempts to gain strategic advantage in evading or avoiding conflicts. In 2381, the USS Theurgy escaped into the Azure Nebula following the catastrophic failure of their mission at Starbase 84. Inside, the crew took time to assess damage and provide repairs to the damaged vessel.

The Coreless Moon could be found inside the Azure Nebula, orbiting Ithacae 3 in the Ithacae System.

In 2293, the USS Excelsior travelled through the nebula to rescue James T. Kirk and Leonard McCoy. When the ship encountered a Klingon vessel, the Excelsior ignited the nebula's sirillium gas to disable the battle cruiser.

In the part of the Azure Nebula where the USS Theurgy hid in March of 2381, the sensor-disrupting radiation that permated the whole nebula made it highly hazardous to both starships and their crew. Both Delta and Thermionic radiation forced the Theurgy and its fighters to utilize a special shield setting to withstand it. This prevented the use of regular shields, but it enabled safe passage through that part of the nebula.

While the radiation field was spotted by Stellar Cartography before the Battle of Stabase 84, the origin of the thermionic radiation had not been determined by the time the Theurgy first sought refuge there.

In 2153, Commander Tucker and Doctor Phlox determined that the organic power cells in Xindi-Reptilian rifles could be neutralized by delta radiation, raising the possibility of using portable EM emitters to disable the Xindi weapons. (ENT: "The Shipment")

In the mirror universe, Enterprise's warp core produced dangerous levels of delta radiation, causing noticeable disfigurement to Chief Engineer Charles Tucker. Tucker noted that, for every year of exposure to the warp core, one lost ten years off one's life expectancy. (ENT: "In a Mirror, Darkly")

In 2267, Fleet Captain Pike was conducting an inspection of a class-J training vessel, when a ruptured baffle plate exposed a large number of cadets to delta radiation. Exposing himself to a dangerous level of the radiation in order to rescue the cadets, Pike was severely injured and left an invalid. (TOS: "The Menagerie, Part I")

Exposure to delta rays could also weaken metals such as viterium. (DS9: "Valiant")

In 2369, Doctor Julian Bashir exposed a sample of the aphasia virus, grown on triagar solution, to a delta ray field at 120 millivolts. (DS9: "Babel")

The same year while on a rescue mission for the runabout USS Yangtzee Kiang, Jadzia Dax noted that the data from the long range sensors might be inaccurate because of an abnormal level of delta radiation from the star in a binary star system. (DS9: "Battle Lines")

The atmospheres of Y-class planets emitted discharges of thermionic radiation that could pose a threat to starships in orbit. (VOY: "Demon")

Thermionic radiation is harmful to lifeforms, but dissipates relatively quickly. In 2376, Captain Rudolph Ransom claimed that the USS Equinox's research lab was inaccessible due to thermionic radiation. Seven of Nine later discovered that the radiation was being deliberately maintained by three EPS conduits to keep the USS Voyager crew from discovering their exploitation of nucleogenic lifeforms. (VOY: "Equinox")