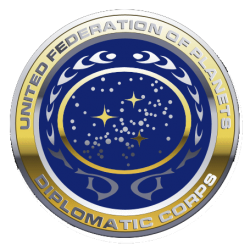 The diplomatic officer was a Starfleet position in use during the 24th century. The Federation Diplomatic Corps was an institution of the United Federation of Planets which was responsible for negotiating treaties with foreign states and maintaining inter-state relations and diplomacy within the Federation. The Starfleet Diplomatic Corps was a department within Starfleet's Command Division, and often the two organisations overlapped in deployment of personnel, officers and civilians alike sometimes representing both or either of the two organisations. The movement of personnel belonging to Starfleet was still governed by the Starfleet Transfer Regulations, just like any other officer. Diplomatic personnel in Starfleet (as opposed to those working for the wider Federation) were in the Command Division. The majority of diplomatic personnel were Line Officers (either graduates of the Academy, or civilian diplomats given a commission to work within Starfleet). Junior officers could be aides or junior members of a delegation. Less vital aspects of a negotiation could be handled by lower ranked diplomats, assuming it would not offend foreign parties, of course.

In diplomatic relations, there were also other positions and roles figuring during missions, and a few could be considered outside the actual Diplomatic Corps of a starship or starbase: