Doctor Arven Leux served on the USS Oneida as the Assitant Chief Medical Officer until his transfer to the USS Theurgy, where he served in the same position. He aided in the opposition against the parasites that compromised Starfleet Command in the end of the 24th century. 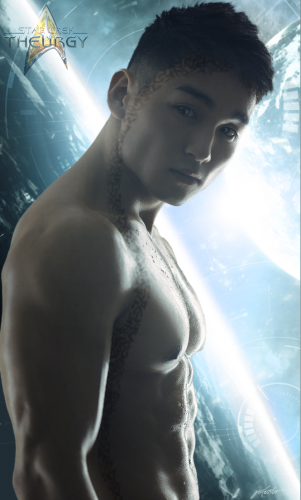 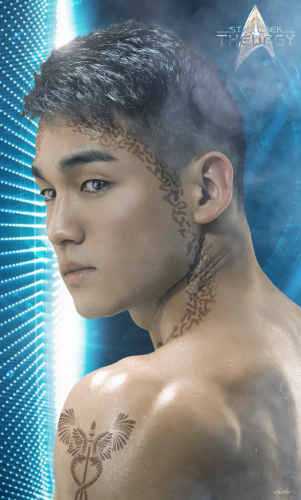 Early Life
Arven Leux was born to Sirva and Rorul Leux, two unjoined Trill in 2346 on the USS Rutledge. Arven's parents met and were stationed on the Rutledge together until it was clear that relations with the Cardassians were deteriorating to the point of War. Rorul remained stationed on the USS Rutledge for the duration of the War. At the same time, Sirva transferred to Starfleet Academy into a teaching role, and she remained there until her retirement in 2368. His father, Rorul, retired from Starfleet in 2366 after the formal end of Hostilities with the Cardassian Union at that date. Arven's childhood was fortunate in that his mother didn't move around much and never necessitated leaving the San Francisco Bay area to relocate housing. Even though his father spent most of Arven's life away from home, he did his best to be a presence in his son's life, receiving visits as often as possible whenever his father could take leave. In this way, Arven was given formative years with extensive grounding from his mother and informative, educational trips whenever his father was on Earth that found the Leux family visiting museums and cultural sites all around Earth.

To most children, and even to Leux, being dragged to his mother's work and around to museums and cultural events could be monotonous and something they wouldn't wish to go through. His life as a Trill raised among humans was something that affected him in subtle ways. Alternatively growing up an object of envy or scorn due to being seen as different, The removal of live on any of the Trill worlds lead to a sense of disconnection with his heritage. His exposure to trill culture only through his parents lead to a desire for him to fit in with his peers at school during his early life.

It laid the foundation for and supplemented an excellent education and fostered an interest in medicine. As he grew up, he began to appreciate the history of medicine the most. The young Arven was finding art centering on medical drawings and anatomy more intriguing than most other forms. The depictions of the human body by Leonardo Da Vinci were incredibly fascinating to the young man. For the growing child, it wasn't all medicine and anatomy, nightly strategy and logic games with his mother and duty permitting, his father led to a love of Chess, Go, and Kal'Toh, to name a few. In High School, Arven discovered a love of cycling, becoming competent enough to begin competing in the sport by the time he entered college, granted sponsorship to attend Stanford on the strength of his competitive skills.

College and the Academy

Arven attended Stanford beginning in 2364, where he would study medicine, much to the delight and pleasure of his parents. While other Trill his age may have been pursuing the potential of joining and applying with the Symbiosis Commission, Arven only ever felt a sense of confusion and loss for the heritage that he never had. As such, he threw himself fully into his studies at Medical school to distract from a potential world that he never knew. His pursuit of Medical School was his primary focus while at Stanford, but he remained on the University Cycling team, helping the team win several major championships. However, Arven misses the competitive career that might have been. However, he is delightfully pleased with his career as a Doctor. The time while Arven was at Stanford was primarily uneventful aside from the collegiate career in cycling. As a minor note while at Stanford, Arven discovered a love of cooking. The interest in food preparation developed while in a relationship with a pair of his fellow University students who studied Culinary Arts. Finding meal preparation much to his liking, he developed those skills as a means of handling stress and finding the preparation of a meal to be an intimate act that he could share with someone close to him. During his culinary exploits, he began to use some ingredients common to meals that his parents gave him as a child, doing his best to incorporate Trill ingredients where possible.

On finishing his Medical Degree, and without much urging from his parents, Arven joined Starfleet Academy in 2368 after his parents retired from Starfleet. His intent to use his medical degree on joining Starfleet was quite clear from the start by throwing all possible effort into his studies. While at the Academy, Arven continued his exploration of the culinary arts. Cooking was primarily a way of sharing intimacy and relaxation with those close to him. During his tenure at the Academy, he became less focused on his athletics due to the demanding course load that made Medical School look easy.

Graduating in 2372, the newly minted Lieutenant Junior Grade Leux received his first posting to the USS Honshu as a Medical Officer as a doctor with a specialty in internal medicine..

Arven's posting to the USS Honshu came in 2372, shortly before the beginning of the war with the Dominion the following year. After the start of hostilities with the Dominion, Arven wished to follow his Father's example during the Cardassian Wars. Arven remained aboard the ship, wanting to serve on the literal front lines of medicine. Participating in the war did come with a particular cost. During a mission of an unknown nature to the Doctor, the USS Honshu was attacked by Cardassian forces and destroyed. The engagement with the Cardassians precipitated a mad dash to an escape pod where Arven was trapped with several other personnel. Due to the speedy nature of the recovery of his escape pod, it became quickly evident that the Cardassians had captured him and an unknown number of others. The moment that his pod was pried open by the Cardassians, he was stunned and then held in a brig for the remainder of a journey to Cardassia Prime and a POW camp.

His initial time in the camp was filled with torture, mistreatment, and interrogation. The initial treatment that he received could have been chalked up to the brutality typically shown to Cardassian prisoners. However, since Arven was Doctor and an extremely junior officer, Arven was proved to know nothing of value to the Cardassians. In addition to the fact he was an unjoined trill, Arven was spared from the potential for more experimental examinations or torture of a symbioant. This is the primary that fat Arven believes spared his life, he was viewed as an alien, but a mostly uninteresting one, along with that he was kept alive only to provide medical care to the other POW's thus freeing up any Cardassian medical personnel for their duties. The paltry amount of resources that Arven was given to provide the medical care needed to be stretched to their absolute utmost. During his time in the camp, he needed to perform a rather brutal sort of triage. Not just determined by traditional triage assessment, Arven was forced to prioritize care by the Cardassians for the prisoners deemed more valuable. Due to the higher intelligence value of the 'important' prisoners, Arven began to understand that by keeping them alive, there was a genuine chance that he was helping the Cardassians to gain intelligence.

His loyalty to Starfleet and his fellow prisoners began to be at odds with his oath as a doctor to "do no harm." By giving the medical aid to the prisoners that the Cardassians wanted him to treat, he soon realized that he was perhaps hurting Starfleet as a whole. So began Arven's hard times where he started to provide treatment to as many prisoners as possible, often providing the absolute minimal care to the "high value" prisoners. This triage that he performed led to the negligible and often inadequate care and recovery of the higher-ranking prisoners. The triage was counterbalanced by providing care to more patients by dividing up the resources that he had available.

He was rescued in 2375 following the end of the war and given extensive medical and psychiatric treatment for most of 2376, and Starfleet Intelligence determined his fate. Most of his actions in the camps became sealed in a Starfleet Intelligence file following the war's end and his repatriation to the Federation. His superiors decided to hide his actions following the debriefing of himself and his fellow prisoners by Starfleet Intelligence. Arven was deemed not to be subject to an ethics review and allowed to continue practicing medicine in Starfleet. Having survived this Ordeal Arven did two things. The first was to get a tattoo of a Caduceus wreathed with the words 'You are not Forgotten' on his left shoulder to signify his time as a POW during the war. The second was for Arven to take some of his mandatory recovery time researching Trill culture. Due to the fact that, to him, he'd lived most of his life more as a Human, than as a Trill, he wished to experience something that he felt that he'd missed out on earlier in life. While Arven doesn't yet know what it means to be a Trill, his pursuit of learning about who his people are only comes after his work, and his treating of his psychological scars.

Having his actions found defensible by Starfleet Intelligence, Arven was eventually returned to service in 2377 and assigned to the recently commissioned USS Oneida, thereby resuming his post as a Doctor. As an extension of the rehabilitation therapies he'd been through, Arven once again threw himself into his athletics. Taking up cycling on the holodeck with a vigor he hadn't pursued it with since his Medical School days, as well as spending extended periods lifting weights. Arven also poured himself into his duties as a Doctor. He began to show his use as a capable administrator, finding a particular niche assisting the operation of Sickbay as a whole. Through his first few years on the USS Oneida, Arven's professional and caring nature paired with his administrative skill led to his promotion to Lieutenant and earning the Assistant Chief medical officer position.

Arven Leux started as, and attempts to be a jovial man that always looks on the bright side of life. However, since his time as a POW at the hands of the Cardassians he has developed a cynical streak a mile wide, as well as a moderate case of PTSD. He attempts to combat this by distracting himself with his hobbies, most notably weight lifting, and other sports. Since the destruction of the USS Honshu he tends to avoid intimacy, not wanting to lose people that he is close to.

Since his recovery , Arven has begun studying Trill culture and information about the homeworld, feeling that he doesn't wish to lose a home he never knew.

Arven was tall, dark haired, violet eyed, with dark brown Trill spots, heavily muscled man with tan skin and powerful frame. Arven's physique is well defined and exceptionally powerful due to his hobbies of athletics. On his left shoulder is a tattoo in violet ink of a Caduceus circled by a wreath with the words 'You are not Forgotten'. This was acquired while Arven was on medical leave following his internment.

Arven preferred to cook French or Italian food when possible, doing his best to incorporate vegetables common to Trill cuisine.

Arven was unlikely to pursue sexual relationships with fellow crew members due to his PTSD and fear of loss, though he uses the fact that all of the crew are viewed as his patients.