The following is a listing of all of the named NPC’s serving in Starfleet’s Command Department during the Theurgy’s struggles against a compromised Starfleet. 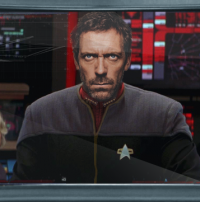 Admiral Sankolov was a flag ranking officer in Starfleet who was compromised by the sentient parasites that clandestinely took over Starfleet Command in the late 24th century. He was the commanding officer of Lieutenant Commander Carrigan Trent from 2377 to 2381. In response to the Theurgy’s discovery of the conspiracy and flight from Starfleet, Sankolov formed Task Force Archeron, and led it personally from his flagship the USS Archeron. He managed to damage Theurgy early in 2381, but the carrier escaped him and fled to the Mahéwa System. When he caught up with the Theurgy a second time in the Acamar System one of the ships from his task force, the Harbinger had discovered the conspiracy and defected, joining the renegade carrier’. He denied Captain Jien Ives and the Chameloid ’s followers the right to be taken prisoner under the Geneva and Seldonis IV Conventions citing offenses, both real and fictitious, that Ives and his crew had committed in self-defense while fleeing Federation space. He was thwarted when Task Force Archeron was incapacitated by a computer program that spread throughout the subspace command and communication links coordinating his task force shut down the computers of all ships under his command, allowing Carrigan Trent and Wenn Cinn to escape the Archeron and the Theurgy and the Harbinger to escape the task force.

Task Force Archeron was salvaged thanks to the USS Orcus, which provided clean software for the ships. Therefore, Admiral Sankolov could reach Starbase 84 in time of the Theurgy’s attempt to use its Simulcast system. Admiral Sankolov gave the order to attack the Asurian line of defence at the end of the Battle of Starbase 84, resulting in 95 % of all present Asurian saucers to be destroyed. While the Theurgy managed to warp out of the sector and into the Azure Nebula, Sankolov did not delay in sending his ships in pursuit.

The next time Sankolov appeared, he had split Task Force Archeron in two so that it might cover more of the Azure Nebula in the search for the Theurgy. While one half encountered a Borg tactical cube, all hands lost in the battle, Sankolov suppressed the knowledge of the fact - deleting the message from the USS Ark Royal that warned of the Borg presence. As an Infested, Sankolov already knew of the imminent Borg invasion. Instead, he diverted the attention of the remaining half of Task Force Archeron on finding the Theurgy. It did encounter the Helmet - Vector 01 of the Theurgy - but after the whole ship reintegrated and used an alien warp solution, his quarry managed to escape again.

Admiral Sankolov was last seen approaching the Battle of the Apertures, yet when the Theurgy was about to detonate an Omega Molecule device - and the USS Cayuga warned all the approaching ships of the task force - he ordered a maximum warp retreat from the Azure Nebula.

Knowing, however, that Captain Anya Ziegler was working with her old Commanding Officer on the Theurgy, Sankolov had her and her entire crew arrested and shipped off towards a penal colony. The wreck that is left of the Cayuga was brought to Starbase 234, a starbase under command of Admiral Owen Paris. As of April 2381, the whereabouts of Admiral Sankolov and the remains of Task Force Archeron is unknown. 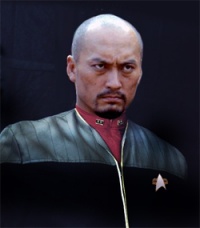 Rear Admiral Anderson
As one of the recipients of the real simulcast, Director Anderson of Covert Ops in Starfleet Intelligence was the ally of the USS Theurgy crew during the events pertaining to the parasitic infestation of Starfleet Command.

Having a previous affiliation with Jona Rez, a Lieutenant Commander in Starfleet Intelligence, Director Anderson was entrusted with the knowledge of the new threat to the Federation and Starfleet. Acting on his awareness, he ensured that the Theurgy got new resources and personnel through his channels, as well as backdoor access to the Starfleet database (which the ship had been cut off from before). He also sent Inej Avirim to liberate Anya Ziegler from captivity after the events in the Azure Nebula. The rest of the surviving USS Cayuga crew was also liberated, and they hijacked the prison transport in order to go into hiding. Inej Avirim, however, was one of the first officers to reach the Theurgy in the Epsilon Mynos System.

Before he arrived, however, Anderson's first act after getting the simulcast had been to enlist the help of an old operative of his, who managed to reach Captain Jien Ives. With the message delivered, Anderson and Ives was able to speak through the use of an astral eddy relay - leaving subspace messages to each other via an encrypted buoy. After that, better means of safe communication was established, but the life of Director Anderson was always at risk - the mere mentioning of his name under the wrong circumstances having the inherent hazard of making him a target for the Infested. 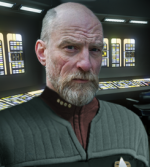 Captain Joseph Amasov
In 2367, Amasov commanded the USS Endeavour in the Battle of Wolf 359. In what he perceived to be his final moments, Amasov transmitted his analysis of the Borg: "In all my years I could never imagine terror such as this. Cold. Calculating... Murderous. It is just a matter of pure luck that any of us are alive right now. The Borg are as close to pure evil as any race we've ever encountered."

Miraculously the Endeavour survived the battle, the only ship to do so, and at the cost of half her crew. Amasov stayed in a hospital on Earth for some time following the battle. While still hospitalised, Starfleet held a hearing to discuss whether or not Jean-Luc Picard should be allowed to return to command following his role in the Borg attack. Amasov's log was played in the hearing as evidence against the Borg and, by extension, Picard.

Amasov continued to command the Endeavour into the 2370s and faced the Borg again during the Battle of Sector 001 in 2373.

In the end, Captain Amasov met his demise at the hands of the Borg outside the Azure Nebula, yet many of the crew of the USS Endeavour´s officers would survive the encounter - including (but not limited to) his First Officer, Commander Ranaan Ducote, Chief Engineer Blue Tiran, Chief Science Officer Vael Kaeris, Chief Tactical Officer Cross, Chief Counselor R'Rori, Chief Security Officer Kai Akoni and Chief Medical Officer Ayden Tyre. Most of these officers would later end up fighting the parasite threat in the end of the 24th century.

Captain Ducane was a 29th century Starfleet officer serving as commanding officer of the timeship USS Relativity when it made contact with the Theurgy in January of 2381. Although he did not leave the Relativity, he briefly contacted the Theurgy and let those aboard know that his people were not part of the conspiracy that had taken over Starfleet Command and that they were treating the virus spread by the pollen of the vegetation of the planet Niga. Although not explicitly stated, it is believed that Ducane is the same officer that relieved the Relativity’s former commanding officer, Captain Braxton. 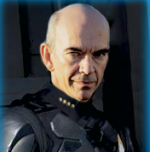 Holographic Captain of the Calamity

Captain X was the unofficial name given to the hologram claiming that he was the commanding officer of the USS Calamity, a starship from an alternate timeline hailing from the early 25th century. He was seen by the officers of the bridges of the USS Theurgy and the USS Harbinger in 2381 during the USS Calamity’s first attack on the renegade Starfleet vessels. He and his first officer explicitly stated that their mission was to destroy both the Harbinger and Theurgy and that no quarter would be given. T’Rena found his calm, rational ultimatum strangely reassuring. Given the mission parameters of the Calamity it was plain that the officers and all aboard the Calamity-class vessel were from a future where the alien parasites that took over Starfleet triumphed.

Because of the destruction of the Calamity by the heroic sacrifice of the Harbinger it is likely the holographic captain of the hostile ship was destroyed along with the ship. 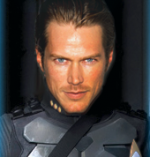 Holographic First Officer of the Calamity

Commander Y was the unofficial name given to the hologram standing next to the commanding officer of the USS Calamity, a starship from an alternate timeline hailing from the early 25th century. He was seen by the officers of the bridges of the USS Theurgy and the USS Harbinger in 2381 during the USS Calamity’s first attack on the renegade Starfleet vessels. He and his commanding officer explicitly stated that their mission was to destroy both the Harbinger and Theurgy and that no quarter would be given. Although he acknowledged the success the 24th century pilots were having against the Calamity’s, Reavers, he still insisted that the Theurgy had no chance. Given the mission parameters of the Calamity it was plain that the officers and all aboard the Calamity-class vessel were from a future where the alien parasites that took over Starfleet triumphed.

Just like his captain, it is likely the destruction of the Calamity resulted in his destruction as well.

Commander Anderson West, or Anders as he liked to be called in social situations, was the Executive Officer of the USS Cayuga. Anders had a hands off approach to managing the staff under him, preferring to let them run their departments with minimal interference. He was a joking sort, using humor to diffuse a situation, but was capable of being harsh when needed. He tried not to lean into the Starfleet pretty boy stereotype but as he was American, from Swedish decent, he cut a handsome figure and knew it. His previous friendship with Captain Ziegler meant that he served not only as her Executive Officer but as an adviser and moral compass.

West was killed by Asurian insurgents aboard the Cayuga when the ship had been stranded in the Azure Nebula. 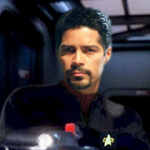