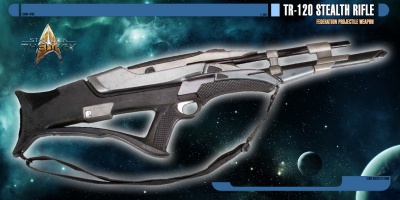 Developed for use against the Dominion. The TR-120 was designed to excel in dampening fields or radiogenic environments where conventional energy weapons would be useless. It fired adhesive multiple bullet like projectiles that, upon impact, would deliver a non-lethal shock via magnetic pulse that would incapacitate the Jem'Hadar soldier for an hour. The rifle was practically silent and had no muzzle flash or other visible effect, and thus was ideal for stealth combat situations. A working prototype of the weapon was developed but unlike its sister weapon, the TR-116 - which saw no real production, Starfleet opted to produce the weapon in limited amounts for use in specific mission types before abandoning the project all together. Overall the use of projectile weapons was not favored by Starfleet after the advent of the regenerative phaser.

Because the production of the TR-120 was very limited, many starships had little to no stock of these weapons in their armories. The USS Theurgy only had ten of these rifles in its stores at the start of its mission at Starbase 84.

The TR-120 looked similar to the TR-116 and could be operated with ease by both right and left-handed shooters.