Ensign Lauren Elizabeth Pierce was a Asst. Chief CONN Officer on the USS Theurgy. Before then, she was a flight pilot who served in Starfleet during the Dominion War and was a P.O.W. lost to the fleet from 2375 until the end of the war. Shortly thereafter she left Starfleet to deal with the trauma until she heard Tessa was aboard the renegade USS Theurgy. Since then, she has rejoined Starfleet, joined the Theurgy crew in the opposition against the parasites that compromised Starfleet Command at the end of the 24th century.

Lauren was born in 2354 on Mars, with her family who was starkly against a Starfleet career due to her Grandfather's mysterious disappearance in the late 23rd Century. Since then Lauren has been enamored by the stars. She strived for the thrill and fun having heard the adventures that await by having a career in Starfleet. She grew up well off but was always getting into some sort of trouble. Not due to wanting to be a problem but because she wanted to have fun and experience what the universe had to offer her.

She went to high school as most teenagers did and when able to, she immediately joined Starfleet with the goal of serving a long and illustrious career despite her parents' objections. Never having learned to fly a Valkyrie, she excelled at the smaller and larger ships having served occasionally on night shift on the USS Enterprise NCC-1701-E. Lauren loved the thrill of speed. She wanted to learn to fly smaller crafts, and so in that ambition, she enrolled later into Tactical Conn Academy but unfortunately never managed to finish.

MIMAS Station and the Dominion War

After her arrival at MIMAS Station for training, she met Cadet Tessa May Lance who reluctantly joined Lauren's adventure to gather intel on the Breen vessels in the Sol System. It was during this mission that the two were caught off-guard by the Breen. With Tessa being terrified, it wasn't until Lauren encountered more than she had expected and appeared to be blown into space dust but not before she transmitted the intel to Tessa to return to Command with.

Pierce was declared MIA and it was unknown at the time that the Breen had captured her before destroying her vessel. Since that time, she was a prisoner of war during the Dominion War until its conclusion and was treated in the harshest of circumstances. When the peace treaty was signed on Bajor, the Breen Confederacy released all of their POW's to the Federation. Her encampment however was one of the final ones to be released and the Thot in charge of their camp was a sadistic bastard who thrived on brutal means of torture. Not only was she was assaulted physically with beatings to the point of breaking her for her involvement with their mission in the Sol System, but they removed her right hand for punishment.

After her rescue following those events, Lauren resigned her commission to deal with the physical and mental trauma as she sought to recover and become rehabilitated from what she'd endured at that time. Although her body healed with scarring on her waist, and Starfleet fabricating her a cybernetic hand, her mind was still dealing with the trauma of being under their rule. As she'd traversed to Earth for the time of counseling, she tried to live as normal a life as she could without Starfleet.

It wasn't until early in the year of 2381 that she decided to re-enlist. Lauren was placed at Starbase 82 which at the time functioned as a subspace relay for comms traffic to Starbase 84. Curious by nature of the media reports about the USS Theurgy, Lauren began a search on the ship only to discover that the starship had been marked by Command as a renegade fleet vessel. All other information regarding the ship was unattainable for the lowly Cadet. Upon further research, it was discovered that her old friend Tessa May Lance was also aboard the now supposedly renegade ship. From what she could recall of the other woman, Tessa seemed more level headed and cautious when stepping into an unknown situation. Later on, a Simulcast was sent from Starbase 84, suggesting that the Theurgy and her crew were aligned with the Romulans and a defector for their fleet. This was something that Lauren also felt was out of character for her friend and continued digging, as little threads were revealed to her suggesting that something else was amiss with the situation. Especially knowing that she had to drag Tessa more or less into the issue that caused her to end up as a P.O.W. in the first place during the war.

Disturbed by the quandary before her, she drafted a formal letter to Starfleet Headquarters, where she questioned the sources regarding the Theurgy development. In her letter, she stated how none of the data suggested that it made any sort of sense. Not about to leave it in the hands of the Admiralty, Lauren also inquired with others in her communications post which left her with little friends and quite a few unwilling to speak with her about it. Paranoia much like her situation when she was abducted by the Breen tingled the hairs on the back of her neck. She observed the other crewman quietly whispering around her as if they and others just stood by and stared with a dead stare at her that gave her the creeps.

She continued to delve into the communication logs on Starbase 84. She inquired with the Admiralty again when her message was denied. She couldn't sit by and just forget what she'd seen. Although still only a Cadet, she was stirring up more than she realized on the Starbase and in Starfleet itself. It was here that Admiral Anderson discovered the mass inquiries about the Theurgy and inconsistencies in fleet communications from the Cadet.

As she was on comm log clean-up duties late into the night shift, she picked up a specific transmission between the Captain of the USS Endeavour and Ian Hawthorne, the CO of Starbase 84. This was long after the Simulcast had been sent, and in her appraisal of the situation, she discovered a priority communication from Captain Amasov stating they were attacked by the Borg and called Starfleet for backup which appeared to have been read but ignored by Captain Hawthorne for whatever reason. Questions of hers rose up as to why the Endeavour wasn't responded to.

Realizing that she'd put herself into a rather difficult place, especially with the consistent digging at the facts, Rear Admiral Anderson decided that the best way to save this poor woman's life was to get her out of the scope of the Infested. He quickly intercepted the transmission to her superior officers yet again about the attempted Borg invasion and the Theurgy. If he'd let her pass on her knowledge, she'd be done for. 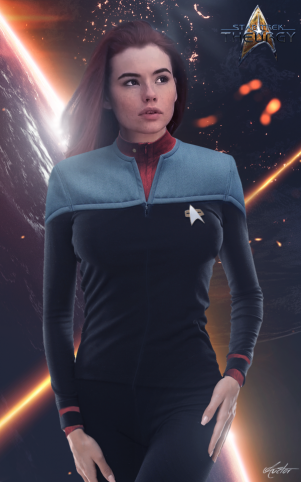 Anderson decided to contact Cadet Pierce from Earth via a heavily encrypted transmission and explained the truth about the USS Theurgy and what she's just got herself involved with. In order to preserve the woman's life, he decided the best course of action was to transfer, unofficially, Cadet Pierce to the Theurgy. In doing so, Anderson also field promoted Lauren to an Ensign to serve aboard the Theurgy as another CONN officer and give her a chance to make a difference. Lauren was assigned to join the other incoming Starfleet officers aboard the IKS Kajunpak't to replenish the ranks of the lost officers on the Theurgy. Although she was a lowly Ensign, she was capable of helping in other ways despite her brash nature. It was here that she joined the crew in their fight against the infected.

Lauren Pierce was a curious yet intelligent but stubborn individual much like her ancestor, however, she was more bull-headed when faced with an issue she believed she had the correct answer for. She was known to be slightly cocky in various situations. She is perky, energetic, and conflicted like her friend Tessa, however, she is brash a little more than she should be. The combination of these elements can cause her to get into trouble when she's not thinking but acting on her emotional state. She can be hot-headed but if the right individual talks her down she can come back to normal.

She suffers from Cleithrophobia or the phobia of being captured since being under the foot of the Breen for so long. She's also overloaded with hubris that often gets her into trouble. Her back shows some of this as she's been scarred for her disobedience while in the Breen prison camps. Her misplaced trust, excessive curiosity, pride, and lack of self-control are why she's in this predicament at this point in time and why she went missing during the MIMAS Station mission during the Dominion War. She has however grown spiteful of the Breen and slightly a bit of a troublemaker albeit not intentionally since coming home.

Upon her arrival, she discovered her ancestor Alana Pierce was brought aboard. She looked forward to getting to know her ancestor and learn about the role he/she played in the Starfleet of old. Another surprise for her was finding out her old friend from MIMAS Station, Tessa May Lance was aboard and a Valkyrie pilot. She wanted to make a difference and rejoin Starfleet being a misfit herself. Especially being despite her getting Tessa intel for the War, she broke a lot of regulations and so the safest place was to be part of the Theurgy's crew. She felt the need to prove herself to the badge and that she was something more than her circumstances. 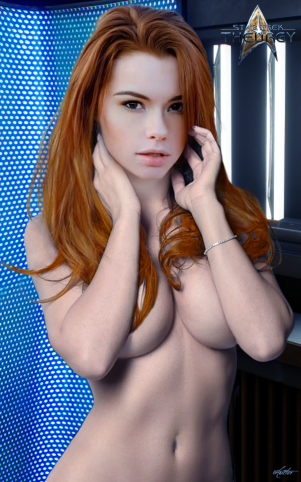 Like her ancestor, this Pierce was a beautiful red-headed woman sporting a slim, busty frame, and was strong from her time as a prisoner of war. She was able to hold her own against adversaries and unfortunately sports a scar on her waist from being thrashed for disobeying orders at the hands of the Breen. She has a cybernetic hand on her right side which allows her to move much faster and punch harder than one would probably expect. Like other women of Mars, she sports a large bust which led Starfleet to wonder what's in the water there. Her back showed scarring as she'd been attacked for her disobedience while in the Breen prison camps.

Lauren was skilled at navigation and unorthodox helm piloting being briefly a former student at Tactical Conn Academy. She wanted to prove herself a worthy crew member and learn from her new station in the fleet after being away so long.