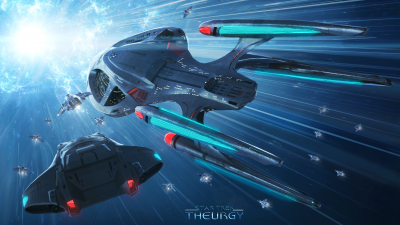 On this page, you can find Story Prompts, Writing Prompts and Token Rewards. Story Prompts are optional story-related sub-plots, while Writing Prompts are just general non-detailed writing ideas. Both lets the writers earn Tokens from the GM. A table below the listed Prompts will show how many Tokens each writer has earned in total. Remember that new Away Missions and incentives to write stories don't have to have any Tokens attached to them. The Tokens are not meant to be a requirement for story creation. They are just a fun thing created to reward writing of some plot development threads, to encourage those unable to come up with plot ideas of their own.

If a Theurgist earns enough Tokens, they can cash in a Reward as listed at the bottom of this page.

The below table shows available and unfinished Story and Writing Prompts for Interregnum 01-02. Story Prompts are meant as inspiration towards completion of Star Trek: Theurgy story elements between Episodes 01 and 02 in Season 2, while Writing Prompts are less detailed non-Story related activities or ideas to explore together with other writers who enjoy the same idea(s).

Some large story events not listed will be addressed independent of Story Prompts, but instead considered the natural development of the story. These events include, but are not limited to, a mission to the Azurite Station, a memorial ceremony, an approach of the Federation Embassy on Qo'noS and the research into an anyonic secondary containment beam that may remove the parasites from their hosts.

The below table shows unfinished Prompts for Episode 01: Advent of War. These Prompts are meant as inspiration towards the progression of the Episode's plot, and sub-plots that happen concurrently with the major story. The sum total of Martok Support Points (MSP) gained will influence the outcome of the Episode's ending, with Martok's continued chancellery on the line.

The below table shows unfinished Prompts for the Director's Cut board and the Parallel Universes "What If?" board. These Prompts are meant as inspiration towards:

If you have an idea for a new Prompt, PM the GM and pitch it!

Below are the Tokens earned by completing Prompts above. Only Theurgists who have earned Tokens are listed.

Below are the Rewards earned by spending your Tokens. Only Theurgists who have earned Tokens may cash in a reward by sending a PM with the request to the GM.

Here is the archive of old and already completed Story Prompts: