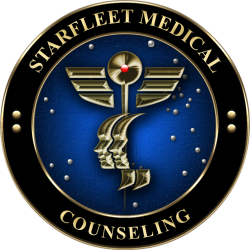 While Starfleet vessels had carried medical personnel since well before the beginning of the Federation, the widespread, mandatory use of counselors on starships and starbases began in the 24th century. Counselors were responsible for the mental health and well-being of all personnel on their starship or starbase, in exactly the same way that physicians were responsible for their crew’s physical health. The dividing line between these two duties was not always clear. However, in many cases the respective responsibilities of physicians and counselors were obvious. Physicians treated radiation burns and other forms of physical trauma, while counselors treated crew members suffering from various forms of mental stress, like anxiety, depression, or grief.

Even in peacetime, duty on a Starfleet vessel could be mentally taxing. Having the fate of dozens or hundreds of people depending upon your decisions was never easy, and the stresses of duty became far more difficult when fellow crew members were seriously injured or killed. While the crew of a Federation freighter might have spent their entire careers dealing with nothing more serious than routine maintenance, in Starfleet, starship duty was often far less safe. Rescuing ships in trouble, interacting with potentially hostile alien species, and investigating astronomical phenomena that proved to be dangerous were all regular parts of this duty. In the course of these missions, many crew members saw their fellows die, end up in situations where they were certain they will soon die, or witnessed the consequences of horrific accidents and deliberate atrocities. A skilled counselor often meant the difference between someone suffering lingering and increasingly problematic distress from these experiences, and that same individual finding a way to successfully process traumatic events.

However, while some crew members actively sought out their ship’s counselor, others were reluctant to do so. A good counselor needed to be aware of the stresses that their crewmates had undergone, and to look for symptoms of problems. Even more than medical officers, counselors regularly encountered patients who resisted their services, either passively by refusing to seek out a counselor when they experienced some emotional or mental difficulty, or more actively by refusing to discuss the issues they were having and even missing appointments when they were assigned to go see a counselor. Some older Starfleet personnel were resistant to visiting a counselor because they joined Starfleet before counselors were widely used on starships, and other individuals were either personally or culturally disinclined to discuss their emotions and mental states with anyone who wes not a close friend or romantic partner. Dealing with this sort of resistance to treatment or even evaluation was one of the more common problems that counselors faced. This process was made more difficult by the fact that while someone could be ordered to see a counselor, no order could force that person to go through the emotional work necessary to benefit from the process. If someone was sufficiently resistant to being helped, helping them might have proved almost impossible.

Although they rarely needed to do so, a ships’ counselor possessed the same authority as a ship’s Chief Medical Officer to remove someone from duty if the counselor believes the individual has a problem that may prevent them from effectively performing their duties.

A counselor was a position aboard Starfleet vessels and installations, usually held by a senior Starfleet officer with training in psychology. At the captain's discretion, officers in Counseling may be allowed to wear something other than their normal Starfleet uniform.

By the mid-24th century, starship crews included a counselor, who was responsible for the mental well-being of the crew and civilian staff. The position was considered vital enough that it warranted inclusion in the senior staff of the Federation flagship; in that instance at least, the ship's counselor also had a diplomatic role, advising the captain in First Contact and other situations.

On large starships like the USS Theurgy, counseling was a separate department with a Chief Counselor, Assistant Chief Counselor, Rehabilitation Officers and Morale Officers. The number of commissioned crew determined the need for such an arrangement, where a single person impossibly could preform his or her duties for the sake of a crew as large as the Theurgy.

Starfleet’s mental health counselors had been a large part of Starfleet's ability to manage trauma amongst the crews of its starships since the Earth-Romulan War reintroduced large-scale warfare to mankind and the psychological problems it could generate. In the beginning of the Federation, these trauma specialists and mental health professionals were assigned to starbases and Starfleet’s planetary facilities, as well as common shore leave destinations. Starfleet felt that placing counselors on starships would negate much of the help they could provide as some crewman felt seeing a psychologist showed weakness or an inability to do their job, or would cause their fellow crewmates to see them as weak or flawed. Keeping these services away from duty was seen to be needed to keep morale and confidence in the fleet up. By the end of the 2260s, Starfleet began to re-examine these policies as deep space exploration craft such as Constitution-class vessels would return after years away with crews that had far higher than normal rates of suicide, post-traumatic stress, depression, and anxiety. As the Federation expanded and exploration craft spent more and more time away from direct contact with Starfleet, the rates continued to increase until Starfleet saw too many of its highly trained officers and enlisted crew being unable to return to active duty with the same efficiency or skill as they once had.

Starting in 2275, after ramping up its recruitment and training program for people interested in a career in psychology, Starfleet began assigning a trained psychological professional to every ship in the fleet that was considered a cruiser, and smaller vessels at the recommendation of Starfleet Medical and the vessel’s Commanding Officer. The ‘Ship’s Counselor Program’ began seeing immediate success on many of Starfleet’s Constitution and Miranda-class vessels assigned to deep space duty. The numbers of crew that would have to be fully replaced on each return to a starbase due to psychological trauma lowered by over 70%. While there were still detractors, and with some species having a cultural apprehension towards sharing feelings or trauma, this program became the new standard for Starfleet in the decades to come. A typical ship’s counselor began their career with a graduate degree in psychology, often from a civilian university or other Starfleet accredited institution, and would be expected to work in conjunction with a vessel’s chief medical officer to provide clinical care to their crew.

Other duties included providing briefings to officers and crew on possible behaviors to keep an eye out for things that represent traumatic stress after away missions or shipboard accidents, monitoring morale aboard the ship, providing insight to the duty officer on which crewmembers may work well and poorly with each other, and ensuring crewmembers that had life events such as marriage, birth of a child, death of a loved one (to name just a few) were given the support or leave time they need to be able to later return to duty.

Trauma was something that was fairly common in Starfleet, and something any crewmember could have. Writers should work with the Game Moderator if they wish to have a traumatic experience in their character’s past. A ship being destroyed would most likely mean the deaths of many close friends and colleagues and perhaps result in survivors’ guilt or severe depression or anxiety about being in a situation similar to that original event. The loss of a close friend or family member could make a character suffer from complicated grief disorder, or the character may become overly protective of another person that resembles their lost loved one. Dealing with a plague or other disaster could result in characters suffering from PTSD, and even first contact situations where the species being contacted is physically unsettling to a character, or their culture held values antithetical to the character could leave them with anxiety or depression even if the contact was considered successful. Like past traumatic events, events that occurred during the story that could result in psychological trauma should be worked out between the writer and the Game Moderator.

One way of involving a ship’s counselor or a psychiatric character into the ongoing plots is to have the possibility of trauma occur to characters that have emotionally distressing events occur to them. This could be something akin to a friend or colleague dying next to them in a shipboard accident, living through a catastrophe, or even after encountering the Borg. Any stressful or dangerous situation could be the trigger for trauma that the character can’t stop thinking about. As before, this should be something that is discussed between the writer and Game Moderator to see if both parties feel that adding this into the plot will add to the enjoyment of writing the character or take it away. In other words, most characters can deal with minor traumatic events, but there are few that would be able to handle nightmarish events that would and should give them nightmares.

A ship’s counselor was a means to remove the effects of past trauma for a crewmember. The first step was to figure out the correct treatment. A Vulcan suffering from post-traumatic stress disorder would most likely balk at the suggestion of doing group therapy where feelings and emotions are shared, and likewise, an Andorian grieving the loss of a spouse may not find Vulcan meditation techniques to be soothing or helpful. The counselor may choose a method they are skilled or comfortable with, such as cognitive behavioral therapy, hypnotherapy, meditation, or pharmacotherapy to name just a few examples, or a combination of them. A crewmember undergoing treatment didn't get better overnight, as the trauma they suffered could have left deep mental scars.

These were counseling fields that was interesting for a counselor. As in real life, there was overlap between different field. Different fields of study and expertise informed one another, and officers may develop similar skills from differing origins.

While there were many prescriptions that may be used to treat mental and neurological conditions – for low intensity situations; structured, guided therapy and meditation could often be sufficient to reduce a patient’s stress levels and improve overall mental wellbeing. This field could be used anytime the counselor was attempting to provide counseling to another individual in a structured environment.

A sub-specialty that dealt with diseases of the nervous system, especially when it resulted in emotional or mental disorders. Counselors with this field possessed a strong understanding of both the physical structure of the brain as well as how that drove emotional and thought processes.

The study of intense mental and emotional disorders, education and training in psychiatry allowed the counselor to identify the disorder in question as well as potentially predict the patient’s behavior patterns and recommend treatment options.

A interdisciplinary field of study that considered the interpersonal and communal relationships and the resulting stresses those relationships could cause, particularly when those stresses resulted in other physical symptoms. This field was used whenever the counselor was attempting to diagnose or treat ailments that are believed to be from social or emotional stress.

One of the most common mental ailments that Starfleet officers suffered from, stress disorders appeared suddenly in nearly any individual when the circumstances were right. This usually involved some form of physical or emotional trauma, but the patient may not even be aware of how traumatic the event truly was for them. This field allowed for the accurate identification of different kinds of disorders, as well as the pharmacological and homeopathic methods of treatment.