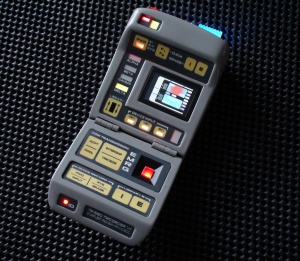 The Starfleet tricorder was a multi-purpose tool designed to be carried by personnel either whilst aboard ship or on away missions. The basic functions of a tricorder involved collecting data via a variety of sensors, analysing and processing the data via a compact onboard computer system, and presenting it to the user via a visual display and/or auditory cue. But this was barely the start of the capabilities of this amazing device.

Over the years Starfleet had used many different models of tricorder; the standard model in use during the mid 2360s was the TR-580. This unit measured 8.5 x 12 x 3 cm and had a mass of 353 grams. The two-part case was constructed of duranium foam, which was resistant to a wide range of environmental conditions. When opened the TR-580 presented a 2.4 x 3.6 cm display screen and a set of twenty four control buttons - the use of a full touch-sensitive screen was avoided to improve ease of use under potentially difficult field situations.

Power was provided through a sarium crystal similar to those used in standard phasers and was rated as sufficient for eighteen hours of continuous use of all sensor systems. Such levels of use are unlikely within the field, and in fact the average power consumption of a TR-580 was found to be slightly over 15 Watts.

Within the TR-580 were sensor assemblies which covered a total of 235 mechanical, electromagnetic and subspace devices. Of these, 115 were located in the directional sensor cluster at the top of the device, with the remaining 120 scattered throughout the body for all-around coverage. The unit was fitted with a detachable handheld scanner unit which contained 17 high resolution devices for detailed readings. The tricorder could combine input from any or all of these sensors in order to give the most complete possible image of the object being scanned.

Data processing on a TR-580 was provided by a distributed network of 27 Polled Main Computer Segments (PCMS) which co-ordinated all tricorder functions. Together these segments were capable of 150 GFP calculations per second; multiple functions can be run simultaneously, limited only by processing speed. Communications with other tricorders and compatible systems were carried out via a subspace transceiver assembly. Transmission rates were somewhat variable, but achieved a maximum in Emergency Dump mode of 825 TFP. Communications range was limited to 40,000 km - similar to the standard comm badge.

Data storage was provided by 14 wafers of nickel carbonitrium crystal and three isolinear chips; the former totalled 0.73 kiloquads, the latter 2.06 kiloquads each for a total of 6.91 kiloquads. The swappable library crystal chips were each formatted to hold 4.5 kiloquads.

The TR-590 replaced the 580 in the 2370s. This model was somewhat smaller at 7.62 x 15.81 x 2.84 cm and massed 298.3 grams. Part of the reduced mass was been achieved through switching to a polyduranide casing, although this is slightly less resistant to adverse environmental conditions than the duranium casing of the 580. Within the tricorder the layout of buttons and display device was retained, allowing this model to be issued without any changeover training.

The typical power usage was 16.4 watts, a 6% increase over the TR-580; nevertheless, an uprated power cell increased total endurance with all systems active by 100%. The available sensor units were also increased to 315, of which 189 were located in the directional sensor cluster. The detachable high resolution hand unit was been eliminated from the TR-590, the resolution of the onboard sensors having increased sufficiently to make the unit obsolete.

Processing speed was increased to 275 GFP calculations per second, an 83% increase. Total memory was increased by 32% to 9.12 kiloquads.

By the late 2370s Starfleet had moved on to a new generation of tricorder. The majority of the buttons were eliminated in favour of touch-screen controls, developments in touch screen technology having made them robust enough to deal with field conditions. The new unit had no less than 500 sensor units, all of them of a new generation of high-resolution devices. Processing speed reached 500 GFP calculations per second, while total memory increased to 25 kiloquads. The sensor and processing power of the unit was so improved that Starfleet considered this an "all purpose" tricorder, and did not produce a medical version as had been standard practice previously.