Commander Natalie Stark was Executive Officer on the USS Theurgy in 2381, succeeding Commander Ranaan Ducote when he died from fatal injury before the Battle of the Houses. Before then, she served as Chief Operations Officer. Stark aided in the opposition against the parasites that compromised Starfleet Command in the end of the 24th century.

Natalie was born and raised on the planet Mars. Her father was a dock worker at the Utopia Planetia, her mother a professor of physics at Bradbury University. Though the couple was an unlikely match, they had a happy marriage, producing two children; Eric, the elder brother, and Natalie, the younger sister.

From a young age, Eric and Natalie were inseparable. They would explore the canyons outside the city, get into all kinds of mischief inside the complex walls, and in general, be two loving siblings. Natalie adored her older brother, and strived to impress him the older they got. Eric, in turn, always made time for his younger sister.

By the time Eric turned 18, he had already been approved to attend Starfleet Academy. To celebrate his pending departure, the family booked a shuttle flight to a resort on the performed moon of Phobos. What should have been a routine flight ended drastically, however. A stray asteroid crashed into the shuttle craft. Normally repulsed by the shields, this asteroid instead smashed directly into the hull, forcing a small breech. The resulting depressurization caused concussions and blackouts among the passengers, and by the time shuttle reached the resort, only three people were left alive: the pilot, Chief Stark, and Natalie.

Ever since that day Natalie closed herself off from most normal interaction. She buried herself and her dreams in her brother's books, studying to enter Starfleet Academy as Eric had once dreamed of doing. 3 years later, with an early graduation and acceptance, Natalie Stark took her brothers place at the Academy.

Little is known about her time at the Academy. The few letters she sent home, combined with official reports, tell the tale of a talented but quiet cadet, determined to succeed but hampered by lack of interpersonal skills. She eventually graduated in the top 5th percentile of her class, having seemingly made only 3 friends while at the Academy.

The reconstruction efforts after the war, as well as the Tzenkethi affair prior to the ascension of the Mad Praetor of Romulus saw Natalie transfer to two ships, the USS Lexington aboard which she picked up her Masters Degree, as well as serving as an ODN Specialist, and the USS t'Zahn, where she was billeted as Ops bridge officer for the Gamma shift. Following the decommissioning of the t'Zahn, Natalie was promoted and posted to the USS Theurgy as Assistant Chief of Operations, shortly before all hell broke loose...

Quirky might be the best word to describe Natalie. People that first meet her, or have little day to day interaction with the office tend to find her quiet, shy, and almost timid; classical introvert. She will seem to often randomly spout observations, sometimes seeming to not have anything at all to do with the subject at hand, other times amazingly insightful and spot on. She works hard to overcome this awkward tendency of hers, but has had limited success. More often then naught, Natalie finds herself comfortable surrounded by PADDs, technical documents and holograms then she does people.

However, when she does open up, she can be a bright, cheerful companion, joking and teasing with a smile that lights up her face. It just takes quite a bit to get her to warm up. 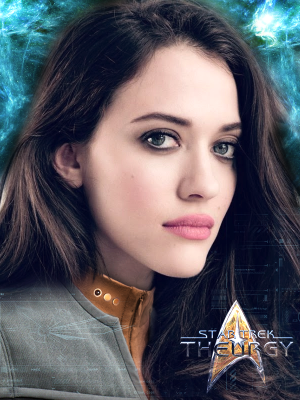 Image: Stark as Chief of Operations

Short for a human, with a slightly less then athletic slender build. She's not overweight or out of shape, but at the same time she's not a taunt runner or muscular guard. Curvy would be an appropriate word, not that she would ever use it. Her hair comes down slightly below her shoulder, and while is naturally very curly, she takes great pains to keep it straight as possible.

She has no distinguishing marks, scars, or tattoos at this time.