These prototype Federation Tactical Reconnaissance (FTR) Drones were found on the Black Opal and their assembly was completed on the USS Theurgy. These unmanned, small crafts were remote-controlled by Thea when deployed from her Upper Shuttle Bay.

Aside from their tactical advantages as decoys and their advanced sensors, they were also fitted with wing-mounted Type IV Phaser strips. Before deployment, they could also be fitted with a torpedo tube underneath the main fuselage, thus making them able to deal a singular, heavy blow against unsuspecting targets. Another advantage was also how they could emit false sensor readings, making them ideal as decoys or making an enemy think they are up against a full-sized warp fighter. 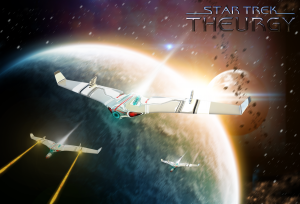 When these were found on the Black Opal in March of the year 2381, they were not fully assembled yet. Morwen Angharad, the base's Science Officer, had volunteered to a testing program. The conceptual plans were made by the Advanced Starship Design Bureau and the prototype parts had been shipped to the Black Opal for final assembly. Yet Angharad had only volunteered to the program out of the sheer boredom of her posting on the Black Opal, so she never finished the assembly. She did not have the required skills to do so, since she was more of a scientist than an engineer. Hence, the drones were abandoned for sake of more compelling activities. This was, of course, until the Theurgy arrived at the Black Opal.

Under the supervision of Simon Tovarek, ablative hull and advanced tactical sensors were added to the drones. The original plans had not included the tactical abilities that Tovarek gave it, so after Angharad didn't want to take credit for her intial work, it was decided that the drones would be named after Tovarek. Ten more drones were completed in time for the mission to Starbase 84, resulting in a complement of thirty Mk I Tovarek-class drones aboard the USS Theurgy by the time of the arrival to the base, and the mission to spread the truth about Starfleet Command.

Aside from the phaser strips, which can provide forward, aft, dorsal and ventral firing, the drones can use one hard-point option during missions, as listed below.

An experimental weapon that grew out of historic tandem-charge armour-penetrating designs. Attempting to achieve similar function from contemporary photon and quantum warheads was pointless; the detonation of the first would obliterate the second too early, and a submunition method was less effective than simply firing two torpedoes. Advances in material science led to a way to produce neutronium in small quantities - fashioned into a penetrator cap and coupled to a small subspace field generator, and driven by a single-burn impulse unit whose size belied its power, the nose of the missile could tear its way through alloys with even the strongest of structural integrity field enhancements, allowing the oversized antimatter warhead in the belly of the torpedo to detonate well inside the defensive screens of its target. Due to the projectile's large size and slower speed compared to the smaller conventional torpedoes, it was ineffective against shielded targets and had to be deployed against unprotected hulls to be useful.

Similar in nature to the photon torpedo, this was a photon torpedo filled with several micro torpedoes. Once the torpedo came in contact with an enemy or a surface, it detonated and fragmented into smaller torpedoes, which spread from the point of impact, also exploding on impact, resulting in a large pattern of torpedo detonations. Deployed correctly, this hard-point had the potential to cause severe damage when scattered upon enemy shields on impact. The torpedo snapped open by spring-force, and both the arming and the fuse was pilot-controlled by either manual or automatic settings. It could be armed prior to discharge or scattered by manual command.

Between the Battle of Starbase-84, and subsequently the Battle of the Apertures, all but one of the Mk I Tovarek-class drones aboard Theurgy had been destroyed, save only one that had been so badly damaged so as to miss the second engagement. For weeks it sat un-attended in the upper shuttle-bay collecting dust, until a requisition order was later put in by the Intelligence Department for it to be renovated with a new mission in mind. [[1]]

Drawing upon inspiration from 21st-century un-manned aerial drones that would loiter in airspace as ground operations unfolded below, the new Mk II Tovarek-class drones was intended to specialize in a hybrid ground support role. The already innate ability of the Tovarek to emit false sensor readings, coupled with modifications to the craft's hull, would then allow this new subtype to loiter in orbit of a planet in a mostly undetected fashion, masked from ground and ship sensor. From there, it was to provide overwatch of missions, as well as a host of other ground-directed support functions.

As such, it was given a new designation as an Overwatch & Ground Support (OGS) Drone. The OGS project was adopted by Lt. Frank Arnold, Assistant Chief Engineer of the USS Theurgy, and Warrant Officer Selena Ravenholm. Lt. Arnold was ultimately responsible for the hardware modifications on the craft, with WO Ravenholm responsible for sensor and processing software packages, as well as with the operation of the craft in Intelligence Operations.

All weapons modifications to the drone were designed with a ground directed approach. The decisions made by the design team for the A.F.R. Pattern adopted a philosophy of ground support, with an overall sacrifice in the defensive armament of the craft to be supplemented by enhanced passive evasion technology, and further up-armoring of the chassis, skin, and frame.

To support ground based operations, the external hardpoint torpedo tube was re-oriented from ventral outboard-wing, to a ventral 'belly' mount. This allowed for the delivery of the Hellbore or Hellhound munitions to surface targets in a 60 degree cone beneath the drone. These munitions could be directed by a sensor-lock from the on-board sensors, or by EM-radiation beams generated by a handheld tri-corder operated by a ground team, pointed at the intended target.

Additionally one of the Type IV phaser arrays was re-located from wing tip, to the ventral 'chest' position. The phaser array was placed directly below the nose of the craft, allowing for a 180 degree fire arc, spanning from 10 degrees above the nose tip, to 10 degrees below the tail addition that housed much of the ground support infrastructure. While this phaser could still theoretically be used on space targets, it was the intention of this modification that phaser fire could be directed in a similar fashion to the groundward torpedoes. Phaser fire could be targeted in the same manner as torpedoes.

Ultimately these modifications left the Tovarek drone with a single forward-facing phaser for space targets.

When modifying the Tovarek drone for intelligence, emphasis was placed on sensor avoidance, and a small footprint for the craft, providing for a low detection threshold, and therefore a reduced need for the drone to defend itself. The Type 2 ablative armor was coated with a micron-welded, layer vapor deposition coating of a custom designed Tritanium-Duranium-Ceramoid coating, designed by Lieutenant Arnold.

This coating was roughly a 85% Tritanium matrix, with a hexagonal close packed (HCP) structure, which housed interspersed Duranium-Ceramoid martensite lathes. Approximately 7mm thick, this coating increased the survivability of the Tovarek drone, while the single-crystal orientation of the lathes vastly decreased sensor wave reflection.

This mechanism served in a very similar manner to late 21st century stealth craft, providing a limited number of leading edges from which sensor patterns could reflect (instead being internally refracted and scattered) and ultimately making the drone appear almost indistinguishable from minor space debris, while masking additional warp core output.

This surface modification was combined with a sensor package provided by Selena Ravenholm of the intelligence department of the USS Theurgy. This package was capable of emitting false sensor readings, to make the Tovarek drone appear as a craft of as many as 800 different ship designations to foreign sensor systems, as well as appearing to be a passive probe, sensor buoy, communications array, or a number of other civilian infrastructure modules.

Ground support modifications were designed with the support of intelligence personnel embedded in an operations area, for away missions which could not be conventionally supplied with shuttle craft.

A transport field generator, projector, and buffer system were added to the drone, allowing for directed site to site transport independent of transport pads up to a range of 150 km from the craft.

Owing to the additional nature of these modifications, a structural addition to the drone was necessary. This addition came in the form of a docked tail, affixed midsection to the drone, at the rear of the craft between the wings. This sleeve was composed of the same alloy employed in the hull coating, and housed the necessary hardware to allow for transport systems.

The increased power demand of the additional weight of the craft, longer expected mission service time, as well as the mounting of 3 additional subsystems necessitated an increased warp core output. This was achieved with the addition of 2 EPS relays, however resulted in a power system that was spread incredibly thin, with a margin of excess power at only 6%, 94% of possible power output was consumed in baseline running. This translated to a requirement to shut down subsystems if high maneuverability (Such as in a dogfight) or higher warp speed were required, or if the craft was badly damaged. 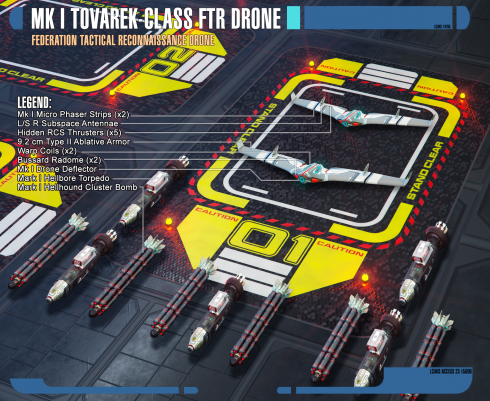