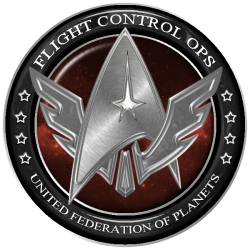 Flight Control Operations, or CONN for short, was the ship's helm department, which was in charge of handling all flight operations on and off the ship. This meant the Theurgy and all of its support vehicles or any vehicles flying within its vicinity. Instead of the Tactical CONN department flying fighters, the CONN officers operated the shuttles.

This segment describes the current situation aboard the Theurgy.

The officer at the Flight Control console on the bridge of a starship, often referred to as CONN, was responsible for the actual piloting and navigation of the spacecraft. Although these were heavily automated functions, their criticality demanded a human officer to oversee these operations at all times. The Flight Control Officer (also referred to as CONN or helmsman) received instructions directly from the Commanding Officer. An officer's ability at the CONN covered piloting craft of all sizes, from ground vehicles and shuttles, to grand starships. It also included expertise in all navigation — both on the ground and in space. They had to be able to direct a starship or other vessel through a difficult environment, or to operate a craft with such precision as to aid someone else’s activities. They had to direct a starship or other vessel to avoid a sudden and imminent danger, or to perform extreme or unorthodox maneuvers with a craft using “feel” or “instinct”. They also had to be quick and effective in getting into an EVA suit, including moving through zero-gravity, or resisting the deleterious effects of extreme acceleration or unpredictable motion without an Inertial Dampening Field.

These officers were also experts in judging the nature or intent of another vessel by the way it is moving, or determining the source of a problem with a familiar vessel. They also had to maintain professional decorum and etiquette when representing your ship or Starfleet in formal circumstances, or to argue effectively over a matter of starship protocol, or a course of action.

There were five major areas of responsibility for the Flight Control Officer:

During impulse powered spaceflight, the helmsman was responsible for monitoring relativistic effects as well as inertial damping system status. In the event that a requested maneuver exceeded the capacity of the inertial damping system, the computer will request CONN officer to modify the flight plan to bring it within the permitted performance envelope. During Alert status, flight rules permitted the helmsman to specify maneuvers that are potentially dangerous to the crew or the spacecraft. Warp flight operating rules required the CONN officer to monitor subspace field geometry in parallel with the Engineering department. During warp flight, the Flight Control console continually updated long-range sensor data and makes automatic course corrections to adjust for minor variations in the density of the interstellar medium.

Because of the criticality of Flight Control in spacecraft operations, particularly during crisis situations, Conn is connected to a dedicated backup flight operations subprocessor to provide for manual flight control. This equipment package includes emergency navigation sensors.

Image: How to state bearings.
There were five standard input modes available for specification of spacecraft flight paths. Any of these options may be entered either by keyboard or by vocal command. In each case, flight control software would automatically determine an optimal flight path conforming to Starfleet flight and safety protocol. The helm then had the option of executing this flight plan or modifying any parameters to meet specific mission needs.