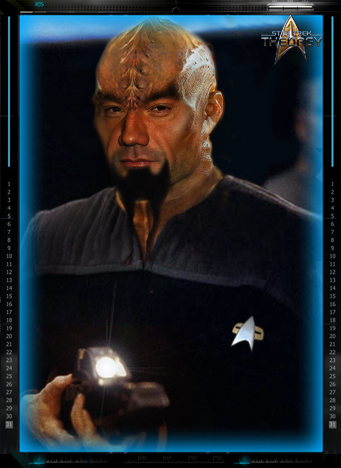 The Klingons were a humanoid warrior species that originated from the planet Qo'noS (pronounced Kronos). Originating from the planet Qo’noS in the Beta Quadrant, the Klingon Empire was a warrior dominated species and one of the major powers in the Galaxy. While there had been hostilities between the Federation and Klingons in the past, since the signing of the Khitomer Accords in 2293, the two powers had been considered allies despite several small skirmishes. One of the major powers of the galaxy, the Klingons were a proud, tradition-bound people who valued honor and combat. The aggressive Klingon culture had made them an interstellar military power to be respected and feared.

In 2376, a coup against Chancellor Martok was designed to throw the Klingon Empire into chaos and allow the two Klingons Morjod and Gothmara to become the new rulers of the Klingon people. This coup against Martok was ultimately unsuccessful, and Morjod and Gothmara were killed. Instead, the alliance with the Federation continued to prosper. In 2379 the two worked together in the construction of the Unity One station. The Unity base was an advanced starbase, representing the accomplishments of the alliance. As part of the design, the station's sophisticated sensor array allowed it to detect even cloaked vessels that were many sectors away.

In 2380, as the Romulan Civil War raged in full, Chancellor Martok accepted the Remans as a protectorate of the Klingon Empire, resulting in Klingon vessels entering Romulan space. Through the year, Klingon forces were involved in a number of skirmishes within Romulan space. After continued attacks and the failure of the Remans to successfully settle on the Ehrei'fvil continent of Romulus, the Klingons allowed the Remans to settle on a planet within the Klingon Empire.

Klingons were a species of bipedal tetrapod with a head, neck, torso, and four limbs that made up their body plan. They were a species that possessed anatomy and physiology remarkably similar to humans, but with several noticeable divergences. The most striking feature of Klingon anatomy was their cranial regions, which possessed striking sagittal crests which varied greatly between individuals, though familial lineages may possess similar crests. This was largely due to a protective exoskeletal casing which enveloped their craniums, though a shattering blow to the tricipital lobes of these casings can result in certain death. The rest of Klingon external anatomy was heavily ridged, with ridges on their feet, chests, and notably, a crest of ridges and spines which ran down their backs. Furthermore, male Klingon genitalia, while similar to humans, also possessed a series of ribbing and ridges along the shaft. Klingon skin tones tended to range from an olive tone, to brown, to an almost charcoal-black. Both sexes possess hair on their heads which was typically black or brown, and turned grey with age.

Internally, Klingon physiology was markedly different from human anatomy, and possessed numerous redundancies in a biological principle called brak’lul. Klingons possessed eight-chambered hearts, two livers, multiple stomachs, three lungs, and even redundant neurological functions. This rendered a Klingon with incredible stamina to resist injuries which would be debilitating for a human. However, unlike humans, Klingons possessed a notably decreased tolerance for cold temperatures, largely due to their own lower body temperatures. 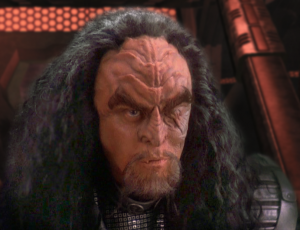