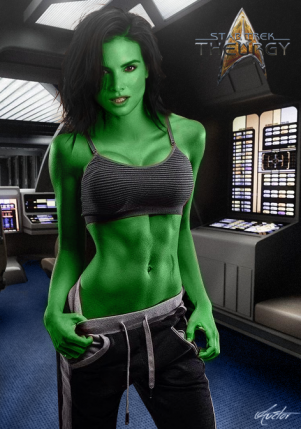 Lieutenant JG Dantius Thi Anh-Le was an Orion officer in Starfleet Intelligence. In 2381, she was assigned to the USS Theurgy by Admiral Joseph Nerva Anderson to assist with the vessel's mission to eliminate the parasite infiltration of Starfleet Command.

Anh-Le was raised in Vietnam by ethnic Orion parents whose ancestors had immigrated to the Federation after running afoul of a gang dispute in the 23rd century. Born quite literally on the transporter pad at a museum after her mother went into labor in the refreshment line and on-site medical personnel couldn't determine if the woman and fetus were safe to transport, Anh-Le would later enjoy joking about her unusual entry into the world. An athletic girl with a generally pleasant childhood, Anh-Le decided to apply to Starfleet Academy after a successful primary education, mostly because she hadn't settled on what she wanted to do with her life and Starfleet Academy seemed like a challenge.

A hard-working but somewhat aimless student, Anh-Le eventually settled on attempting to join Starfleet Intelligence after a conversation with an advisor in sophomore year, having mediocre at best command skills and lacking a passion for the sciences. She graduated in the top third of her class, and was a member of the Academy's competitive martial-arts and decathlon teams, where she never quite made it to stardom, in part due to a poor ability to delegate and in part due to suffering from burnout from overwork.

After getting her officer's commission, Anh-Le served as a junior analyst under Rear Admiral Joseph N. Anderson for several months, where she alerted the Admiral to a scheme by a Ferengi slave-trader to smuggle ex-Borg drones through the station with the help of a crooked Starfleet quartermaster, despite being offered a hefty bribe by the Ferengi when the latter realized that she was onto him, which earned her some personal career advice from the Admiral and a commendation.

After a few months in this role, Anh-Le decided after some encouragement from Admiral Anderson to take advanced tactical training in an attempt to qualify for field operator certification. (his exact words being, "you already spend two hours a day working out on the holodeck, you have good grades in phaser combat, you might as well apply for the training course") She passed, but was not immediately offered further field training due to a competitive class and her own weak leadership skills, and returned to her analyst role, now on the USS Tecumseh. In 2380, then-Ensign Dantius disabled a bomb set by Talarian terrorists who had attempted to take over the ship, and incapacitated the enemy leader before he could execute a hostage, earning a brevet promotion to Lieutenant junior grade and the Preantares Ribbon of Commendation for her actions.

In 2381, Lt. JG Dantius was on an errand to Starbase 82 (delivering a Nausicaan smuggler into custody) when she was read in to the ongoing parasite infiltration situation and transferred to "personal leave"--a ruse covering her reassignment to the USS Theurgy by Admiral Anderson to assist with the ongoing investigation. Already curious as to what could cause a veteran Starfleet Captain to defect to the Romulan Empire, Anh-Le was easily convinced by the Admiral's explanation of the situation, which made a lot more sense than the story Command was telling.

After going over the metadata on the Admiral's transmission to make sure that he wasn't the one who'd been replaced, took her "leave" and left for the Theurgy aboard a civilian freighter covertly hired by Admiral Anderson.

Anh-Le was generally friendly and personable, and unshakably loyal to the Federation. She was somewhat aimless as a youth, searching for a purpose in life, and only finding real fulfillment in confronting challenges and taking on difficult tasks. She could be a workaholic, and was poor at delegating responsibility, which led to her being deemed unsuitable for command roles. Her tendency to overwork and propensity to take unusual trains of thought suggested attention-deficit disorder, likely comorbid with obsessive-compulsive disorder. Anh-Le was somewhat obsessed with not using her pheromones on others, and had bad memories of using them in combat during the incident that earned her the Preantares Ribbon.

On duty, she was professional and collected, and took hormone suppressants religiously to counter the production of Orion pheromones by her body; off-duty, she was leery of romantic entanglements due to a dislike of being associated with negative stereotypes of Orion women and worry over the consent issues associated with Orion pheromones, and preferred to enjoy herself by exercising, practicing archery, or playing deliberately cheesy holoprograms simulating pre-warp television serials. She spoke Vietnamese (her native language), Federation Standard English, tlhIngan Hol, and some Romulan, Cardassian, and Orion, mostly so that she could better analyze messages in foreign languages without relying on a universal translator's sometimes-clunky approach to idiom.

Anh-Le was an attractive Orion woman, with long, dark hair that she normally kept in a bun; a trim, athletic physique; and dark brown eyes. She had a 6-inch scar on the lower left side of her abdomen, from a Talarian's knife, and didn't care enough to cover it up. Though she did not often wear makeup, she was considered attractive by many humanoids, and had an easy smile.