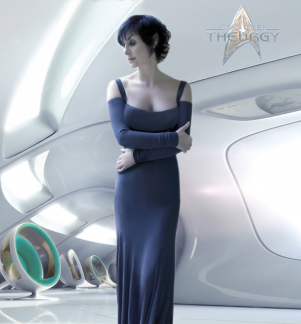 Doctor Maya, M.D. served on the USS Theurgy during the battles against the corrupted Starfleet Command in the late 24th century.

Maya was born almost three centuries ago in a repressive, conservative region on Vulcan. She entered the medical field as a sexual therapist while working her way through medical school. During pon farr, the time of mating adult Vulcans undergo a neurochemical imbalance that takes on a form of madness culminating in the plak tow, or blood fever. If left untreated, a Vulcan will die in an average of eight standard days. Not all Vulcans are married, so a specialized medical service exists to provide the needed treatment that all Vulcans need.

Maya specialized in nervous disorders at the Vulcan Medical Academy and is considered one of the foremost neurosurgeons in the sector. While training for psychology courses, Maya studied telepathic techniques in order to help the mentally disabled. It was discovered that she was a natural telepath. Maya’s family wasn’t wealthy or well-connected but she did manage to get her medical education subsidized by the Vulcan High Command in exchange for serving aboard one of their starships. While serving aboard the D’kyr she learned about the Interspecies Medical Exchange.

The Interspecies Medical Exchange was an interstellar program initiated by the Vulcan High Command in the late 2130s. The program involved several Alpha and Beta Quadrant governments, including: Earth, Vulcan, Denobula and Mazar. It was a medical exchange program that allowed doctors from each planet to volunteer their services on alien worlds with the intent to better their understanding of xenobiology. Although her own people showed little interest in the program Maya was fascinated by all the different cultures and peoples. She mustered out and entered the program as soon as she could. While serving with the Medical Exchange she learned the same thing the Vulcans taught humanity back in 2063: That there were other cultures out there and the way of life one grew up with wasn’t the only one available. This was what she had been waiting for: A chance to see the galaxy, meet new people, and make friends. In other words: Start over and find a place she truly belongs.

When the Earth/Romulan War broke out, she volunteered to be the ship’s physician for the USS Discovery, the fourth of Earth’s NX class starships. During this time she was exposed to human culture and entertainment including movies that she used as models for human behavior in later years. She befriended the Discovery’s officers and crew and made an effort to stay in contact with them before the Theurgy went on the run in 2381. Although the NX-class was designed primarily as a long range science vessel, the USS Discovery participated in several major actions against the Romulans, including the Battle of Cheron in 2160.

The Battle of Cheron ripped a hole in time and space sending the Discovery over two centuries into the future to the year 2372. The damaged and time displaced ship was rescued by the USS Imperator, where she met a Lieutenant Jien Ives who was serving in the post of Assistant Counsellor. The survivors recovered from the Discovery had to cope with knowing that everyone they ever knew was gone. For Maya, she discovered that Vulcan was now part of a United Federation of Planets that promoted the freedom to pursue any lifestyle she wanted. She could never go back, ever. It was the first time that anyone had seen her smile.

That year relations with the Dominion broke down entirely. Starfleet was going to needed doctors, and soon. Maya enrolled in Starfleet Medical Academy in exchange for serving in Starfleet. By the time she graduated the war was over. In the meantime she stayed in Starfleet for a chance to see the galaxy, meet new people and make friends. In other words: Start over and put her life back together.

Her cadet cruise was aboard the USS Galaxy and she stayed on as the ship’s neurologist before being transferred to the USS Theurgy in October of 2380.

Fugitive aboard the Theurgy

Remembering the treachery of the Vulcan High Command in the 2150’s, she had no difficulty accepting the truth about Starfleet from Captain Ives, who she had met back in 2372. During the Niga Incident a misdiagnosis caused Maya to get infected rather quickly and she was no use against the parasitic pollen affecting the crew. While the ship was at Nimbus III the Vulcan doctor attempted to make herself morale officer, but her choice of activities were so sedate that no one showed up to them. During the Ishtar Incident, Maya was affected by the entity but did not accompany the bridge officers to the entity’s true universe.

During the mutiny aboard the Theurgy Maya was instrumental in defending main sickbay from the mutineers and afterwards used her telepathic abilities to counteract T'Rena’s mental tampering and restore crewmembers to normal. Afterwards she participated in a search and rescue mission aboard the Theurgy’s yacht, the USS Alliegant and recovered shipwrecked survivors from the USS Harbinger.

Unbeknownst to Maya, she inadvertently gave Doctor Nicander the ability to place her under a hypotonic trance, allowing him to command her every move should it further his plans. While under his influence, she freed the possessed prisoner Sonja Acreth during the Battle of Starbase 84 and awoke from her trance to find herself a prisoner in the same brig.

When Doctor Nicander was exposed as one of the Infested, Maya was released and temporarily returned to active duty. The arrival of Counselor Hathev resulted in a thorough examination of Maya’s psyche and the revelation that she didn't fit within Vulcan norms. After two weeks of immersion in a simulation of a Vulcan monastery in a holodeck, Maya was asked by Captain Jien Ives if she was willing to volunteer to join the Klingon fleet and assist their officers in identifying the Infested, since so far only the Medical Department of the Theurgy had made any serious study to do so up to that point in time. Maya accepted and left the Theurgy to continue her trek through the stars with an alien species, very much the way her time in the 24th century had started.

Maya sees herself as a rebel, but to her 24th century counterparts there’s no one more tame and conservative. Unlike most Vulcans Maya exudes a warmth and empathy that humans find appealing, if a bit forced. She is a good listener and she makes an effort to fit in with the humans around her. Despite her skill as a physician and her powerful mental abilities, Maya has a poor self-image and is susceptible to suggestion. She will often agree to a commitment or proposal just to avoid conflict. She is shy and retiring, but willing to participate in human social interactions given encouragement. Although she does not display excitement, she attempts to display compassion and sympathy. While serving aboard the Theurgy, she’s suggested making herself morale officer in part so she wouldn’t be left out of the crew’s festivities, indicating that Maya is lonely among these strange aliens. She considers herself a hedonist, but is so sedate and unimaginative that most people think she was raised in a nunnery.

Maya can be trusting to the point of gullibility. Despite her empathic abilities, she tends to give everyone she meets the benefit of the doubt. This can be an asset when making first contact or trying to gain someone’s trust but a liability if she meets someone nefarious. The exception comes when someone exhibits behavior that identifies them as a patient. Then she becomes just as critical and discerning as any other Vulcan.

Anyone with a strong will and leadership capabilities can seduce her if they know what they’re doing. She’s a pushover. As a doctor she is drawn to broken people. Anyone whose libido is out of control will get her attention because it resembles Ponn Farr and she instinctively thinks she has to save his/her life, but she doesn’t look forward to those cases, it’s more of a duty thing. Off duty she avoids anyone whose emotions/mind she can’t read, they remind her too much of Vulcans who learn how to shield their minds early on so they can shake hands without revealing their life stories. If she wanted to talk to the walking dead, she would have stayed on Vulcan. Despite being open for relationships she isn’t in one because she never initiates courting and almost no one flirts with Vulcans. 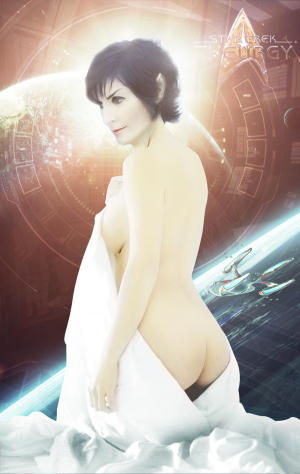 Doctor Maya is a slim petite Vulcan female of indeterminate age. She has allowed the rather severe haircut favored by most of her people to grow out a bit and now her pageboy haircut had grown enough to hide the pointed tips of her ears. She has large hands and long dexterous fingers that are often more expressive than her long face. Her skin is so pale that it sometime acquires a greenish tint when she’s flushed. When someone speaks to her, she will often open her large hazel eyes wide, believing that it will give the impression that she’s giving the speaker her complete attention, but in reality makes it look like she’s always surprised. Her face has the high cheekbones and arched eyebrows that Vulcans are known for, but she has allowed her bangs to grow to conceal the tops of her slanted eyebrows. She speaks with a soft mezzosoprano voice that is always calm. When in a conversation with others, her default facial expression is a polite smile, but it comes off somewhat artificial. If her clothing is removed, one can see that her nipples are a dark moss green.

Maya has studied Shennung, a rare form of Vulcan neuropressure employed by touch telepaths that has truly remarkable applications. No needles necessary: By touching specific nerve clusters and concentrating Maya can diagnose and even treat many ailments. For example, she doesn’t need a defibrillator to restart a heart or breathe into someone’s mouth to give CPR. By using the patient’s own nervous system to control bodily functions, she can speed up natural healing or muster a body’s defenses drug free. For example, Carrigan Trent’s physical therapy would have only taken days to weeks instead of months to years as Maya reprogrammed his nervous system to run his artificial limbs. This differs from the standard neuropressure technique practiced on Vulcan and can only be employed by powerful telepaths with thorough medical knowledge.

Although she is a pacifist, she has studied Shunanju, an unarmed martial art focusing on pressure points that includes the nerve pinch technique in order to subdue delirious patients. She seldom uses this effectively since she lacks initiative unless someone is going to injure themselves. If someone tells her to incapacitate an opponent, she will do so with a minimum of force or movement. If she is sexually assaulted her sexual facilitator training kicks in. On Vulcan she made a living out of being raped. During Ponn Farr, the out of control male is the victim not the perpetrator. (Small wonder why Maya left home and never looked back.) If she’s attacked by a rapist she will lie back and take it, or actually use her knowledge of the humanoid nervous system to make the experience more pleasurable for her attacker!