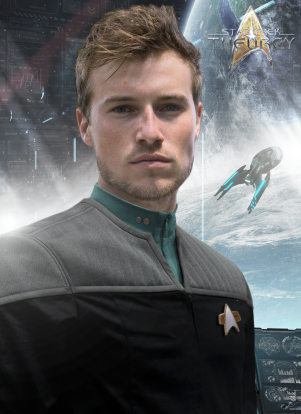 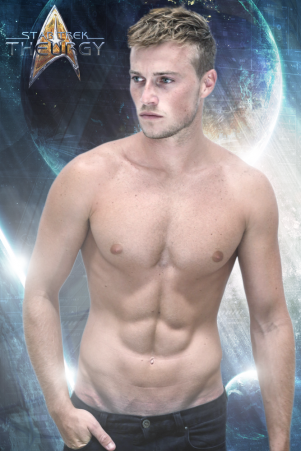 Lieutenant Rhys Williams, was Chief Counselor aboard the USS Cayuga. After the ship was left adrift in the Azure Nebula after a battle with the Borg, Rhys did his best to try to look out for the crew’s mental health. He also did his best to help the Captain and the crew in anyway he could. As of March 2381, he served on the USS Theurgy, aiding in the opposition against the parasites that compromised Starfleet Command in the end of the 24th century.

Rhys was born in 2355, on the small island of Anglesey just off the coast of Wales. Rhys was a bright if quiet boy, who delighted in growing up amongst the rivers, mountains and valleys of his native land. He had a fascination for myths, legends and history and was fond of reading books on those subjects. He also had a great love for swimming and practically anything involving the water.

His mother Anna, was Chief Engineer of the USS Lichfield, and his father Jack was a Doctor. Rhys adored his mother, but his relationship with his father was uncomfortable as even as a child Rhys and his father struggled to get along. At school, he did very well academically, and while he was not the most sociable person, he took a great interest in observing other people. He also did okay at sports especially at swimming, winning awards in competitions.

Rhys’ life dramatically changed when his mother died during the Battle of Wolf 359 in 2367. Before she had left the two of them had argued and Rhys believed himself in some way responsible. Even though he knew such thoughts were irrational he found it hard to shake off the belief that a negative stray thought could kill people close to him. This led to increasingly ritualistic behaviour to stave off these thoughts. For example coming to believe possessions had to be ordered or set out in a certain way to stave off harm coming to those from stray thoughts.

This also led throughout his teen years to difficult interpersonal relationships. As not everyone understood his compulsive behaviour, and even when they Rhys was reluctant to form attachments to others in case he harmed them in some way. His relationship with his father deteriorated further bordering at times on the abusive.

When he was old enough, Rhys applied to Starfleet Academy in the hopes of one day becoming an Engineer like his mother had been. Rhys learned his lessons well, applying them in a practical situation was a different manner. Rhys was never satisfied with his work or the work of those around him. He would continually go over work again and again trying to get it perfect, long past the point where any meaningful changes could be made. Other cadets dreaded working with him.

During his time at Starfleet Academy, Rhys discovered he was not completely straight. He discovered when he began to develop an attraction to a fellow cadet, a fellow human named Anthony Luca. Rhys found, it hard as it was to pursue women, let along other men. He was quiet, reserved and intimidated by those he was attracted to. On one occasion Rhys, his hands shaking and sweating did attempt to flirt with Anthony, but his advances were rebuffed. Rhys was not a popular or well thought of cadet. His quiet, reserved nature was often confused with arrogance and aloofness. Since then Rhys has been reluctant to explore this side of himself.

After his early promotion to Ensign, Rhys elected to stay on the ship he'd taken his cadet cruise on, and remained assigned to the USS Mercia. Within the first month, the ship suffered a catastrophic warp core malfunction, leading to the destruction of the ship and the loss of many lives. Rhys and several others managed to escape the destruction of the ship. Rhys suffered a nervous breakdown and was sent for counselling back at Starfleet Academy.

Rhys was put under the care of counselor Karla Fischer. He was enraptured by how she dealt with not only his problems but the problems of his fellow cadets who had survived the Mercia incident physically if not mentally. Under her care, his symptoms began to improve and he became determined to switch specialities at the Academy and help other people the way he had been helped. Much to his surprise he found it was something he was remarkably good at. He spent a further three years at the Academy studying Psychology, and finally graduated.

Rhys was promoted to Lieutenant JG and assigned to the USS Cayuga to work as Assistant Chief Counsellor to an old colleague of Karla Fischer’s. Vamte Nayr, was the Bajoran Chief Counsellor an eccentric man but a man who understood people remarkably well. Rhys felt he learnt more under him than his entire time at the Academy. Rhys spent the next two years assisting where he could under the careful watch of Nayr. Rhys found that working to help solve other people’s problems helped him with his own. Also many of his patients responded well to him knowing that he had experiences he could compare with theirs.

In 2380, Nayr was forced to retire early through ill health. Rhys was as surprised as anyone when Nayr recommended that Rhys be promoted to be his replacement. Rhys was granted the rank of Lieutenant, and became the Cayuga’s Chief Counselor. Rhys never entirely felt like he deserved any recognition he got, but instead of dwelling on it as he had done in the past he worked hard to be worthy of the place he had been put in.

In February of 2381, the Cayuga was attacked by a Borg cube, inside the Azure Nebula. This was Rhys’ worst nightmare, literally in some ways. He still was plagued by nightmares about his mother’s death. He had to once again contend with the delusion that he had somehow called the Borg down upon them.

The ship was left adrift, after a long and arduous battle. Everyone on board who could had had to contribute in some way. Rhys realised he would have to get beyond his fears to help, never an easy task. He had never thought he would have to use his engineering lessons from the Academy much again, had helped where he could however he could. The Captain had broadcast a message, but many of the crew felt there was little hope of it piercing through the nebula. Rhys was now left with the unenviable task of trying to keep a downtrodden crew’s spirits up.

In public Rhys did his best to maintain calm and relaxed demeanour. It was important as possible to be approachable as possible so people with problems would find it easy to come talk to him. Rhys was also very taciturn, rarely opening his mouth unless he had something important to say. It made him a good listener and observer of other people.

One of the things that counted against Rhys in terms of his superior’s view of him was his complete lack of ambition. He loved helping people, but was not the sort of person who pushed for promotions. He was pretty content with his place in the hierarchy.

In private, Rhys was very insecure, self critical, prone to depressions and feelings of guilt. He still found himself often, rewriting reports over and over and over again, even though they were likely fine the first time. He tended towards overwork, and also expected impossibly high standards from any of the people working below him. He also had a tendency to be uncomfortable in the presence of Betazoids and other telepaths or empaths, as he did not like people seeing beyond his facade of calm.

Rhys suffered from Obsessive Compulsive Disorder, and to a lesser extent Obsessive Compulsive Personality Disorder, which he worked hard to work through as best he could. He found it often gave him a useful insight into others. It also meant people felt more able to come to them with their problems as he could more easily understand them, than perhaps others could.

Rhys always used to take his shore leave back home on earth in his native Wales if he could, swimming and walking the land of his childhood. While on downtime aboard ship, he would read books on history and fictional works. He also enjoyed making models of starships it had been an activity he had done with his mother when he was a child and it helped him feel close to her. He was also fond of other languages and while not naturally skilled at learning them enjoyed attempting to learn them.

Rhys was fit due to his swimming habits and would exercise regularly in other ways. It gave him a lean but well muscled appearance. He tended to prefer to get up his fitness through solo activities and was reluctant to participate in sports especially team sports. This was more due to shyness than to a dislike of sport.

Rhys was also relatively boyish in the appearance of his face, often looking slightly younger than he really was. He tended to keep his hair cut short, but when on leave would sometimes grow it out a bit, though he would never let it get too long.