Unfortunately, she was KIA in April of 2381.

In 2354, Zelosa was born as the third of seven children to Notav and Kasian Ejek. They lived in the suburban area of the Cardassian city Berat, where their flat became increasingly small with their growing number of offspring. Zelosa's infancy proceeded in conformity with Cardassian culture. She started mental training at the age of 3 ½ and learned to view all alien life as a threat to the state that protects and nurtures the Cardassian people.

Disaster began to strike when in 2365 Zelosa's younger brother Silar died at the age of eight. Belonging to the less influential and wealthy, the Ejek family suffered from food shortages as an indirect result of Cardassian war losses. Her youngest sister died shortly after. As a consequence, her two elder brothers joined the military in hopes to secure privileges for their family. It paid off when they were invited to resettle into a bigger flat in Cardassia City, but Zelosa lost both of her elder brothers – and, with the Battle of Cardassia, eventually the rest of her elementary family - in the Klingon-Cardassian war and the Dominion War of the following decade.

The Dominion's occupation with Breen and Jem'Hadar ground forces marked the first time Zelosa witnessed a permanent presence of alien life. She experienced it as hostile and threatening and reacted with silent deprecation.

She was 21 years old and in her 5th year working for a subsection of the Cardassian Bureau of Identification when the Jem'Hadar's mass slaughter of her people surprised her. She fled into the bureau's warehouse and hid in a storage locker, surviving the attack thanks to more luck than judgment as the war ended before she was detected (although, of course, Cardassians don't believe in luck). An away team of the USS Covenant, one of several ships sent by the Federation to aid Cardassian search and rescue missions, found her two days later, still in the storage locker she refused to leave, in a state of shock. They beamed her aboard the Federation vessel where she was supposed to be treated.

Basically abducted by aliens, Zelosa was uncooperative. She refused to talk to the counselors, or anyone who tried, but showed signs of trauma too severe for the Federation personnel to send her back onto the devastated Cardassian ground, where she would have been on her own. Her defiance left them clueless for days.

Eventually, Commander Kelar, the Trill Chief Counselor of the USS Covenant, supplied her with specialized literature on psychology, aiming for transparency and establishing trust: a strategy that worked out. Zelosa showed more readiness to give written content a try, both curious to find out what “results” she was supposed to show (and if she could fake them), and whether or not the Federation fed her compromised information by planning to compare the data to what she hoped to later research on Cardassia.

As expected, she would find the data compromised. However, by the time she got the chance to check it, she contributed it to the cultural difference with which their both societies would treat that knowledge, as she believed the Federation had acted in accordance with their values (and thus not falsified information).

Seeing that Zelosa's mental situation had improved, and at least in parts attributing it to the knowledge she was given and their subsequent conversations about it, Commander Kelar asked her for insights into the Cardassian mental training and thought structure. She hoped to improve the Federation's very sketchy medical data on Cardassians, and to so develop better ways to help the suffering survivors. Zelosa refused, telling her in no uncertain terms that she was not willing to do her “dirty work”, and referring her to the Cardassian Ministry of Science, where she would or would not find her answers, depending on whether or not the Cardassian state found them appropriate. To her big surprise, the Trill was still ready to write her letter of recommendation to Starfleet Academy when it came up a few days later.

Having grown up in a militaristically dominated society, Zelosa had little problems with the discipline and focus expected of her in Starfleet. She passed the entrance exam on Earth in 2376. From now on she preferred to go exclusively by her family name, Ejek, as is usual in the Cardassian military and as feels natural to her amongst aliens.

She didn't expect much enthusiasm or affection from her peers at the Academy. Despite facing a few delicate situations, she was therefore positively surprised by being generally accepted, although far from being well-liked.

Ejek missed the practical relevance of what she did during her time of learning, and she considered herself needing a lot of getting used to on a Federation starship (the climate, the language, the technology, the brightness, the architecture etc.). At the same time she realized that her organized mind and memorizing strategies gave her a slight advantage over most of her peers. Therefore, she signed up for field training as Cadet 3rd Class, and was assigned to the USS Resolve. A mission from which she would not return in time to continue her training at the Academy.

Instead, she got field-promoted to Ensign about seven months after joining the Resolve’s journey. It happened to honor her capability and level-headedness under stress, but also to relieve her superiors of the annoying duty to double-check her work and to give her elaborated access and console privileges. Ejek received her second promotion during the third year of being missing, together with the position as acting chief of the counseling department, to step up and fill the void her deceased superior had left.

After the Battle of Starbase 84, she became the Assistant Chief Counselor on the USS Theurgy. 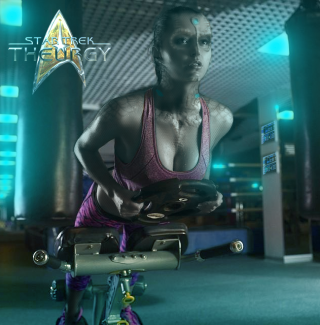 Ejek is an energetic, autonomous woman. As far back as her early childhood days she always found ways to withdraw into solitude, either of her own mind or hiding places, to tend to her own needs and find the distance necessary to show an interest in others when amongst them.

Her age does not particularly bother her, but being under 30 has her acknowledging that she is young and unexperienced. A defiancy Ejek seeks to compensate by applying theoretical knowledge and ideas.

She has an active approach towards problems and can get flustered when frustrated. Aggression comes to her more naturally than panic when threatened or over challenged, as it stirs her desire to regain control over her life. This usually means she tenses up, gets overly focused and can get hasty, but only if completely carried away by the emotion.

Even though sociable, as most Cardassians are, Ejek tends to be skeptical and has a dry, if not cynical sense of humor.

Death or hardship are viewed as parts of the natural course of life. Due to and in line with the Cardassian ideology of the never ending sacrifice, she does not consider self-realization or happiness as a basic Cardassian right. In fact, she took it for granted that she was on her own after the Battle of Cardassia, and a stranger investing as much energy and time into her as only a family member might have, touches and fascinates her far more than she cares to admit. Although she doesn't feel indebted to Commander Kelar, Ejek suspects this fascination as part of her subconscious reason to join Starfleet. While her rational reasons are more down-home, ranging from it being an opportunity presenting itself to the fact that she wouldn't burden the Cardassian society with being another mouth to feed.

As Ejek is used to the philosophy that the ends justify the means, she sometimes still struggles with the Federation's values and moral code. To blend in as best as possible, and to live up to her duties as a Starfleet officer, she therefore thinks through all her possibilities and then puts them through a mental filter of what is potentially amoral when deciding what to do. Sometimes, she doesn't do that quietly.

Like most Cardassians, Ejek enjoys the heat and dimly lit rooms. She can survive higher temperatures than many humanoid species, but has a low tolerance for cold climate and bright lights.