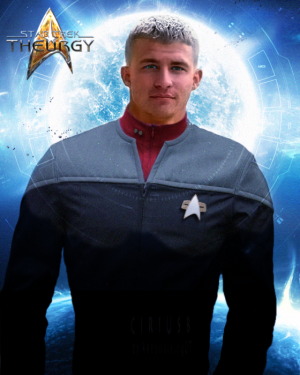 Starfleet ranks were the identifying titles for the officers and enlisted members of Starfleet, under both United Earth and the United Federation of Planets. These ranks used the titles and positions adopted from earlier Earth naval forces. Aside from rank, all officers also held a position in a department, which could be said to be his or her 'job'. Example: A Lieutenant's position was not to be a Lieutenant on a starship. The Lieutenant's position on a ship could Security Officer, which was a role that had certain duties attached to it.

Starfleet uniforms were mainly worn with colors denoting in what field a particular officer or crewman specialized.

Within Starfleet, there existed four divisions of personnel, which handled all possible allotted tasks.

Red indicated Command, Tactical and CONN. These were commanders, like COs and XOs, or administrative personnel, yeomen. They were also CONN and Flight Control officers. Tactical Officers also wore this colour, with the Chief Tactical Officer posted on the Bridge.

White indicated Tactical CONN. This was where the Starfleet Fighter Pilots and Officers belonged; in the newly formed Aerospace Command division where space aviation and military/tactical knowledge went hand in hand. The Tactical CONN department worked very closely with both the CONN and Tactical departments.

Gold indicated Engineering, Operations and Security. These were those who built, configured, alloted, and repaired ship's systems. Security handled security on board, ranging from crowd control, the Brig and a number of related issues.

Teal indicated Science, Medical and Counseling. These were the nurses, doctors, pharmacists, and orderlies of the Sickbay. They also analyse scientific data, and preform experiments.

Starfleet uniforms were uniforms worn by individuals serving in the Federation Starfleet, originally a United Earth organization. These uniforms facilitated the wearers' needs as both scientists and researchers, as well as Starfleet's military role. Wearers were expected to abide by the Starfleet dress code, though special exceptions were sometimes made for certain aspects of an individual's cultural heritage, such as Worf's Klingon baldric and Nog's Ferengi headdress as well as Ro Laren's (and briefly Kira Nerys') earrings. Source: Memory Alpha

These were the Starfleet Uniforms as of 2381 in Starfleet. Like all ships, the USS Theurgy had a specific dress code for on-duty officers. The standard duty uniform was a three piece ensemble consisting of pants, colored undershirt (department specific color), and jacket. An optional skirt was permitted for female crew if they wished. 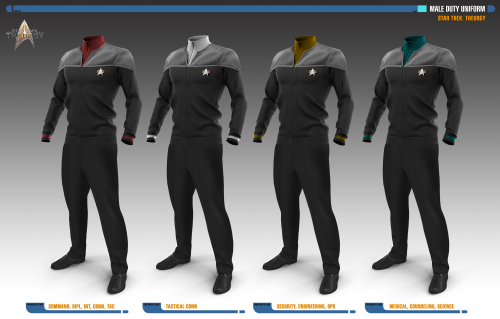 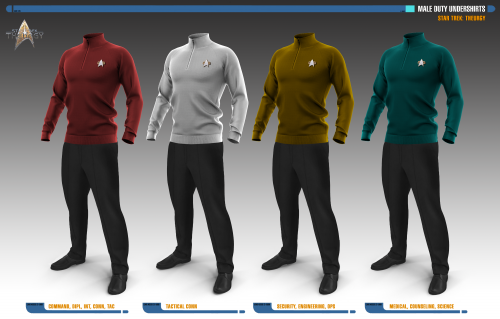 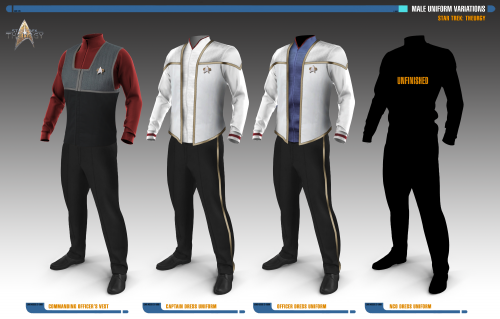 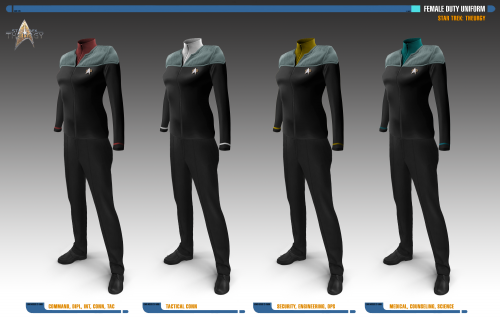 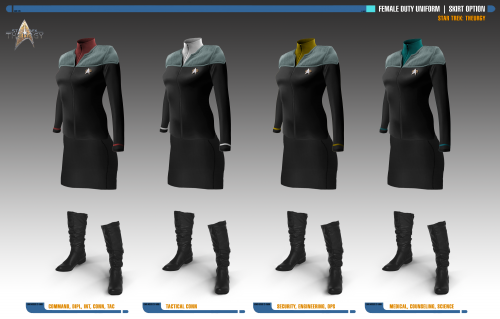 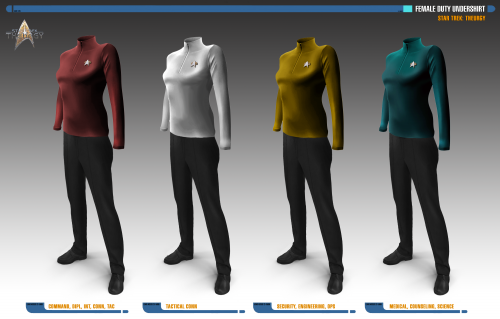 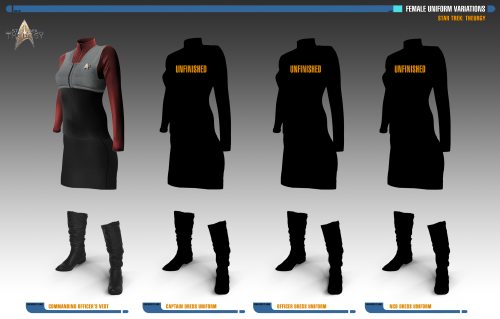 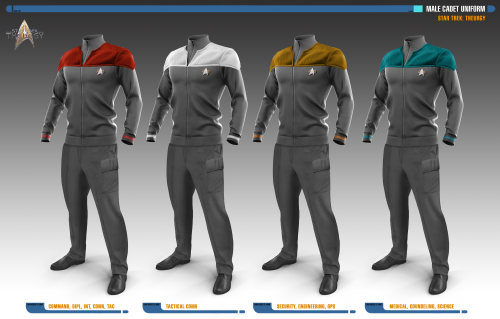 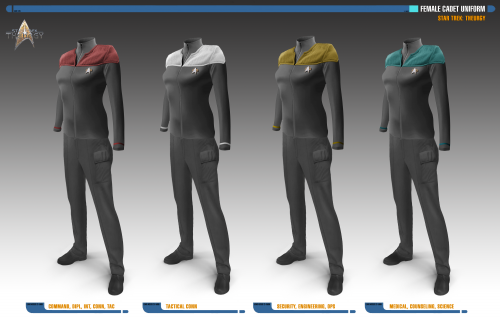 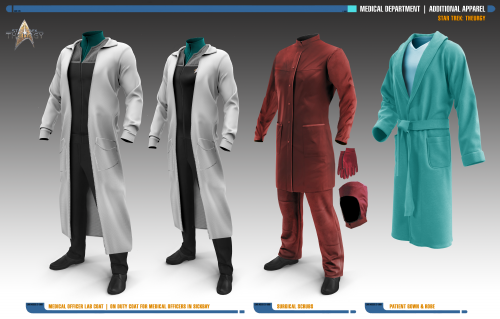 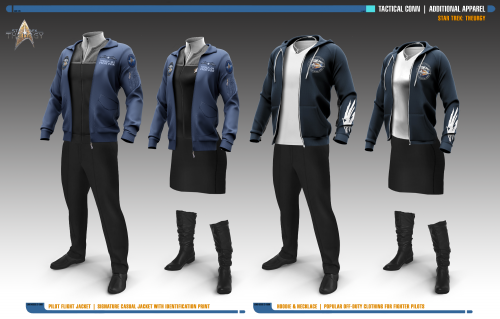 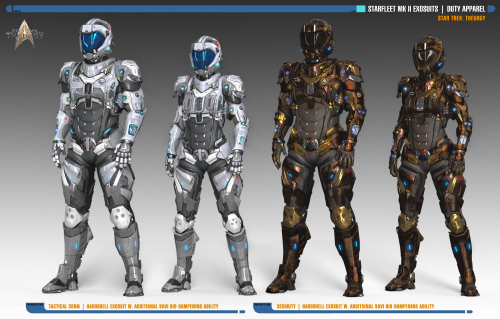 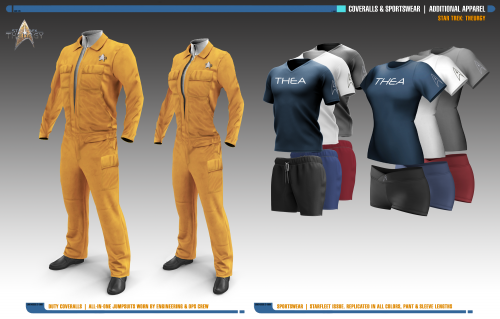 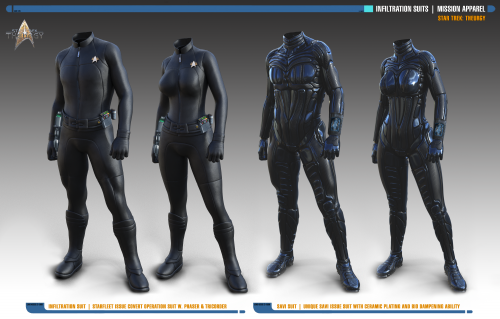 Ranks in Starfleet followed a specific order, broken up into four, in this descending rank:

Enlisted crewmen were not trained in any command fields, and fulfilled the mundane duties of a starship or starbase. Officers were trained for command, and it was assumed that some would someday reach the ranks of captain or above. Flag officers often fulfilled administrative duties, and sometimes commanded task forces of ships. Promotions were awarded for quality of service, not for length of time served.

Provisional Officers, the exception of the four above, earned a field promotion aboard a ship or a starbase, and could even hold Line Officer rank.

A Flag Officer was both a historic naval and military rank and a modern Starfleet title. It generally referred to all officers of Commodore rank or higher. The term traditionally denoted any officer that commanded a squadron of vessels, possibly in addition to one under their direct command.

A commissioned Line Officer was an individual who had attended, and graduated from the cadet program of Starfleet Academy or had been commissioned through the Officer Candidate School after having attained their education in their field elsewhere. Those graduating from Starfleet Academy earned a four-year degree (Bachelor's) in their major field of study such as communications, engineering, the sciences, or nursing. After four years at the Academy, they either passed or failed. If passing, the person would be promoted to Ensign. Officers doing exceptionally would be promoted directly to Lieutenant Junior Grade.

Medical officers attended an additional four years at Starfleet Medical Academy before earning their medical degree (or earned their commission through Officer Candidate School after having obtained their degree elsewhere).

Cadet was a rank which was used at Starfleet Academy to denote students in training to become Starfleet officers. Becoming a Starfleet cadet was a difficult process and required a significant amount of academic achievement while in high school. Academy entrance standards were particularly high, especially in scientific and math disciplines (such as calculus). Cadets were also expected to maintain a satisfactory grade point average during their attendance at the Academy. Getting bad grades was grounds for a cadet's revocation of appointment from the Academy, also known as "washing out". Starfleet cadets were under the same uniform code of justice as Starfleet officers and were in turn subordinate to the orders of superiors. They were also required to report violations of Federation law they observed to their superiors. Cadets were also expected to show military courtesy and respect to senior commanders.

Even though Warrant Officers were considered Commissioned Officers, they are drawn from the ranks of NCO personnel. The Warrant Officer, and the ranks that follow it, were a special form of Commissioned Officers bridging the gap between Enlisted personnel and Line Officers. Only Chief, Senior Chief, or Master Chief Petty Officers could apply to the Warrant Officer ranks. A warrant officer had rank over all Enlisted personnel, and frequently took charge of large divisions or departments of these crewmen. Regular commissioned officers, such as an Ensign, held rank over a Warrant Officer. SCPO or higher was able to advance directly to WO (skipping other ranks) provided they attended Officer Candidate School. Warrant Officers were specialists in sub-departments of a starship, such as Transporter Technicians and Holo-technicians.

Most of a starship's or starbase's staff consisted of enlisted personnel. These people carried out the day-to-day operations and maintenance that allowred Starfleet to function. Enlisted stayed in Starfleet Boot Camp for six months as a Crewman Recruit, learning the ropes in a more simple way than Commissioned Officers, with a course emphasis relevant to your division. So, Enlisted were those who had not completed the four-year Starfleet Academy course or otherwise been given a commission as an officer. In most cases, Enlisted crewmen signed up directly to a ship or posting, and received basic training, as well as any specific courses required for their position.

In difficult times, it had been found a necessity to grant civilians - or crew members of other militaries - ranks that would otherwise be considered official within Starfleet. These ranks could be placed upon those that allied to Starfleet in some form or manner for whatever reason that the Commanding Officer of the ship found adequate. Provisional Officers had special rank insignia that differed from the normal pips that a Starfleet Officer would wear in his collar (Example: The rank insignia the former Marquis officers wore in Star Trek: Voyager).

The chain of command was a ranking system used by militaries and other organized groups. It represented the line of authority down which orders are passed from one officer to another, and also the line down which passed command of a particular vessel or installation.

Aboard a starship, or most starbases the chain of command began with the assigned commanding officer, usually an officer of the rank of captain, or in some cases commander. If the commanding officer, for any reason, was unavailable to command his or her post then those responsibilities passed down the "chain" to the first officer, then the second officer, etc. After the first officer (also Executive Officer or XO), command responsibilities passed down the chain from officer to officer as necessary in accordance with each officer's rank. And it was common practice for a commanding officer to designate a second officer to take command if both the captain and first officer were unavailable or unable to perform their duties. 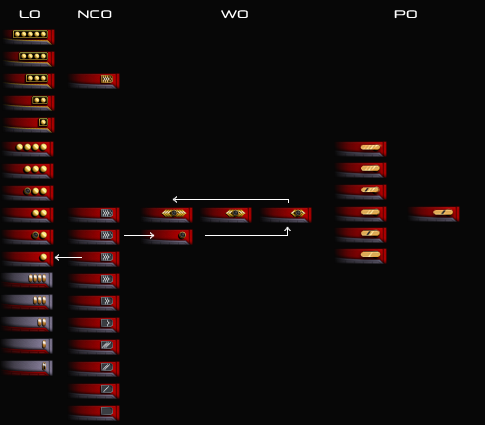 Rank also determined which kind of quarters Starfleet officers lived in aboard a starship. Below are the different quarters on the USS Theurgy.

Uniform text portions of this page is used with permission of USS Wolff CO - granted Nov 1, 2016