Silim Parnak was a Cardassian exobiologist, undertaking research on Starbase 84 in the late 24th Century

Silim Parnak was born to Armal and Gila Parnak in Culat on 2332. Silim’s childhood could be described as average. He grew, like most boys, idolising his father and the tenants of Cardassian culture - strength, wisdom, power, family, and above all, service to the state. At the age of 16 he left to follow in his father’s footsteps and joined the Culat Regional Military Academy.

Graduating in 2350, Parnak saw seventeen years of active wartime service before the 2367 truce of the Federation-Cardassian war. Whilst Silim served in the Eighth Order and awarded the rank of Glinn, Parnak did not settle to non-wartime active military life, his thoughts upon the enemy and others who lived outside the reign of Cardassia. Upon the Formal treaty signing of 2370 Cardassian military personnel were given the opportunity to not renew their terms of service and retire, assuming they had given at least 20 years to the order; Silim took this chance. With a coerced recommendation for study in the sciences from his commanding officer and the remainder of his now deceased father’s influence, Parnak was granted entry onto a degree within the xenobiology department at Central University on Cardassia Prime.

Academic life was not easy with most classmates being much younger and of the opposite gender; Silim struggled to leave his mark beside novelty. It was only when Parnak released his dissertation did he start to become credible. "Incorporation of multiple sequential pseudothymidines by DNA polymerases and their impact on DNA duplex structure" was a hit within the Cardassian medical science community and allowed him to court the ability to undertake a doctorate at the university of his home city, the University of Culat, away from the hustle and bustle of the dominion occupied Cardassia City. Upon completion, Silim took to a life of research, happier than within the military and able to care for his elderly mother, who passed in 2379.

Silim now sits upon the board of exobiology at the Cardassian Science Ministry as a respected academic and researcher at the University of Culat. For the last seven months, Parnak has been undertaking joint research with Simon Walt and the Federation on the Carrayan Solus Bat, a positively phototactic chiroptera found on Carraya II. The proposal was part of a package received by the Cardassian Science Ministry from Starfleet Science suggesting a new venture of joint research on a number of different projects. Even though Silim was one of the first, there are now Cardassian Scientists working on specialist projects across the Federation and Federation Scientists likewise within the Union.

During his time in the Federation, Silim has, like others, followed the current news of defection of Theurgy and Harbinger; Initially trying to pay it little mind, it was too delectable to completely ignore. An embarrassment to Starfleet and the Federation of this magnitude was always appealing, no matter the poor choice in which governing body they had fled to. The most interesting part of the story for Parnak was news on the captain itself; a Chameloid capable of reassigning it’s gender at will, Parnak often pondered if it is gelatinous, such as Changelings, or musculoskeletal with the ability to shift densities accordingly. He hadn't the chance to study Changelings during the alliance and subsequent occupation of Cardassia by the Dominion; If the opportunity presented itself with Ives, he wouldn't refuse. 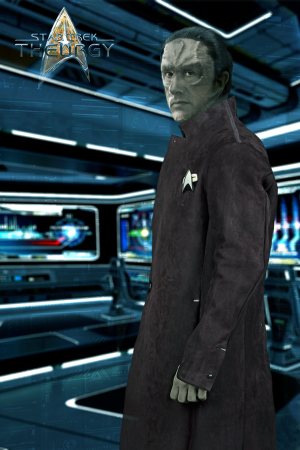 Silim Parnak considers himself a middle aged Cardassian of means and enjoys the lifestyle according to his status. Like most Cardassians, Silim is generally suspicious and regards those who are not as foolish; That is to say he does not tolerate them, but embraces those he considers to be lesser more as subjects of interest for research rather than friendship.

Although reasonably prominent in the field, a history of teasing and bullying from female colleagues about his place in the sciences has left Silim irascible on the topic.

His eidetic memory, a by-product of a state school education on Cardassia Prime, allows him to enjoy a variety of hobbies, including murder mystery novels although human standards are not up to level of complexity in Cardassian literature.

The lack of family weighs heavily upon Silim and is, as such, a sensitive topic.

Silim, like most Cardassians, is tall and slim with slicked black hair. At his age, the hair is started to show signs of greying and whilst Silim takes effort to hide this, he will let it show occasionally.

As he is no longer in the Military, his body has reverted to that of an academic and will work out as necessary to maintain weight but no further. His primary choice of exercise is swimming in hot pools and springs, allowing him the pleasure of post-swim lounging on hot rocks.

Silim still has his military uniform from his service, but does not wear it, instead relying solely on civilian garb and a subscription to fashion magazines to keep him apprised of latest styles.