The craft known as The Apache began its life as a generic Hawk-class runabout utilised by the Reman underground. Part freighter, part troop transport and part gunship, the Hawks were designed with utility and serviceability in mind to allow the Remans to accomplish their goals as easily as possible. It was these attributes that combined to allow the Reman siblings, Lorad and Samala to escape from Bacury III when the Romulans attacked. Renaming their ship, The Apache and removing all traces of its history and origins, the two set out for Klingon space. Traversing the Azure Nebula, an accident occurred when the ship detonated a Sirillium gas pocket, damaging the craft and injuring its crew. It was only the timely intervention of the nearby Helmet vector of the USS Theurgy that both the ship and its occupants were rescued.

“The Hawks were our survival knives when we had nothing else. Built to work, they were the jack-of-all-trades when we needed them. The Apache more so than most.”
Samala describing the Apache to Sinead O’Riley 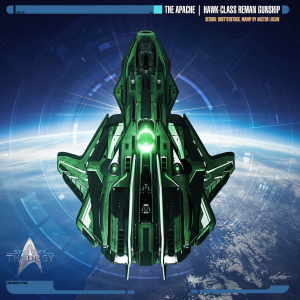 The design that would become the Hawk-class Reman Runabout first came into existence when Reman sympathisers within the Tal Shiar obtained the stolen plans for the Federation Danube-class runabout. Forwarding these plans to the resistance, it was decided that though the basic nature and shape of the craft were sufficient, the design could be improved upon to specifications better suited to the craft’s intended usage by the Remans.

The craft’s light Duranium/Tritanium hull was reinforced to better handle the rigours of combat that the Remans expected them to encounter. The hull was also darkened in colour to aid in concealing the ship during night-time attacks when the cloak was not in use. The ship’s paired shield projectors were mounted directly above embedded nacelles along for a strong flow of power to them.

The cloak itself was of the Reman variety that was considered ‘perfect’, with the projector mounted dorsally along the midline of the craft. Although the Hawks lacked the power generation capacity from their warp core to be able to run the cloak and weapon’s systems simultaneously. However, upgrades to the core beyond the Danube’s original design specs did allow for increased shield strength along with faster impulse and warp speed capabilities.

For its intended role as a gunship, the Hawks were provided with a heavy, almost obscene, armament for a craft their size. A pair of Type-3 Disruptor Cannons were mounted in the hull to either side of the cockpit and drew their power directly from the gunship’s warp core. Though only able to fire directly forward, the firepower these weapons provided, as either beams or pulses, had caught many a foe by surprise. The cannons were supplemented by a trio of Type-3 Disruptor Arrays, 2 forward and 1 aft, that provided a more encompassing level of protection but were weaker than the cannons. Finally, 6 Micro Torpedo Launchers, with 15 torpedoes in each launcher's magazine, added an explosive volley to al already high energy salvo. It was not uncommon for Hawk’s to carry additional torpedoes as cargo to facilitate reloads on loong duration missions.

The Hawk had a nominal crew of three; a pilot, a weapon’s officer and an engineer, with all three being cross-trained on each other's roles in case of injuries. The passenger compliment of a Hawk was 21 berths. This normally amounted to two squads of Reman Shock Troopers, each led by a Decanus, while a Tesserarius was in overall command. The two squads were bunked in alcoves in the side walls of the cargo bay while the Tesserarius had the last available cabin. Deployment of the Remans was handled either through the rear airlock and access ramp or via the 5-pad transporter. In the case of emergency, the Hawks came equipped with 21 casket-style escape pods mounted under the floor directly behind the bridge, and in front of each berthing area in the cargo hold, intended for use in only the direst circumstances.

Crew facilities were considered spartan at best with little provision for privacy beyond their assigned berth and the bathing areas being communal for all on board. The Shock Troopers weapons were secured in lockers mounted to the front wall of the cargo bay, hidden from view from the rear access ramp by structural reinforcements. Several deck plates near the ramp were hinged to provide defensible positions in case the rear of a Hawk came under attack while landed.

From an engineering point of view, the Hawk’s warp core was mounted above the cargo bay in a horizontal position while most of the craft’s core systems were accessible through maintenance hatches in the floor. The cargo bay itself measured 10m x 5m x 3m, providing 150 cubic metres of space for freight, supplies or whatever else the Hawk needed to carry.