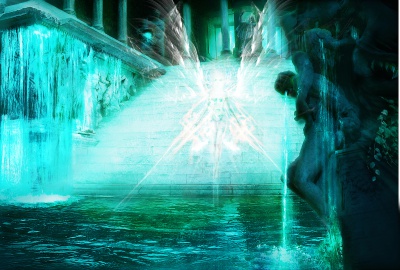 When the crew of the Theurgy was able to detect and transport the unknown entity that were playing with them to the Main Bridge, they faced Ishtar - an omipotent being that had come to feed on the energies aboard. At the end of the confrontation, the entity unleashed its power, and displaced the bridge crew from where - and when - they were, to another place entirely in space-time. To the dimension of her prison they came, to the Temple of Adzû.

Story Excerpt: Whatever Gods May Be

The moment had come, with the lock gained and the Transport in progress - the shimmer casting a dancing spectre upon the deck before the view screen. Anticipation held something dreadful for the moments to come, so when the figure materialised before them all, it was something of a relief to see a creature that held a humanoid form. It even had familiar attire.

For in front of them stood a blonde woman with a Starfleet uniform, her department colour being the teal of Counselling, Medical or Science. Her arms crossed, she looked upon the gathering with something akin to surprise upon her features. It was hard to tell, for what set her apart was the same thing that Jien had seen in the turbolift that morning; that light which shone from her eyes. 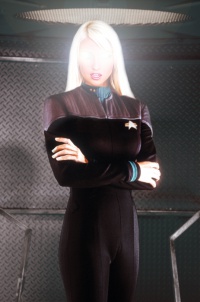 Image: The Ishtar Entity
She remained where she was, impassively, while the radiation of her stare wandered the room. She seemed not concerned at all, yet very intrigued as to how she had been forced to come to a place she had not chosen to visit. In fact, the idea of being subjected to the will of someone else seemed almost... new to her. Yet of fear... there was no sign. The Security personnel and the Tac Conn Officers might as well have been holding plastic toys in their hands for all that she appeared to care. Outnumbered and alone, the creature was still not concerned.

"Who are you," asked the male Jien Ives as he spoke up from his position before the Captain's Chair. His female counterpart stepped up to his side, her frown a mirror-image to his own.

The woman turned her eyes to him and smiled. "Whatever you prefer to call me, mortal," she said and tilted her head, "for I have thousands of names, several from your end of the Galaxy alone. On my part, I do not care what you deign to call me, for I know that names are fickle over the course of the centuries."

The female Captain spoke up in her crystal clear tones. "What are you called in the Sol System, then? Do you have names that spring from Earth?"

"Too many," she said and chuckled, beginning to saunter towards David Grayson where he stood, armed and ready to shoot her - the effect of such shot still unknown. "Ishtar might be one of my first pronounceable names in Terran history. Or Inanna? I fail to remember which came first. It makes no difference. You are the kind to misread and misspell and thus cast yourselves into war over a syllable or two. A curious sign of supplication, don't you think?"

After eyeing the Chief of Security a little too boldly, she turned to her audience with mockery in her tone - an imitation of religious idealists. "No, her name is not Freyja, nor Aphrodite or Venus! A plague on you for calling her Tlazolteotl!" She chuckled and shook her head, ambling towards the two Captains. "And a plague they suffered, ironically. Or was that the natives of that northern continent? I forget... So many people, so many planets. So many fleeting lives lost in Tiamat... sent down to sweet sister Ereshkigal... like mayflies into the darkest night."

The implications were too large to wrap one's head around. Especially for those present that called Earth their native home. Could there be any merit in such a claim; that the entity before them was mistaken as a god to the people of Terran history? Regardless if there was any truth to her words, another question seemed paramount to ask. The riddle yet answered.

"Why have you come here?" asked the male Captain with his browridge lowered over his eyes. "Why are you forcing us into games without meaning? What do you want?"

"I do not want to be disappointed," she said immediately, smiling serenely as she stepped up to the two Commanding Officers of the ship, "and since I came here, I have been so very disappointed in what I've found. Where are the games you played before I came along? Where did the will of and need of carnal pleasure vanish in such short time? I noticed you from the Abzû, where I bided my time in boredom, and like a supernova seen from afar, you called for my notice in this lowly and inferior dimension."

With her final word, her eyes flared into stark whiteness - the light swallowing everything in the Main Bridge. And with that light, like a concussion in the air, pleasure beset the gathered crew - impossible pleasure so sudden and strong it made people stagger and fall to the deck plates. Cries and sharp intakes of breath came from everywhere, a cacophony of surprise and ecstasy. It was felt all over the ship. Yet overriding all of the collective voices came the words from the entity named Ishtar.

"THIS IS WHAT I EXPECTED OF YOU," boomed the fractured voice of a being not properly contained in their current existence - making the white light shudder, "YET THIS GIVES ME NOTHING. FOR TO ME, THERE BE NO PLEASURE IN PLEASURE DEALT. ONLY WILFUL NEED AND CONSUMMATION IN EARNEST FEEDS ME - CALLS TO ME. MAKES ME WHOLE. MAKES ME TEAR MY WAY FREE OF MY CONFINES! I NEED YOU TO FEED ME!"

With ears ringing from the noise, and chaos and crippling pleasures tearing the situation apart, Jien Ives slowly found the noise, the light and the sensation in his body dissipating.

As the light receded, and he was able to straighten where he stood, he realised that they stood in ankle-deep water. The crew that had been on the bridge was not even aboard the USS Theurgy any more. No, they were somewhere entirely else, with no Starfleet-issued hull and titanium surrounding them.

They stood in a flooded temple, and before them... hovering by the base of stone steps, was... in lack of any other point of reference... an angel.

Wings of light moved slowly in the humid air, and the entity gazed upon the Starfleet Officers that she had invited to her prison - to this place where her true form resided. Both Captains stared wide-eyed, jaws clenched in preparation for whatever may come next. Residual euphoria lingered in their minds and bodies, yet the situation did not call for pleasure. It called for a need of control. They were completely at the mercy of this alien lifeform; an entity so powerful that whole planets all over the galaxy may just have named her a god. Not the first alien to invoke such theological consequences, yet the first alien of such nature that Jien Ives had faced.

The female form of the Captain looked behind her to check on her crew and make sure they were aright - standing in the water and the seizure abating from their bodies. Meanwhile, the male Captain spoke again - trying to push thoughts about his ship and the rest of his crew from his mind.

"Are you imprisoned? Here, in this place? Who did this to you?" he asked quietly over the noise of dripping water.

The voice that answered was otherworldly, spoken without vocal tract but rather as a whisper in the air - reaching everyone. "For your sake... for all the people residing in Tiamat... I seduced and stole... the blueprints of civilisation... For the theft of the Mes I pay the price... Anu and Enlil and Enki sealed my fate, with Lahamu and Lahmu guarding the gates above, and Ilabrat overseeing their vigilance... always watching, always knowing. Without worshippers, I am lost to this darkness. No power to break out of this Temple of Adzû. Without your supplication and carnal worship - without your celebration of your given bodies - I will remain here in this petty form of existence. Worship me wilfully. Celebrate."

Jien hesitated. Did she mean for them all to...?

"Celebrate, or I will send your puny vessel into the flames of a star," said the voice more evenly. Yet when it spoke anew, it was with a more gentle tone. "Forgive me, but if needed, I will remove your memories of what you have lost, so that you may learn to love each other here. Always. Feeding me with displays of your splendour and love. Until I can challenge my captors."

The cold blow of such words settled in them all.

"I suggest you find your desires to worship me now, for there is joy in carnal celebration. I should not need to make threats. I should not have to mar the pureness of your free will. Your worship can be unstained if you just take pity in my fate, and find compassion for me in your hearts. This is the easiest path for you. You must realise this."

The noise of dripping water seemed sharper as the dire situation became clearer - the silence screaming around them.

"Love me as your god... as you have in times immortal."

- Written by Auctor Lucan, Episode 02: Whatever Gods May Be