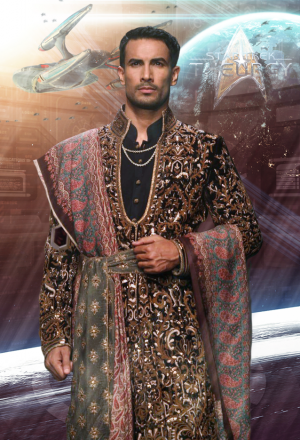 Image: Aldean male in 2381, wearing a chlamys and arm-mounted communicator.
The Aldeans were a civilization native to Aldea, which was considered only a legend for thousands of years.

The society was self-contained and self-sustaining with incredible technical sophistication providing daily needs. Similar to cultural myths of Neinman on Xerxes VII or the Earth story of Atlantis, Aldea was said to have shed its past of violence and cultural conflict and evolved to a pure state, devoting themselves to culture and art. The Aldean culture developed by emphasizing the fundamental principle that for "everything taken, something must be returned." It was this principle that allowed their civilization to ascend to incredible heights in technology and art.

Having reached enlightenment, hundreds of centuries ago, the Aldean society retreated from the rest of the Milky Way Galaxy. To facilitate this, their Progenitors built an enormous and advanced planet-wide defense system. The system, run by the computer called the Custodian, maintained an immense cloaking device and defense shield, in addition to a repulsor beam] powerful enough to push starships several hundred light years away.

However, the long-term effects of the planet's defenses were extremely damaging. Millennia after the Aldeans retreated behind their cloak, cumulative wide-spread environmental damage, including depletion of their ozone layer, began to take their toll. The Aldeans suffered from long-term chromosomal damage from radiation poisoning due to exposure to their sun's ultraviolet rays. By 2364, the entire population of Aldea was infertile and depleted. No child had been born on Aldea for more than thirty years, and most of native wildlife on the planet, including all the fish in their oceans, had long ago become extinct.

To try to rectify their dire situation, they attempted to kidnap various USS Enterprise-D children in the year 2364, including Wesley Crusher, to repopulate their planet. After the failed attempt, the Aldeans agreed to accept help from the Enterprise to relearn how to properly use their technology, never again to use their shield or cloaking device, and medical treatment reversed the radiation poisoning in the population, which would restore fertility in time.

On that day in 2364, when the Enterprise deactivated the Custodian for them, the sky ceased to be purple, and took and the natural gold and and orange colours of its atmosphere. As beautiful as the planet became, it was also bared to the threats of the Galaxy. More so, since Starfleet could do little in terms of helping the Aldeans decipher and learn how to use the Custodian.

Given the centuries of gradually increasing sterility, Aldea's surface was littered with ghost cities of varying size and degree of decay. The entirety of Aldea's indigenous population had withdrawn to the Aldea Prime long before the Enterprise encountered the planet in 2364. In 2381, these ghost cities housed bands of brigands and pirates that leached off transports and shuttle traffic on- and off-planet. While consisting of many different species, these bands of illegal immigrants on the planet were becoming more and more organised, and increasing in numbers. Their main ambition was to overcome unique scientific discoveries and prototypes made by the Aldean units, so they could be sold to the highest bidder on the interstellar black market. These bands were something that the Klingon Defence Force helped the Aldeans eradicate to the best of their abilities, but as of 2381, the problem still persisted.

In the remaining, bustling city of Aldea Prime, the purebred Aldeans and the gestalts lived their life of scientific and artistic discovery, while the Klingons defended the city from on- and off-planet threats. There were about 10 000 Klingons living in the city as well as the ships in the Epsilon Mynos System. Besides Aldeans, Klingons and the brigands in the wastelands, there were about 200 000 temporary residents from other worlds in the city. Getting merchant or work permits and access to the city was a complicated matter for those who sought to visit in such capacities, while tourism was regulated by high entry fees and background screening. Given the previously mythical status that Aldea held in the galaxy, there were a lot of explorers and fortune-seekers coming to the planet. Given the close resemblance to Humans and the monetary compensation for donating to the Gestalt Program's gene pool, these visitors were often hand-waved through customs and visiting protocols - despite how this might become a security issue. There were, of course, Humans who sought to live permanently on Aldea, and they were the only individuals considered for Aldean citizenship. 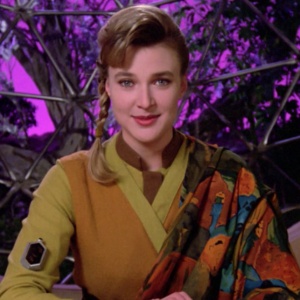 Rashella, an Aldean female from 2364, wearing a chlamys from that time. The purple sky was an effect of the old Custodian planetary shield. Image by Paramount.
The Aldeans were physiologically very similar to Humans, which presumably was a deciding factor when they contacted the USS Enterprise-D in 2364. Their heart was in the center of their chest and their lungs had a more horizontal shape. Their tongues were slightly longer than humans because of a different intermediate step of evolution where Aldeans had a more elongated snout-shape to their face, but none of this evident any longer. They also had no pancreas or thymus, such functions fully handled by their liver instead.

With the planet habitable again after 2364, the Aldeans were not governed by the laws of the Federation against eugenic experimentation, so they used it as a means to accelerate re-population. This means of re-population hadn’t been available to them before the Custodian went offline, the gene-assembly technology becoming reliable only after Aldea’s borders were opened. The method chosen was to collect the DNA from all the available Aldeans and add the Gestalt Program’s gene pool. With the program up and running in 2366, three facilities in Aldea Prime’s city centre began to assemble new Aldeans. They were called gestalts, and were products of cloning individuals from the collected gene pool. While the clones were infants, they had an accelerated ageing and maturity process - being adults only after five years.

Unfortunately, the gestalts - who were easily distinguished by a simple tricorder reading - were considered second-class citizens, even though they were identical to other Aldeans. As of 2381, it remained a sensitive topic for the Aldeans. It certainly didn’t help that rumours about illegal gestalts had begun to spread around 2381. These individuals were enhanced beyond regulations, and were popularly called malfeasants.

On top of these issues, gestalts of fourteens years and older had begun to randomly die off, cause unknown, even if the bodies were only equivalent to that of thirty-five year old purebred Aldeans.

Aldean society was structured into units, or social groups, which specialized in a particular art or pursuit such as medicine or science. Within each group students were fully devoted to their discipline. The Aldeans had perfected their system of education and study to the point where the natural abilities of the individual blossomed very quickly, sometimes within hours or days of the student's first exposure to a medium.

The Aldeans were split into several factions after the events. One faction, lead by Radue, favored joining the Federation. Another faction wanted to ally with the Romulans. A third with the Klingons. Yet another faction wanted Aldea to remain isolated. In the end, it was the Klingons Empire who became the faction that the Aldeans allied themselves with. Because of it, some fledgling signs of Klingon culture had become to influence the Aldeans as of the year 2381. One notable difference was the influence of Klingon detailing in their fashion.

Both men and women wore long dresses with different collars and accessories, cuts and colours. These long dresses - which Federation universal translators called a chlamys - were worn by all Aldeans save workers with duties where such garments would be impractical. Those workers would instead use a kind of form-fitting, thin coverall that didn't get stuck in machinery and the like. Undergarments held a plethora of different designs, and they often worse sandals or slippers. They never wore trousers, however, since such garments were considered impractical and strange in their eyes.

The duality of Aldean technological advancements was plain, in how they made great scientific progress in many fields, but were too reliant upon the Custodian to make many advances in terms of engineering and technology. Since 2364, the Aldeans had been struggling to catch up with this detriment, and their technological progress was often made with trade for foreign solutions. Their phaser weaponry was very akin to the Federation's, and their replication systems were on par with that of most other species. They had little in terms of a fleet of their own, their defences having relied on the Custodian - and still do, if push comes to shove.

The most featured technology they possessed was their hexagonal communicators, which they traditionally wore on their right upper arms. These communicators did not have to be worn there, however, much it was a matter of etiquette when serving in some official capacity. The Aldeans used this communicator to access the overlay Custodian Network, that was built to harness the latent features of the deactivated Custodian system. The communicators practically worked like a cellphone might in the 21st century of Earth, but they could also request Transportation for a high fee of Aldean Stars - the non-replicatable currency used on Aldea.