Ensign Irnashall “Shall” ch’Xinya was an astrophysicist who served aboard the USS Theurgy during the battles against the corrupted Starfleet Command in the late 24th century. 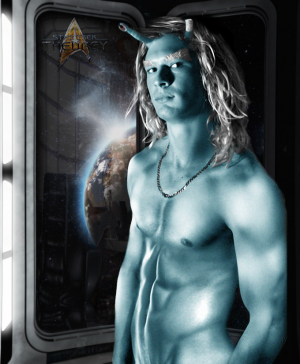 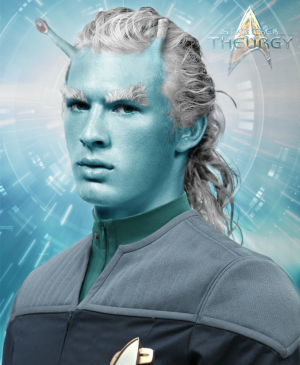 The first successful birth to his shelthreth, Shall was a welcome addition to his family. As a chan, he was given whatever he wished, but luckily he didn’t want much.

His schooling was interesting, even for an Andorian he was aggressive, even getting into several fights. Luckily for him though, a science teacher noted his curiosity in the classroom and worked with him after hours (and with his parents). A love of science was born after the first month, and over time Shall’s passions turned to the stars. One of his best memories of his childhood is a family trip to the Northern Wastes as part of a final project in his schooling. A week in the wilderness doing pure research…he was in heaven. The only thing that tops that in his mind was his bonding to a shelthreth: the three he will join with to create the next generation of Andorians.

Shall and his shelthreth participated in their first bonding in the interregnum between his basic schooling and arrival at Starfleet Academy. Renting out a cabin in the Northern Wastes, Shall and the others first night was a little awkward. Not really knowing each other, they spent their time simply trying to get comfortable with each other. Jay and Tavin’s clashing personalities didn’t help matters, luckily Shall and Syora were able to slip away and get comfortable on the porch. The tension inside finally broke when out of nowhere, Jay came barreling out of the cabin stark naked and proceeded to dive into the snow, rolling around and making snow angels as if she were a child all over again. Bowing to the absurdity, the four left their apprehensions behind and began to truly bond. In the end, no children were born from their first time together, so Shall will usually speak of the event with a hint of sadness.

He remained in close contact with the other three throughout his Academy years, as well as his first few months after graduation. He was looking forward to his first round of shore leave, a trip back to Andoria was all planned out, he would depart shortly after the Theurgy returned to San Francisco.

This was not to be.

Running for his life with the rest of the crew, Shall threw himself into what work he could (there wasn’t much use for an astrophysicist when you’re trying to evade half the Starfleet) the chan spent a lot of his time during the trip repairing the various sensor arrays and looking for anything of value or any ships looking for the ship. Once they arrived at Niga, things started to get interesting for the Andorian. Thanks to the tactical nature of the Theurgy, the walls between his quarters and the crewmate next door weren’t soundproofed very well, and on the first night her moans were so loud that she was keeping him awake quite late. Pounding on the wall to shut her up did stop the unwanted noise, but caught the attention of his neighbor. To his surprise, she burst into his quarters with her partner, the two women overpowering the Andorian quite skillfully for the infected. Succumbing to the virus that ran rampant throughout the ship, Shall became an agent for the plants, but thankfully he has little memory of his actions during the infection. This is little comfort to him though, unlike many Andorians, Shall is quite dedicated to his bondmates, and to him this was a betrayal of them. As the crew picked up the pieces he secluded himself in his quarters, or his lab, brooding over his star charts.

What little progress Shall had made at coming to grips with his situation was thrown right out the airlock with the arrival of the Ishtar entity. While he was able to resist her first attempts at feeding off of the crew’s energy, as her power grew Shall was subjected to a fantasy wherein he was back home with his shelthreth. The old drives kicking in, Shall eagerly jumped into a bond, not catching on until much later that the faces of his “bondmates” were actually the faces of three crewmates. This proved devastating for the Andorian. Casual sex with others isn’t against Andorian mores, but this was something else entirely. After the crew was released from Ishtar’s influence, Shall locked himself in his quarters when not on duty, throwing himself into a self-imposed seclusion in an effort to understand.

The attack by the Calamity helped to bring Shall out of his quarters, if only to get back to work repairing the damaged sensor arrays once again. Taking use of the Theurgy’s landing on Theta Eridani IV to do a more extensive job, Shall spent a lot of time outside on the hull, assisting the engineers and technicians replace external components. On the first night, his crewmates managed to drag him away from the ship and to the thermal springs for some R&R. His Andorian physiology made it a bit of an uncomfortable experience (he’d been in hot springs before, but never when the air temperature was already so high), and the single glass of ale really didn’t help. Thankfully he managed to keep his wits about him, though he nearly had to be carried back to his bed at the end. His work put him in direct harm when the Calamity returned; in the ensuing attack the Andorian suffered a serious injury: the severing of his left antenna. A crippling blow by his species’ standards, the chan ended up in Sickbay while the Theurgy was confronted by Task Force Archeron and the return of the Calamity.

During his stay in Sickbay, Shall ended up bearing witness to Cir'Cie and her mind-melded companions attempt to seize control. Weak and unable to stand for more than a minute, he couldn’t do much but make himself small on the pad he had on the floor. Despite that, when he saw what one of the mutineers did to Ensign Vinata Vojona, his blood burned only as an Andorian’s could. His helplessness in the face of such a travesty will haunt him for a while, and was one of the main drives in his recovery.

A day after the Calamity’s destruction, Shall was released from Sickbay back to his quarters. He wouldn’t be able to stay off of duty for much longer though, even with the newly-combined crews there was a shortage of manpower, and with Starbase 84 on the horizon, every hand was needed. He was quite the sight for a while, the loss of an antenna destroys an Andorian’s balance, so one minute he would be walking perfectly fine only to suddenly topple into a bulkhead. Adjusting to the loss will be an ongoing process, assuming he survives the coming storm.

Heavily tattooed dark blue skin, hair cut extremely short. A bit of a wild woman, she does not live up to the stereotypes of her gender. A construction expert, she travels all over Andoria and its colonies on whatever projects she is assigned.

An engineer by trade, she’s a typical Andorian: prideful, but not the most outspoken. Some wonder if her hair has never been cut as it is bound in giant braids and dreadlocks, decorated with streaks of dyes, ribbons, and beads.

The quietest of the bondgroup, he is a priest of Uzaveh. He is seen as the anchor of the shelthreth by the others due to his calm temperament and willingness to listen to everyone’s troubles. His skin has a bit of a greenish tint to it; it’s not known what part of his ancestry contributes that.

Shrall is the consummate Andorian: prideful, arrogant, passionate, and stubborn. Many people consider it lucky that he had been exposed to the sciences as a child, when things don’t go his way he can have a tendency to lash out at his obstacles like a bloodthirsty Klingon. Despite this, he is quite devoted to his shelthreth, and his family after that. They are never far from his thoughts. The Theurgy’s situation has led to Shrall developing quite a temper, and while he has yet to truly lash out at his crewmates, it could be only a matter of time.

As a scientist, Shrall is methodical, running down a hypothesis to the smallest detail. When he is in his lab, very little can pull him away until he’s satisfied with the results.

While Andorians learn combat via Ushaan, Shall favored a quarterstaff over the ancient ice-climbing tool. He always enjoys having the advantage of reach over his opponents, and always looks for such an advantage in combat, be it physical, or mental. One distinct advantage his staff has is the fact that it is a custom-made retractable staff; when not in use the staff is small enough to hang from a belt, but with a quick action it will extend out to around 2 meters.

Thanks to some Aenar genes, Shrall’s blue skin is a bit paler than the norm, though it’s only noticeable to “pinkskins” when he’s standing in a group of other Andorians. His metabolism helps keep his weight down and physique trim, more so than the standard set of Starfleet-required exercises. His antennas extend from the temples of his forehead, and even have a small notch in the tips, another hallmark of his Aenar ancestor. Currently, the left antenna is nothing but a stump, the unfortunate result of the Calamity’s attack.