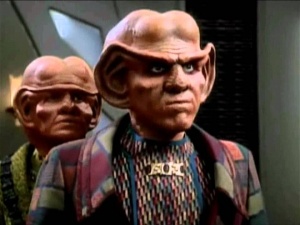 Ferengi were short, unimposing beings, noted more as merchants and traders than as warriors, scientists, or engineers. Their culture promoted the acquisition of material wealth, and their society was extremely capitalistic, with most routine activities accompanied by the exchange of a precious, non-replicable substance called latinum (a room-temperature liquid metal, often stored within gold “slips,” “bricks” or “bars”). Ferengi discriminated between their genders considerably, with female Ferengi not being permitted to own property or wear clothing; enterprising female Ferengi invariably found a way around these restrictions.

Ferengi physiology did not lend itself to physical activity, nor did their culture value such hardship, though they had a high resistance to many common diseases. Ferengi had exceptionally keen hearing, and highly-sensitive ears, though this also meant that intense sounds (and physical force applied to the ears) could inflict debilitating pain. Their unusual brain structure with four brain lobes did so that telepaths couldn't read Ferengi minds. Culturally, Ferengi were acquisitive, regarding the accumulation of wealth as the highest virtue, and while this had given them a reputation as cunning negotiators, they were also often seen as duplicitous and manipulative as well.

Hailing from Ferenginar, The Ferengi Alliance was a patriarchal civilization whose entire culture was based around trade and profit facilitated by the 285 “Rules of Acquisition.” While Ferengi pirates had plagued the Federation even before their first official meeting in 2364, the two powers remain neutral.

In the 2360s, Starfleet's initial interactions with the Ferengi were largely hostile in nature, mostly due to a mutual misunderstanding of each other’s species. Since then, the Ferengi consistently pushed a neutral position in most matters. However, their main focus was the pursuit of wealth, and it was clear that they will worked for either or both sides of a conflict if there is gold-pressed latinum to be gained.

That being said, the Ferengi were fierce negotiators and had dealings with arms traders and merchants throughout the Alpha Quadrant. Of notable interest to Starfleet Intelligence was the fact that there was a Ferengi presence on Deep Space 9, which put the Alliance and their insatiable need for the next deal within easy reach of the Gamma Quadrant when the borders of the Dominion were opened. Some species that had come through the wormhole had interacted with the Ferengi on the station, and it was possible that the Ferengi used to make financial inroads with members of the Dominion. After the Founder Odo closed the borders to the Dominion, it is unknown what business enterprises were being made by the Ferengi. Rumors of the Ferengi continuing to have trade connections with the Breen, the Cardassians, and the Orion Syndicate still flourished as of 2381, and it suggested that while they may be presenting an official neutral stance in galactic politics, they were almost certainly working behind the scenes and were more involved than one would normally expect of a truly neutral party.

Their technology and scientific knowledge was roughly analogous to the Federation, though as stated earlier, they were far more focused on the pursuit of wealth than in military conquest or combat. Ultimately, while the Ferengi were not an immediate threat to the Federation, it was advised to keep them at arm’s length.