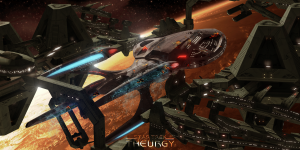 This page is for planning events during the Aldea Prime Anthology, which takes place between Seasons 1 and 2 of Star Trek: Theurgy. Each day will have a bullet point list of events including the time in which the events occur. This, to aid all writers in orienting themselves around what their characters might be doing before and after each event. Here, the surgeries of the abductees can be scheduled, with cosmetic surgery taking 1 hour, and DNA re-sequencing taking 8 hours (plus one full night's sleep). Away missions and major events can be listed here as well. This Calendar is available to be edited by everyone, so please make sure to add relevant events! Just remember to use past tense, like in the rest of the wiki.

The Aldea Prime Anthology begins on the 11th of March 2381, and more days will be added as the weeks are opened up for story development. Here you may find available Story Objectives to be fulfilled if you have no plot ideas of your own for your characters.

Those are the currently available days in the Aldea Prime Anthology!