Lieutenant Commander Kai Akoni was the Chief Security officer aboard the USS Endeavour prior to the destruction of the ship at the hands of the Borg. Akoni abandoned ship aboard USS Niger, following the destruction of the Endeavour. As of March 2381, he served on the USS Theurgy, aiding in the opposition against the parasites that compromised Starfleet Command in the end of the 24th century. 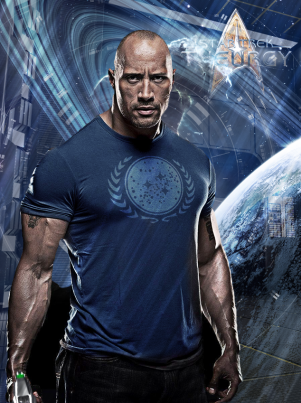 Kai Akoni was born on February 4, 2351 in Calgary, Alberta, Earth to his parents Hans and Leilani. He was named Kai which means ocean in Hawaiian. From an early age, Kai was always taught about the values and necessity of Starfleet. This was important throughout his childhood as his family had a history of service in Starfleet right from its very beginnings before the founding of the Federation. Even though his father was hardly around, Kai had no qualms with this as he understood, even from an early age, that service to both Starfleet and the Federation was of the utmost importance. It could be said that his future service in Starfleet was predetermined for him before birth, but nevertheless his parents gave him the option to join or not.

In 2369, Kai applied to and was accepted by, Starfleet Academy. He attended Starfleet Academy with a specialization in Security, like his father. Kai enjoyed the structure and discipline provided by Starfleet Academy as this was similar to his upbringing, and therefore felt like a second home.   In 2372, Kai graduated 2nd in his class at Starfleet Academy and was subsequently awarded the Starfleet Academy Top 15% of Class Ribbon. His parents were both able to attend his graduation and his father was especially proud of him as he could see that his son was living up to his potential and seeing that Kai was better than he was at that age.

Following graduation, Kai was assigned to the USS Oberon, which was part of the 4th Fleet. Upon reporting to the Oberon, Kai was assigned as a junior security officer performing routine patrols of the ship as well as watching prisoners in the brig. Kai had a specific picture in his head of how a Starfleet Officer should act. This would take a bit of time to work through as he would compulsively feel the need to report all infractions to his supervisors, no matter how minor. It took Kai a few months to get acclimated to the day in, day out work of working security on a starship. He thoroughly enjoyed his duties though and craved being busy.

In December of 2373, news reached the Oberon that war had been declared against the Dominion/Cardassian Alliance. The 4th Fleet was ordered to take place in an engagement against the Dominion, which would later be come to be known as the Battle of Rumarda]. This battle was a decisive Dominion Victory with over 54 starships destroyed. This was Kai’s first taste of combat and he participated in the repelling of Dominion boarding parties. Following his personal performance during the battle, the Chief of Security aboard the Oberon was impressed and started to assign Kai to more duties including Away Mission rotations and simple investigations.

In mid 2374, Kai was transferred to the USS Twarel, 37th Fleet. The Chief of Security on the Oberon told Kai that he had extreme promise and this transfer was a better choice for Kai as it gave him room for promotion and greater learning opportunities. Kai was looking forward to going to a new ship, because a new posting meant new challenges for him to face.   In late 2374, the Dominion War was not going well for the Federation Alliance, however for Kai, the war may have well been taking place in another galaxy as the Twarel was assigned to protect Alpha Centauri during most of the year. Personally though, Kai was excelling at his new posting. He was progressing with learning about and performing Investigations, as well as getting to assist in training junior officers and cadets that were being rotated through the Twarel.

In 2375, the Federation Alliance had decided to go on the offensive. After 3 prior attempts to retake Betazed from the Dominion, The Federation had decided to contribute significant resources to the Liberation of Betazed. Starfleet had ordered the 7th, 10th, 12th and 37th fleets to Betazed to participate in the Liberation of Betazed. As a mid level security officer, Kai was required to plan chokepoints about the Twarel to help contain any expected Dominion boarding parties. However, due to the Betazed resistance fighters causing significant disruption to the Dominion Command and Control on Betazed, the greater Dominion fleet in the Betazoid system was caught off guard and unprepared by the Federation offensive. Despite Kai’s meticulous planning of helping to defend the Twarel, there were no boarding parties and the Dominion fleet was wiped out.

In orbit of Betazed, the Twarel was requested to transport Cardassian POW’s to a Federation Penal Colony. While on Betazed, he saw the atrocities that were committed by Dominion and Cardassian troops. This left him appalled that a species could act like this. When the prisoners were aboard the Twarel, one of the prisoners attempted to stab another security officer with a piece of scrap metal. Kai noticed this and was able to intervene before any stabbing occurred. Kai received minor lacerations, but he also received the junior security officer’s eternal gratitude.   Following the Liberation of Betazed, Kai was promoted to Lt. (JG) and Deputy Chief of Security aboard the Twarel. The Dominion War ended shortly after the Liberation of Betazed. In late 2376 the Twarel was assigned to Cardassia Prime to help with rebuilding following the war. Kai and the Twarel were assigned to Cardassia Prime for 3 years to assist in rebuilding. This opened Kai’s eyes to the true toll of the war and how devastating it had been for both sides. At the same time, this reaffirmed Kai’s belief in Starfleet as they were doing the right thing to help a species rebuild, even though they were enemies just a short time ago.

During the time on Cardassia, Kai was assigned more and more complex investigations, as well as providing security to secured buildings and VIP protection. Kai’s excellent work ethic and desire to always keep learning impressed his superiors. Whilst on Cardassia, a Cardassian civilian had made a remark to Kai exclaiming he had wished they had killed more Federation Officers during the war. This caused Kai to snap and severely beat the Cardassian. Kai was never caught and never told a soul about this. Kai had not only felt guilt over this, as he felt this was a way that a Starfleet Officer should never act. He also didn’t tell anyone as he didn’t want his career in Starfleet to be taken away as that was all he and his family had ever known.

In January 2380, Kai was promoted to Lieutenant and transferred to the USS Endeavour to be her new Chief of Security under Captain Amasov. Kai was both excited by his new position and slightly terrified as he would be the one in charge of maintaining security aboard a Nebula-class Starship.   Kai settled into his job as Chief of Security over the next year and became increasingly comfortable in his new role. Kai was chief of security aboard the Endeavour in 2381 when it was destroyed by the Borg. Kai was able to escape from the ship aboard the runabout, USS Niger along with the XO and a handful of crew and civilians.

After the Battle of the Apertures, he was promoted to Lieutenant Commander, and came to serve as the Chief Security Officer on the USS Theurgy.

Kai was very service and duty oriented. Ever since he was young, Kai was instilled with a strong sense of duty and honour. He could come across as a blend of sarcastic and blunt. Kai also believed in separating work and home life, and when not on duty could be considered almost “fun”. Due to the fact that he had seen atrocities and lost friends during the war, along with the severe beating of a Cardassian citizen, he had become mildly racist towards Cardassians and had no trust in them. 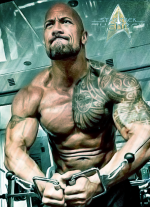 Kai was a tall man at 6’5” and weighing 240 pounds. He was very muscle bound and a very strong individual. Kai was mostly bald, however choose to shave whatever hair that remains. He had multiple tattoos on forearms and left chest relating to his mother’s Hawaiian heritage. Kai Akoni spent a considerable amount of time maintaining his level of physical fitness and conditioning.