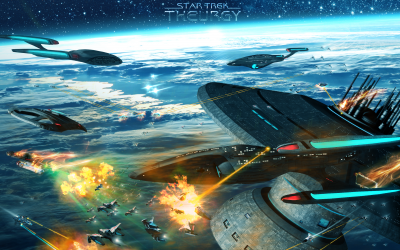 The crew of the Theurgy prepared to undertake a daring mission to Starbase 84. Situated at the edge of Romulan space, the station was fitted with a ‘whistleblower’ system – a wartime device capable of broadcasting an unstoppable signal alerting the Federation to an imminent Romulan invasion. Ives planned to use the system to send a message detailing the truth of Starfleet Command. The only issue? It was impossible to hide the source of the transmission, meaning every ship and station would know where Theurgy was.

Meanwhile, after being lost in Romulan space for three years, the Luna class vessel – USS Resolve returned to Federation space and received a hero’s welcome at Starbase 84. Soon joy turned to dismay as an Tal-Shiar operative was murdered and one of the crew was wrongly arrested as the prime suspect. While ascertaining as to why his officer was imprisoned, Captain Kendrick – Commanding Officer of the Resolve, enacted a jail break when the situation turned sour. Alongside his operations officer, Kendrick also liberated the Romulan, Drauc T'Laus, who revealed that the murder was related to a traitor who was on the station and was a Starfleet officer.

Investigating the murder, Ensign Six, along with Assistant Chief Science Officer Hi'Jak, hit a dead end when Captain Hawthorne - Commanding Officer of Starbase 84, would not authorize the decryption of the only known recording of the murderer right away, instead dismissing them both after they have handed over their findings. Shortly afterwards, they are both warranted for arrest, forcing them both to escape Starbase security, while Hi'Jak sought to leave the base with a civilian shuttle, Six attempts to gain aid from the Captain and crew of the Resolve, both to confirm that they were not the traitors but also to verify her suspicion: that it was Ian Hawthorne who was the voice on the recording, and that he was the true traitor.

Kendrick allowed the decryption and the team found that the traitor was indeed none other than Hawthorne himself. Finally understanding why his crew was wrongly accused, Kendrick led a mission to detach his ship from the station and attempt to escape. This, just as Theurgy arrived at Starbase 84.

The the battle that followed, Ian Hawthorne set the whole Air Group of the base on the Resolve, but before its warp core detonated, the Theurgy used its top saucer's unique docking feature to evacuate the surviving Resolve crew. When the warp core did detonate, Captain Ives ordered the Theurgy to use the detonation against the USS Orcus, which had arrived ahead of Task Force Archeron. The Orcus was as good as destroyed by the tactic of using the evacuated Resolve as a weapon - which would later be called the Ives Manoeuvre.

Before this happened, the dying Captain Kendrick had made it onto the Resolve´s aerowing shuttle, and in determination of ending the threat that Ian Hawthorne presented to the Federation, he flew inside Starbase 84 and attacked the Executive Office Complex's top floor, which held the Command Center. His shuttle was attacked, loosing altitude, but in order to contain the M/ARA detonation, he crashed the shuttle into the Command Center, and killed Ian Hawthorne.

Outside the starbase, Task Force Archeron arrived in full force, and Ives gave the order to call for aid from the Asurian fleet, which had been cloaked yet present during the battle - a hidden ally made with the help from Dyan Cardamone. The Asurians gave the Theurgy time to sent the Simulcast, and to have all fighters dock with the Theurgy. Unfortunately, the sacrifice of the Asurians was in vain, since Edena Rez' former host - Jona Rez - had tampered with the message, sending out a false recording of Ives threatening the Federation rather than warning them of the parasitic threat in Starfleet's ranks.

The mission failed, and with the help of Vivian Martin and F'Rell, the Theurgy could escape the sector.