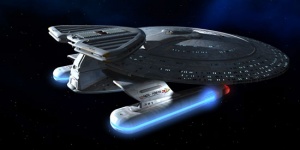 The USS Endeavour (NCC-71805) was a 24th century Federation Nebula-class starship operated by Starfleet. As of March 2381, the knowledge of its destruction had yet to reach Starfleet because Captain Ian Hawthorne on Starbase 84 made sure that their last known position was deleted from the Federation's navigation logs.

In 2368, the Endeavour joined Captain Picard's fleet that blockaded the Klingon-Romulan border during the Klingon Civil War. The ship was one of twenty-three assembled for the fleet and was one of the seventeen chosen for the tachyon network. Identified by its name and registry number, the ship's position in the network was monitored from the USS Enterprise-D.

When the network was disrupted by a high-energy burst released by the Romulans, the net was no longer effective in a radius of ten million kilometers around the USS Sutherland. Subsequently, Picard ordered the fleet to proceed to Gamma Eridon at maximum warp, where the fleet would attempt to reestablish the net before the Romulans got there. (TNG: "Redemption II")

Later that year, the ship was on a mission in the Cleon system. (TNG: "The Game")

Captain Amasov of the Endeavour was involved in a conflict with the Borg sometime prior to 2371. After the encounter, Amasov reflected, "...It is my opinion that the Borg are as close to pure evil as any race we've ever encountered." (VOY: "Scorpion") In 2373, the Endeavour again faced the Borg at the Battle of Sector 001. (Source: Memory Alpha)

In 2380, Lieutenant Commander Emelia 'Blue' Tiran was assigned to the Endeavour as chief engineering officer and was still serving in that capacity at the time of its disappearance in late February of 2381. At the same time, Marlee Hailey was assigned as a civilian scientist aboard the Endeavour to aid in the creation of a new sensor system designed to try and detect cosmic strings more effectively. CONN Officer Laurel Okhala served aboard the Endeavour from the time of her cadet cruise in 2378 until it went missing.

It is believed that the Endeavour was the victim of an attack by the Borg, but as of April of 2381 the ship's fate is unsubstantiated.

These are the known crew of the USS Endeavour at the point of its destruction in late February of 2381: