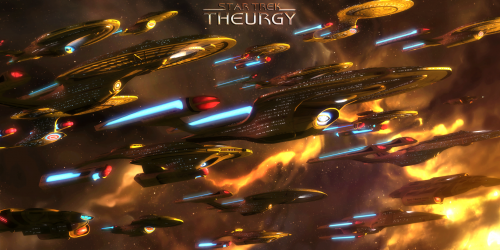 Image made for Star Trek: Theurgy by Jetfreak-7

Task Force Archeron was a task force created to hunt down the USS Theurgy. There were originally twenty five starships assigned to the task force until the USS Harbinger defected to the Theurgy's side. When the hunt for the Theurgy began, there were other starships in the Task Force, but after the Theurgy destroyed them, they were replaced.

Task Force Archeron was infected with the Soup Sandwich program thanks to coordinated communications over subspace frequencies, a virus of Carrigan Trent's design. Trent released the virus when he defected to the Theurgy.

When the task force joined the Battle of Starbase 84, is was twenty-seven starships strong with, among others, the latest addition of the USS Orcus.