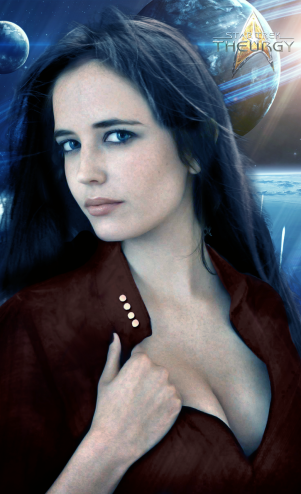 Captain Anya Ziegler was the commanding officer of the USS Cayuga in 2381. She had previously served under Captain Ives as executive officer on USS Theurgy and had been succeeded by Commander Nerina when Ziegler had gained her own command. Although initially suspected, it is yet to be determined if Anya aided in the opposition against the parasites that compromised Starfleet Command in the end of the 24th century.

Anya Ziegler was born to David and Lara Ziegler in 2343. From an early age she developed an appreciation for the ancient, it was difficult not to when you grew up amongst the decorated facades and baroque buildings with bay windows that dotted the medieval old town. Knowing the buildings around her held stories of their past, she attempted to learn them all, often bringing back books from the library to read with her father.

Lara, a concert musician by trade, attempted to impart her love of music onto her daughter often without success. Anya was more interested in the how and why they worked, rather than using them in the way her mother hoped. Eventually one did stick, and Anya continued in her piano lessons through to her late teens, mainly as appeasement.

It wasn't until the family took a shuttle to Luna to see Anya's Aunt in New Berlin at the age of eight, that she discovered the majesty of space flight. That first evening the family waited up, watching the slow rotation of earth and when it the time was right, David pointed out Schaffhausen. It was so small, not visible to the naked eye. It was a startling revelation. Her home city had held such history, so many stories. It boggled the girl's mind to think that a tiny speck of her vision could hold so much, and if that was the case, how much was also out there in the universe? The entire shuttle ride home, Anya made plans and set her resolve. She would see as much as she could.

Starfleet had come to her school previously, but the next time she listened with razor-sharp intent. Little did those officers know, that when they left that school in the north of Switzerland, they had helped set the rest of one questioning little girl's life.

In 2361, Ziegler joined Starfleet Academy. She had set her eyes on the center chair and would do almost anything, often forgoing friendship and lovers to get there. By the end of her first semester, she had earned a reputation of being stuck up, unyielding and difficult to work with.

Towards the end of her first year at the academy, she led a group of cadets on a hike. The objective was to work together and find a route out of the forest. Everyone expected Ziegler's team to be the first home, not because of Ziegler's skill as a leader, but more that one of the cadets in her team was a local to the area. Ignoring the advice and help of her classmates, Ziegler lead them on a long, arduous journey and finished hours after the other teams. Finally, after listening to the many complaints of her colleagues to their instructors, did Ziegler begin to understand the importance of integrating and working with others.

Throughout the rest of her time at the Academy, Anya excelled academically and worked hard at making friends. For her final two years, she dated fellow classmate James Donnelly.

In 2364, Ziegler graduated and was commissioned as an Ensign, assigned to USS Fredrickson. The excelsior class vessel provided ample experience for the young officer and within a couple of years Ziegler managed to get promoted to Lieutenant Junior Grade.

While she managed to make friends, Ziegler didn't manage to find a new partner. She often found her mind wandering back to that short, but wonderful time back in the latter years at the academy. So, when new listings became available, she placed in a request to transfer.

Ziegler transferred to the USS Veracruz in 2367. On the day of transfer, she made her way to Ensign Donnelly's quarters. When the door was answered, she did not find herself face to face with her former lover, but their new fiancé. Distraught, she excused herself and was found sobbing by Anderson West, a newly commissioned Conn Officer. Anders, as he liked to be called, took in Ziegler and helped cheer her up. A friendship blossomed almost immediately.

Ziegler served on the Veracruz throughout the Dominion War. In 2375, the ship brought relief troops and engineers for the besieged forces defending a captured Dominion communication array on AR-558 in the Chin'toka system.

Following the death of the second officer in 2376, Ziegler was promoted to take their place and served alongside completing her normal duties. Anderson West transferred from the Veracruz in 2377. Ziegler promised herself that she would serve with her friend again.

In 2378, Ziegler joined the USS Theurgy on her maiden voyage as Executive Officer.

Working under Captain Ives was initially an unusual experience, and Ziegler struggled not to separate the captain into two parts, treating them differently depending on their respective genders. Quickly the captain proved a capable leader, no matter their guise, helping Ziegler deal with her own personal prejudice.

Over the years working together, Ziegler kept Ives aware on her desire to one day to be a captain.

Shortly before the next scheduled mission to Romulus, Ziegler received confirmation that her application for captaincy had been approved. Although this was good news, Ziegler felt bittersweet to say good bye to Theurgy, chosing to sit down and brief her replacement, the newly promoted Commander Nerina.

In 2380, Ziegler achieved her ambitions and took command of the USS Cayuga following the retirement of Captain Maxwell Stott. One of her first orders as Commanding Officer was to request Anderson West, now a commander, to join her as Executive Officer.

When news of Theurgy´s defection broke, Captain Ziegler was interviewed and debriefed extensively by Starfleet Command. Eventually cleared of suspicion, Ziegler was side-lined from any investigations involved Theurgy and instead assigned to patrol duties and cataloguing of astral phenomenon.

Most recently Ziegler was ordered to undertake an exploratory mission inside the Azure Nebula. Due to the sensor and communication disrupting nature, the crew of the Cayuga - Ziegler included, expected to be without contact with Starfleet for almost the entirety of their mission.

The mission was progressing well when the ship met with an unexpected adversary - the Borg. Fighting valiantly, the crew managed to drive off the cube, but the Cayuga suffered heavy losses and damage. With little else do, knowing the most communications would be sucked up by the blue mass surrounding them, Ziegler set a distress call on repeat and set about helping with the repairs. She knew, that there was a small chance that those unlucky enough to also be travelling in the azure nebula would hear her voice, echoing on and on.

Anya Ziegler was ambitious, driven and proud - sometimes to a fault. She could initially come off as cold, skeptical and uncaring to those that met her, but for those she liked or those that persevered, she was an open and honest friend.

Ziegler held a desire to, where possible, defuse situations amicably rather than through conflict. She believed that it was better to solve things through open communication, negotiation and mutual understanding rather than over the emitter of a phaser. However, she was not above putting aside these ideals when needed, freely admitting that, occasionally, extreme times called for extreme measures.

Wherever possible, she liked to keep her work and personal life separate. As such Ziegler considered herself as a private person, enjoying a good book in the sanctity of her quarters or a quiet evening with close friends. She vowed to never become romantically entangled with someone under her command.

With soft, porcelain skin and long dark hair, Ziegler considered herself of average height, size and weight. Primarily for the chance to unwind, both physically and mentally, Ziegler kept herself fit by running and was often seen on a circuitous route around the halls of Cayuga - running at least 5km, three times a week.

When on duty, Anya preferred to tie her hair up. This allowed her the satisfaction of letting it down and having a glass of red wine at the end of a long day.