Before she ended up in cryogenic stasis at the end of the Battle of the Apertures, Lieutenant R'Rori was the Chief Counselor on the USS Endeavour. S/he went missing in action after Starfleet lost contact with the Endeavour in late February of 2381, the Nebula-class ship having been attacked by the Borg. She had managed to get aboard an escape pod, only to be abducted by the Savi after a couple of days. She underwent Correction upon the Versant, and afterwards, she was no longer a Caitian and Human hybrid. The Savi almost removed all traces of Caitian genes, but the Correction was only partially complete, since she still retained her ears and her tail.

It remains unknown if R'Rori aided in the opposition against the parasites that compromised Starfleet Command in the end of the 24th century.

Born as one of a pair of identical twins to a Caitian mother and Human father, R'rori spent much of hir childhood as one of the Vegan colonists. Hir mother had met hir father during his short leave on the colony and the two quickly hit it off, paving the way to an often long-distance relationship and marriage and the birth of the twins. Growing up, the twins stayed close to each other and their mother, forming a close-knit family that treasured every moment they got with their father during his shore leaves from Starfleet. While their mother taught the twins both Caitian and Federation cultural norms, the twins each took to it differently, hir sister, R'Rala, took to embracing her Caitian heritage far more than R'Rori did. R'Rori hirself took more to the Federation ideals, complementing hir twin's views and outlook on life. Though identical and largely in sync, the twins found themselves diverging more as they grew older, somehow always complementing the other's strengths and weaknesses.

As R'Rori came of age and began the application process for the Starfleet Academy, hir father's ended up assigned to a task force to intercept a Borg cube at Wolf 359. In the resulting battle, the ship he was one was one of those lost with all hands. When s/he got the news, it nearly derailed the application process for hir but s/he managed to get hirself together enough to get through with the help of counselors that were offered to hir. S/he was accepted into the medical track, ultimately choosing to specialize into the counseling program, feeling this was where s/he could make the best impact both for hirself and more importantly, for the people around hir. In the wake of the Battle of Wolf 359, R'Rori saw a level of grief and fear that was far beyond anything s/he experienced prior and s/he wanted to help people heal in a way that medical physicians couldn't.

After the initial year of healing and struggling both with the stresses of a completely alien and disciplined life with the grief s/he felt for hir father's death, R'Rori found solid footing beneath hir again and began to excel in hir classes. S/he did her cadet cruise and supervised clinical hours on the USS Hornet, and once she gained her commission as an Ensign upon graduation from the Academy, hir first assignment took her to the USS Grant in 2372.

The USS Grant was a quiet assignment and R'Rori essentially served as a junior counselor to the one already aboard, collecting additional hours and education towards a master's degree in therapy. S/he focused her efforts on gaining more first-hand knowledge and experience with how people adapted to a life in space psychologically and what hir place was in allowing hir fellow crewmembers to remain, in a word, sane in space.

Upon the outbreak of the Dominion War, s/he requested a transfer to a station, specifically to work with Starfleet officers and potentially civilians that were survivors of the Dominion's war on the Federation. S/he also recalled still too vividly hir father's loss on a starship in battle and R'Rori wanted to avoid that if s/he could. S/he was granted the transfer and assigned to Starbase 146 in 2374, taking hir place as a member of a team working with the physical therapy and trauma wards. It was at the starbase that s/he completed hir masters finally and ended up securing a promotion to Lieutenant (Junior Grade) both in recognition of the increased education and hir work in healing survivors from the trauma of the war.

The war was ended finally with the signing of the Treaty of Bajor and R'Rori stayed aboard the station, enjoying hir time in a place surrounded by people s/he came to know intimately, if in a somewhat transitional state, as part of that team. S/he felt like s/he was making the difference that s/he wanted to on joining Starfleet. As the Federation began recovering from the war, it became apparent that experienced crew were going to be needed aboard ships more than stations as more keels were laid and the focus returned more towards the Federation's original focus of exploration and peace somewhat. In 2378, s/he accepted a promotion to Lieutenant and transfer to the USS Endeavour as its chief counselor.

Life aboard the Endeavour proved to be a good fit for R'Rori as it was more relaxing than hir prior assignment, but still managed to keep her busy with both administrative and counseling work. Most of what s/he dealt with were typical of ship's crews that operated near the borders - feelings of isolation, sometimes fear, rivalries that could sometimes spring up and spill over, and to hir pleasant surprise, a crop of cadets that were aboard for their cadet cruise. S/he spent time with as much of the crew as s/he could, both in therapy sessions and sometimes off-duty, always careful to balance forming the bonds needed for trust with the distance necessary to practice her counseling effectively. It's a precarious balance that's now been thrown into disarray as R'Rori has found hirself in an escape pod following the destruction of the USS Endeavour at the hands of a Borg cube. So few of the crew survived and now s/he was in danger of being another casualty.

She managed to get aboard an escape pod, only to be abducted by the Savi after a couple of days. She underwent Correction upon the Versant, and afterwards, she was no longer a Caitian and Human hybrid. The Savi almost removed all traces of Caitian genes, but the Correction was only partially complete, since she still retained her ears and her tail.

At hir core, R'Rori was a pacifist, believing in setting a course of non-violence whenever possible. This came out somewhat in hir dietary habits as s/he was a fairly strict vegetarian, eating meat only when as a guest of another. S/he trained hirself to have a calm demeanor and to be slow to anger, knowing the consequences of allowing anger to influence hir response. She was very protective of hir spaces, both personal and professional, considering them to be inviolable safe spaces for hir and others s/he allowed in as part of hir life and practice. Hir years of experience and training allowed hir to cultivate a friendly and open personality that nonetheless carefully maintained distance between hir and others, particularly patients. This is a necessity in a field that requires hir to be consistently empathetic.

This distance is also one that applies to hir personal life, as R'Rori was an asexual and not particularly interested in relationships either. Friends were carefully chosen and those relationships had strict boundaries with careful maintenance that R'Rori ensured would stay in place. S/he was a warm individual, however, and took pains to ensure that the people whose company s/he enjoyed and desired knew of their meaning to hir through generosity and platonic affection.

Most of hir time off-duty was spent reading, typically literature related to hir profession to keep up with best current techniques and practices, but also a wide variety of classic literature and fiction. As a form of self-care, s/he also embraced meditation and a pursuit of mastering the violin to keep hirself centered and calm. 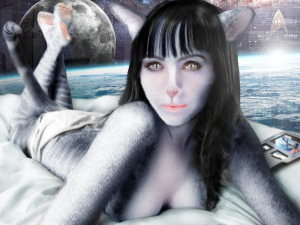 Image: R'Rori when s/he was a Human/Caitian hybrid.
Like hir outward personality, R'Rori's physique was carefully maintained to be as close to androgyny as hir feminine body allows. It was slender, straddling the line between woman and feminine man. A coat of smokey gray fur coated hir rather human body, the tail and ears also serving to give away hir mountain Caitian lineage. Hir face is a curious mixture of Caitian and human features, the prominent features being the unusually shaped nose of Caitian/Human hybrids and large silver eyes.

S/he adopted at all times an easygoing, non-threatening posture that helped put hir patients at ease, and this extended to hir voice, kept soft, honey sweet, and which often emphasized a purring tendency inherited from hir mother. Hir hair was kept loose and long.

Like other such hybrids, hir senses, reflexes, and dexterity were somewhere between human and Caitian ranges. Hir vision was better in low-light situations, but less adept at focusing on at medium to long ranges. Like Caitians, s/he had retractable claws and a semi-annual heat cycle that s/he mostly just medicated or weathered, seeking a physical solution only in a pinch. S/he never trained hir body enough to push the limits on hir endurance, strength, and stamina, keeping only to the Starfleet standards for hir profession.

Although R'Rori identifies strongly as non-binary and adopted the s/he and hir pronouns that are most recognized with Hermats, s/he is not uncomfortable with being seen as female as s/he is aware that women are generally treated as less threatening. This is, again, something s/he chiefly sees as an asset for hir practice and somewhat of a necessity to deal with.