Before his death, Ian Hawthorne was a Starfleet officer and the Base Commander at Starbase 84 in 2381. He was also the adoptive father of Cameron Henshaw. He was killed in the Battle of Starbase 84, having been infected by one of the parasites that also infected Starfleet Command.

At some point in Ian's past, which he rarely if ever discusses, his childhood family was horrifyingly mistreated in an unjust way by the local community. As a little one, he was the kind of quiet, studious child that always got ignored at school. He was not shy, just self-contained, devoted to his studies - history in particular - just to shut out the situation at home. It was a personal, dark struggle. It lasted until he got through university (gaining a Masters in Political Science) and joined Starfleet. He left Bristol behind, and from that day on, he was obsessed with justice. He even toyed with joining the fleet's judicial wing, but in the end the call of the stars proved to be too much and he became an officer in Starfleet Operations.

His service on the USS Principle was quiet at first, until a sudden and instinctual bout of bravery changed the course of his life. When an away team he was on was attacked by pirates and its shuttle destroyed, he managed to fight off the criminals and keep every injured member alive until rescue could arrive two days later. This got him his first promotion and the Star Cross. One of the officers he saved was Trish Rhodes, the woman he would marry.

Becoming the high achiever, Ian now excelled in his service in Starfleet. The recognition of his effort and Trish helped him to come out of his shell somewhat and become more confident. With this newfound confidence, he progressed through the ranks quickly. He proposed to Trish as a celebration of his promotion when he became a Lieutenant on the USS Absolution in 2359. His daughter, Lisa was born a year later.

On the USS Absolution he was instrumental in the Aven Insurgency, a rebellion by the miners on Aven III against the mine owners. Following his intense code of justice - and despite the fact that he was the Chief Operations Officer - he negotiated a settlement that brought an end to the hostilities. It led to his recognition for a role in Command and a further promotion to the rank of Lieutenant-Commander. He was commissioned to the USS Dorian after being awarded the prestigious Starfleet Medal of Valour.

His time as Executive Officer on the USS Dorian was fairly standard at first, yet after five years, he had to protect his commanding officer from a mysterious entity that boarded their ship. The entity was destroying the ship from the inside, forcing the starship commander to give self-destructive orders through the use of torturous electric shocks. Hawthorne bravely stepped in, using his own body to absorb the shocks long enough for the captain to break free. Unfortunately, despite his best efforts, his commanding officer died and he himself lost his right hand. Starfleet awarded him Starfleet Medal of Honour and created a new, prosthetic hand for him. After much rehabilitative therapy, he was able to use the hand just like a normal one.

He was promoted to Commander of the USS Terminus soon after the incident. His refusal to move on from the scarring incident on the Dorian caused a deep depression, so dark that it drove Trish away and led to their divorce. Their daughter, Lisa Hawthorne, stayed with Trish, so he accepted the assignment of a three year deep space exploration mission. For him, it was a means of escape and reflection before he returned in time for the Dominion War, where his efforts in the war earned him the rank of captain.

In 2374, Ian’s close friend, David Henry Henshaw, was killed in an attack by the Marquis aboard the USS Pembroke. His wife also perished, leaving their sixteen year old daughter, Cameron Henshaw, orphaned and alone in Starfleet Academy. Ian adopted her and looked out for her. Trish and Ian reached a reconciliation because of the adoption, and while there was no love between them left, they agreed to let Lisa and Cameron grow up together in a semblance of the healthy family Cameron had lost. This prompted Ian to request a transfer to Starbase 84 in 2377 so that he could make himself more available to his adopted daughter and his real one. After David Henshaw died, Ian feared the thought of Lisa losing him without having had a proper father-daughter relationship, and to not be there for Cameron after her loss.

Becoming head of Starbase 84 also allowed him to flourish as a Starfleet officer. As Base Commander, he had almost complete control of all aspects of the running of thescape sector, allowing him to reach the just and logical perfection he favoured. Lisa was an Ensign aboard the USS Theurgy, serving in Operations under the able and renowned Lieutenant-Commander Hendricks. Trish had retired from Starfleet to become an author and Cameron was a junior officer in Counselling aboard the Harbinger. Everything was going so well until Ian received some unsettling news in December of 2380. Two of Starfleet’s ships were accused of conspiring with the Romulans, branded traitors and outlaws. The two ships were the the USS Theurgy and the Harbinger.

Ian received word before most people but everyone in Starfleet knew soon enough. He didn't know what to think. He knew that his daughters would never betray Starfleet. That wasn't how he’d raised them. He knew that there was a good chance that the two commanding officers of the ships might have though. Using all the resources at his command he began investigating, but all he succeeded in finding out from official channels was the nature of their crimes deserved no pardon.

With the things Starfleet had been saying, it was - however - easy to believe that both captains were corrupt. It was said that they were engaged in an illicit affair of classified nature, and defected to the Romulans rather than deal with the fallout. Starfleet Command also said that they’d been falsifying records for months and sending encrypted messages to the Romulan Star Empire. There was even the suggestion that they might have supplied them with coordinates to military research labs in the Alpha Quadrant, giving them access to cutting edge weaponry with the intention of using them against the Federation. All sorts of rumours and reports were flying about, but the one that stuck out the most was that Captain Ives of the Theurgy would have - during a recent diplomatic mission to Romulus - settled the terms of his defection to the Romulans.

The two starships had been hunted for two months, and instead of surrendering when they were engaged, they had raised arms against fellow Starfleet officers. Many ships had been destroyed; images of the dead and reports of the damage were detailed. Some of the damaged ships had even come to Starbase 84, and Ian had seen the destruction and the bodies with his own eyes. Images had leaked to the Federation News Network, and in the eyes of the people of the Federation, the two crews had deprived themselves of the protection of Federation Law. The surviving families of the dead were making loud demands for more resources to be put towards the destruction of the Theurgy and the Harbinger, while those that had fathers, mothers or children commissioned to those ships were being persecuted by the media. Ian had made a singular statement before refusing any further comment, and that had been that he hoped that justice would be served for all involved parties.

Ian slept uneasily every night from then on. He spent two months trying desperately to clear his daughters' names through all unofficial channels he could, all to no avail. When he needed to rest, his dreams were uneasy and his conscience heavy. One night in February, 2381, he was having more trouble sleeping than usual. Terrible nightmares kept waking him. He didn't feel too well physically either – a cold sweat keeping him shivering under the covers. Little did he know that he was not alone.

When he woke the next morning, he no longer had any intention of clearing the names of his daughters.

The new Captain Hawthorne was very different from the old one. While possessed by the interphasic entity that controlled him like a puppet, Ian murdered his ex-wife, seduced his chief security officer, Lieutenant Komial Dotnihl and behaved so out of character that he alerted the officers and crew of the USS Resolve of his corruption, forcing them to ally themselves with Captain Ives and the Theurgy. In the end, the captain of the Resolve was forced to destroy his damaged starship destroying Starbase 84 and all serving there to allow his crew to escape. 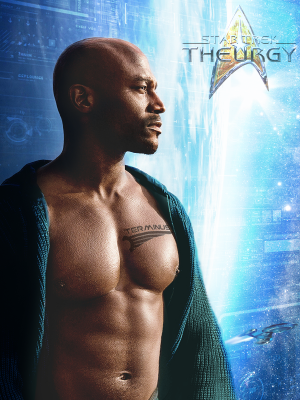 Ian was a man intensely focused on the nature of justice. He always allowed what he views as just to lead him, even when it runs counter to what others might want. This has given him a reputation of aloofness, but in actuality it is just him trying to view things from all angles before rushing to judgment, which is also what draws him to Kal-toh.

Ian is calm leader who doesn't need to shout to command. Sometimes too quiet with those he’s close to, leaving people unsure of his feelings and intentions. He is known for being understanding and kind by people who have ever had to rely on him. He has a hard time letting go of things and spends a lot of time dwelling on the past. His fear of repeating past mistakes sometimes makes him overly cautious for the safety of others even though he doesn't hesitate to show self-sacrificing bravery.

Since the divorce from Trish, he didn't really have any close relationships in his life. Not until a month ago, where he began to entertain a casual dalliance with the Chief Security Officer on Starbase 87 - an affair neither of them have the intention to reveal publicly.

Ian has a few distinguishing features. He has a jagged six inch scar on his left bicep from an animal attack during an away-mission. There is a small tattoo that reads 'Terminus' over his heart. The only hair on his head belongs to his thin, neat eyebrows and a well-trimmed goatee. His right hand is prosthetic, but indistinguishable from his other. He speaks with a faded British accent because of his upbringing in Bristol.