Before her death, Junior Lieutenant Annika Van den Berg was a Tactical Officer aboard the USS Endeavour prior to the destruction of the ship at the hands of the Borg. Van den Berg was placed in an escape pod by an unknown individual as the Endeavour was being destroyed. Van den Berg was rescued by the USS Fairchild-A prior to its destruction in the Azure Nebula. As of March 2381, Van den Berg served on the USS Theurgy, aiding in the opposition against the parasites that compromised Starfleet Command near the end of the 24th century. She died in April of 2381 when a bomb detonated in the Theurgy´s Spearhead Lounge.

Annika Van den Berg was born on August 2, 2354 in Rotterdam, Netherlands, Earth, to her parents Juliana and Hank. From an early age, she was kept away from places where there were likely to be non-humans around; due to her parents being xenophobic. Annika was home schooled; rather than attending school with other children her own age. As soon as she could walk, Annika would always help her mother cook food. Annika enjoyed this time as it was good bonding time between her mother and herself.

When Annika was nine, her father was arrested and imprisoned for murdering a Tellarite whom had come to their house. Annika's father claimed that the Tellarite had looked at him funny and to him that justified the murder. This had terrified Annika as she had shared her fathers quickness to anger, something she had subsequently struggled with throughout her life. Annika made a vow to herself that she would not be as close minded as her parents. After her father went to prison, Annika started going out more in public and joined a speed skating club. Annika quickly became friends with some of the other children in the club, which included a Tellarite and a Betazoid. Annika's mother wasn't happy about this new development, however chose to overlook it as she also had an infant to take care of. Annika was being left to make her own choices from then on, as her mother was concentrating more on her little sister; rather than her.

In her last year of high school, Annika thought back to her personal vow at age nine and how she would never be xenophobic or close minded like her parents. It was about a month prior to high school graduation that Annika had decided to join Starfleet. Upon graduation from High School, she applied to Starfleet Academy without her mother's knowledge. Upon receiving notice that she had been accepted into Starfleet Academy, she excitedly told her mother hoping she would share her joy. However, Annika was disheartened to discover that her mother was angry with her and immediately kicked Annika out of the house and told her to never come back. Annika was heart-broken but this incident had renewed her determination to prove her mother wrong.

In 2372 Annika attended Starfleet Academy specializing in Tactical; while having an interest in medical. While at the Academy, Annika felt out of place initially as she had never been around so many non-humans in her life. Annika even considered quitting the academy due to being uncomfortable with the aliens around her. Annika remembered her vow to herself and had set forth again with renewed determination. In 2376, Annika sent her mother and sister an invitation to her upcoming graduation; which had gone unanswered.

In 2376, newly commissioned Ensign Annika Van den Berg was assigned to the USS Arizona as a junior Tactical Officer. Annika was excited to finally start her career and was glad she was finally leaving Sector 001 for the first time. The Arizona was assigned to a 3 year deep space assignment. In her time aboard, the Arizona didn't have to openly fire on any other hostile species. The most work that she had done was to destroy 1 asteroid. Otherwise, Tactical aboard the Arizona was largely not needed. Annika had found this assignment very boring, however she enjoyed every minute of it as it was something she would never have imagined herself doing just a decade prior.

In 2380, Annika received a promotion to Lt. (JG) and was transferred to the USS Endeavour under the command of Captain Amasov and her Chief Tactical Officer, Lieutenant Cross. Annika acclimatized to the Endeavour and its crew much quicker than aboard the Arizona. She made friends very quickly and even fell in love with Lt. Kai Akoni prior to the ship's destruction at the hands of the Borg. During the Borg attack that occurred in 2381, Lt. (JG) Van den Berg sustained a serious head injury, rendering her unconscious prior to an unknown individual placing her in an escape pod alone so she could hopefully survive the attack. Unbeknownst to Annika, her escape pod was rescued by the USS Fairchild-A, prior to its own destruction during a battle with a Borg tactical cube. Miraculously, Annika survived this attack and destruction as well and was found severely injured, unconscious and amnesic by the crew of the USS Allegiant in the debris contained within the Azure Nebula. The amount of memory loss was not known. 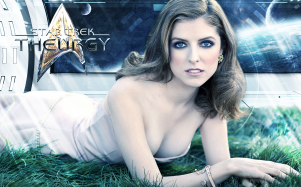 Annika was a very bubbly and happy individual overall. Annika had been still wary of interacting with non-humans, however she had slowly adjusted with that. Her Chief Tactical Officer aboard the USS Endeavour had been a hybrid Vulcan/Bajoran and was also coincidentally her boyfriend's best friend. Subsequently she had become very adept at dealing with non-humans prior to the destruction of the Endeavour. Annika didn't talk about her parents, as she had not talked to her mother in 9 years, or her father in 18 years as of early 2381. Therefore she didn't talk about her past to anyone, other than a counsellor that she would try to see biweekly.

Annika enjoyed going to the holodeck to go speed skating, as she had speed skated in the Netherlands during her younger years. Although the amount of cooking she did diminished the longer she had served in Starfleet, every time she had the opportunity to cook she enjoyed it. Annika also had despised reading books on PADDs and much preferred the look and feel of paper in her hands.

Annika also had a Dutch accent in her voice as she grew up speaking exclusively Dutch for the first decade of her life.

Annika was shorter than average and very slim. She had shoulder blade length brown hair, which was usually kept up in either a bun or a ponytail. Despite her small stature overall, She had been described by numerous people as a 'bombshell' and wouldn't hesitate to use that to her advantage.