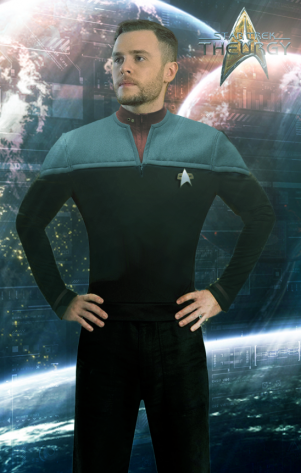 Lieutenant (JG) Gideon Drake was a Tactical Officer on the USS Endeavour. He joined the insurrection of the captives on the Savi ship the Versant and then joined the opposition of the parasites that compromised Starfleet Command in the end of the 24th Century.

Gideon Drake was born in Aberdeen, Scotland, in 2360, although he roamed around the British Isles before he and his family settled on the Federation colony of Tracken II, near Cardassian space. This, his private education and spoiled living resulted in a pampered personality and stuffy demeanor of a countryside manor duke, which Gideon was descended from, even if Drake Hall in the middle of the northern England countryside had long since been abandoned and retrofitted into a Starfleet multicultural learning center. His mother was a former Bajoran pleasure woman who had escaped from slavery in a gul’s harem and was taken in by his father. As such, Gideon shared his mother’s abhorrence of Cardassians.

Gideon's family had ambitions for travel to the stars; indeed, Gideon came from a long line of naval officers and, eventually, astronauts and Starfleet officers. After time at St. Mary's as a child, Gideon's family relocated to the Federation colony on Tracken II. He liked it much better than his native Earth, and stayed since. When the Federation and the Cardassian Empire negotiated an exchange of colonies in 2370, Gideon was among the colonists who joined the Maquis in opposition to the movement.

Brilliant at a young age, Gideon was adept at tactics. One easily compared him to the child Gavroche from Hugo's Les Miserables. He was willing to give up his education to help the Maquis cause, and to make the Cardassians pay for what was done to his mother, even going so far as to tracking down the gul who formerly had his mother enslaved and killed him. In addition, he was skilled in camouflage and lockpicking, his small size and intelligence proving invaluable.

Only when the Cardassians merged with the Dominion was Gideon forced to abandon the Maquis and its cause. He bitterly stood idly by and watched as the Dominion War raged across the Alpha Quadrant, disgruntled towards the Federation at first, because of his opinions from the Maquis, and these disgruntled feelings petered out as the war progressed. He sought revenge against the Cardassian-Dominion merger in the best way a teenager could do: He joined Starfleet Academy. Hoping to fight the Dominion at his graduation, he was disappointed when the war ended, but his skills made up for his disappointment. Indeed, his reputation as a Maquis operative dissipated as he was among many students who amazed instructors, and he took in lessons of the great tacticians of the day, from [Jean-Luc Picard to Benjamin Sisko, even if he benefited first from Michael Eddington.

Upon graduation, Gideon earned the rank of Ensign and his first assignment was on board the starship USS Bismarck, a Proxima-class starship that was a popular assignment for graduates. He served there as an junior Tactical Officer, and Gideon particularly enjoyed working on the old Bismarck out of its powerful arsenal along its port and starboard, which proved beneficial when he helped the crew against an attack by Orion Pirates.

This surprise maneuver prompted Starfleet to transfer him to the starship USS Rabin, an Akira class and a ship with more "teeth" than the Bismarck. The Rabin had seen action in the Dominion War and the crew thought it a relief in its assignment to protect the supply fleet from Orion pirates. Gideon was taken in more by the Rabin, which once again benefited from his surprisingly tactical and stealth skills in not only thwarting some raids from Orion pirates, but in his rescue of some of his crew and the liberation of slaves held by the Orions. This led to Gideon's Grankite Order of Tactics, making him the youngest to receive the award, and his promotion and transfer to the USS Endeavour, where he took in lessons from Captain Amasov. Of course, Gideon was no longer the spoiled child as he was, and his time among the Maquis had humbled him in many ways. As brilliant as he was, he was always modest, and yet took caution when it came to his superiors. Gideon respected tactics, but always humbly deferred to his peers.

Having recently transferred to the Endeavour, Gideon never had a chance to get to know his fellow officers, but he held great respect for them, not just for Captain Amasov, but also to Commander Ranaan Ducote, Lieutenant Commander Blue Tiran, and his boss, Cross, whom he referred to as “boss,” as he did his department superiors, as a term of great respect. He also had respect to Lieutenant Kai Akoni, who he nicknamed “Big Kahuna,” as a reference to his Hawaiian heritage. He managed to get to know Mickayla MacGregor, and he took a liking to her; he remembered meeting B’Lanna Torres in his days in the Maquis, before she disappeared into the Delta Quadrant, and the fact that she was a mongrel Scot like him added incentive to take a liking to the half-Klingon woman.

The Borg attack, and later capture by the Savi, took Gideon by surprise, but he was comforted at first, having shared an escape pod with his fellow mongrel Scot before the Savi captured them. He underwent the Correction process, which meant his Bajoran genes was removed from his body along with his ridges. Gideon didn’t feel bothered by it much; nobody ever even noticed his nose-ridges anyway, but he felt violated in the same manner his Bajoran mother felt when she was a pleasure woman. The holo simulation of the Enterprise had messed with him somewhat, but he still constantly went over in his mind the oath he made to save his fellow crewmates and make the Savi pay as much as possible. He was glad to be unexpectedly wind up in Blue Tiran’s hideout.

Gideon is a suave young man, brilliant in his tactics. He can be arrogant at times, which came from being raised spoiled. But for the most part, he gladly deferred to his superiors, and depending on their conduct, Gideon provided respect. He had grown handsome as he matured, and thus earned a reputation as a lady's man, using his handsome looks as an advantage, but what interested him more than women were tactics and defense. If there was a woman who was a tactician, Gideon considered it a bonus.

Gideon had learned tactics from his childhood love of chess. He later took a liking to games of chance like poker on Tracken II, which heightened his interest; games of chance were thrilling to Gideon, and helped him to figure many possibilities for outcomes. He never gambled if he could help it, though; he liked to think he was an honest tactician.

Cool and calculative, Gideon had learned to calm his emotions; passion had its use but can prove a hindrance depending on the circumstances. He also learned to be silent when he can help it. He was quiet, and tended to be an introvert, desiring to be left alone, a habit since he left the Maquis, but he always welcomed company whenever he wanted, whether they be gifted tacticians or females to impress. However, he had inherited his mother’s abhorrence of Cardassians, and even with the end of the Dominion War and people let bygones be bygones with Cardassians, he’d never forgive them for what was done to Bajor and what they made his mother go through.

Gideon enjoyed keeping in shape, and he always had a unique hairstyle, something that demonstrated his lineage from nobility. He always loved looking the parts of gentlemen, which added to his being a lady's man, but he often had a haunted look, mostly from his time from the Maquis. Gideon always took up target practice and melee practice whenever he did, which made him enjoy being in Tactical.