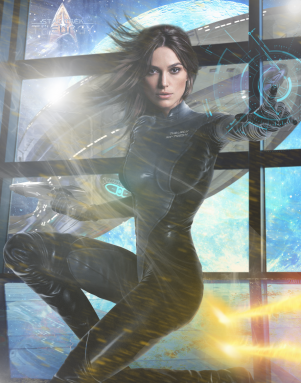 Theurgy NX-79854 was a Ship A.I. Interface Projection on the USS Theurgy. Theurgy NX-79854 aided in the opposition against the parasites that compromised Starfleet Command in the end of the 24th century.

After the USS Voyager returned to the Alpha Quadrant in the year 2378, and the EMH Mk.1 became renowned for its development from a mere emergency hologram to an individual considered sentient (even earning the publishing right to its own holonovel series), another - classified - old project of Starfleet earned a lot of new interest.

Twenty six years earlier, huge amounts of funding had begun in the development of a rudimentary idea involving a Ship AI, and as a side-project to this was the outline of a holographic interface for this A.I. The term 'artificial intelligence' (or computer intelligence) had always described prototype computer hardware and software sophisticated enough to reason independently, to form new conclusions and alter its own responses. By that time, the technology was no longer impossible. The idea was that while the A.I. would be limited in its accessibility to ship systems, it would still serve as well as any crew member - possessing first-hand knowledge about the vessel it was installed into.

As time passed, the project caught the eye of non-scientists, became a political debate, and while it was the Daystrom Institute's hope that the Ship A.I. would inspire an entirely new generation of artificial intelligences capable of far more than anyone could have previously imagined, many began to concern themselves with the independent nature of living artificial intelligences installed and adapting themselves aboard torpedo-carrying starships. While the developers thought the benefits of making a starship an essential part of its crew far outweighed the possible negative scenarios, Starfleet as a whole could not reach consensus. The solution was a set-back for the A.I. development for sake of preserving the comfortable safety of the common standard computer integrity.

Besides the software programming, an extensive amount of hard-wiring had to be done to a Starship in order to keep the software from being able to access certain key systems. Long and heated debates coursed over the matter of what an AI was supposed to be able to affect or not, and what manner of prerequisites were needed to alter the interface projection's accessibility and actions. Moreover, the projection itself needed "physical" accessibility to the whole ship, and therefore required a huge amount of holo-emitters on all decks.

Subroutines would often account for the sentient qualities of an A.I. and this debated Ship A.I. project was no exception. Subroutine C-47 was a section of the software in each Starship's computer responsible for non-critical systems such as replicator selections and recreational programming, and all of that had to function without hampering the sentience of the interactive projection. An activation subroutine also needed to be ironed out; a standard set of procedures that were required to be followed prior to the summoning of the projection. Furthermore, a modesty subroutine was added in response to the evident fact that the hologram would not feel it was necessary to wear clothing because it would neither suffer for the elements nor leave its own "body/ship" so to speak. Suffice to say, the magnitude of the project escalated every day. The subroutines piled up, and added with the millions of other functions of the Starship itself, it seemed it would become too much data to handle.

Though with the advancement in Android sciences at the Daystrom Institute, based on an advanced neural-net design of Noonien Soong and the technology of a pasitronic brain, the vague idea of a solution took form. This however, was the point when the Dominion War broke out, and the enterprise was no more a priority.

Yet with the aforementioned return of the USS Voyager, the project received its due attention once again, and the concept of incorporating a pasitronic brain into the main computer core of a starship was given its proper chance of implementation. This, with the evolving Theurgy project that was about to be finalized. Moreover, the Emergency Command Hologram (ECH), was an extension of the USS Voyager’s EHM and proved essential in the development process. The program was implemented by Captain Kathryn Janeway on Voyager and would serve as a 'backup captain' in the event of the current command crew being incapacitated. The ECH possessed information from all major Starfleet strategic and tactical databases and could incorporate them into its plans for controlling the ship. Equally so, would the Ship A.I. Interface Projection possess such a command subroutine.

All the pieces of the puzzle had been uncovered, and with the blessing of Starfleet Command, results came fast. The USS Theurgy was one of the first ships to be commissioned, and it was picked for the Ship A.I. implementation.

The Daystrom Institute installed the A.I:s primary matrix in the pasitronic brain within the computer core of the USS Thuergy itself. Without propulsion or tactical systems yet installed, the embryo that was the A.I's program could branch out and connect to every corner of the Theurgy’s mainframe. In the beginning, there were of course huge amounts of cascade failure - occurring when a "learning" program was corrupted either by repeated application to a task it was ill suited to perform or by external influence such as inferior hardware used to implement it. In a neural net system, in particular a positronic brain, in which most or all sub-programs interacted, this led to corruption of surrounding algorithms and routines as they attempted to use data generated by the faulty application to perform a task of their own.

Yet, in the end, the Daystrom Institute and hundreds of civilian programmers on the Federation's payroll managed it all with version 7.5. Their continued efforts with the stabilized version gained great results, increasing overall efficiency, but also helping the A.I. to become more of a... person. The result was Thea, as she began to call herself instead of Theurgy NX-79854, a woman who had the benefit of the complete attention of the fleet's finest Counselors in order for her to come to terms with her existence. Throughout the year 2378 and 2379, she evolved from a simple yet highly dynamic ship's artificial intelligence into what came to be seen as the Theurgy’s personality and guardian spirit.

In terms of functionality, she was flawless - tested and re-tested in all kinds of battle and non-battle situations. The Federation would never launch a prototype Starship with an AI installed unless it had been thoroughly tested, after all.

Recently, Holographic Specialist Lin Kae developed a mobile emitter for Thea, with superior sensory mapping, giving her the ability to leave "herself" and go on away-missions.

Thea was a dutiful hologram with the - considered - ordinary curiosity of a sentient computer program. However expected, with her functionality of such a multi-faceted nature, she was not the least semi-present in her manner or speech. Indeed, she was the computer-voice whom the whole crew interacted with daily, yet the hologram projection of her could only be in one place at a time - just like the EHM holograms of older Starships. For sake of being a flawless interface projection for the crew, she was assisted with settings that would help her to socially experience and express emotions and at the same speed non-artificial lifeforms do.

Her freedom to roam the ship, while granted all days and nights, was limited due to Starfleet safety regulations, and there were many areas and operations that she was hard-wired to not be able to interact with or affect by her own choice. More than a third of her programming consisted of scenario descriptions and varying degrees of authority levels, degrees of security clearances addressing the ability to relay what members of the crew might have said or done at some point on board, not to mention the overlapping layers of filters set in place for her in other critical ways.

Yet beyond all the safety measures that walked a fine line of being a deterrent for her programming and an irreplaceable asset for the crew, she was exploring her life as she knew it - able to activate and deactivate herself whenever she pleased (again, depending on Ship functionality). She had an emotion chip in the main computer core, and it was tweaked to click into inactivity during battle situations in order to keep her rational and collected.

Another interesting aspect was the multiple functions she could serve on board; able to assist any department as needed. A walking and talking Fleet encyclopaedia, with instant access to the (now stored offline) Federation databases, she served best in theoretical challenges, while still learning through experience the practical tasks that she would need to perform for each individual department.

She was made to appeal to the eye in her programming, and in order to distinguish her from the rest of the crew with a quick glance, she was given a computer-rendered body suit that changed color depending on what department she was serving when she was activated. When she was off duty, she wore casual clothing much like any other crew member. She even had her own quarters, by her own request, and liked to dress herself with physical clothing on top of her projected photons and physical mass of finely toned forcefields. 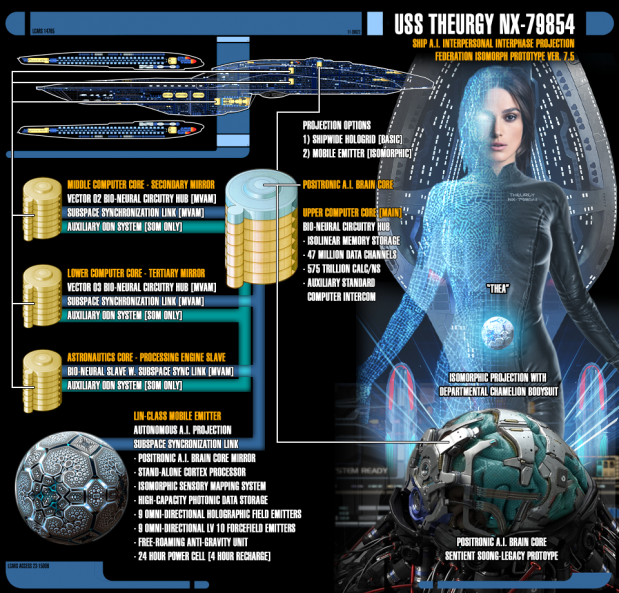