Designated as a Manta-class Advanced Scout, like many of the other things stationed on the USS Theurgy, this scoutship was an experimental prototype. When it was decided that the Theurgy would serve as an experimental testbed for both a fighter squadron of the new Mk III Valkyries and for a new system of computer interface (the Ship A.I.) it was decided that for a auxiliary craft, they would integrate a prototype for the newest in the aerowing-series of scouting vessels into the hull of the saucer.

It was an augmented version of the Talon-class scout, refereed to as Project Manta by the Advanced Starship Design Bureau. Just like it's registry, the prototype was also given an official name besides 'the Yacht', and that was the USS Allegiant (commonly ref. as "the Yacht").

The Allegiant was the culmination in a long line of mission-specialized auxiliary craft starting with earlier development of the Peregrine-class Federation Attack Fighter. The successful deployment of this ship for patrols near the Cardassian DMZ led to the development of a hybrid Runabout-fighter geared towards atmospheric flight and combat but also equipped with specialized sensor packages allowing for detailed planetary scans. This project led to the aerowing-design, though it never gained much widespread use. The Intrepid and the first of the Luna-class starships, however, had aerowing shuttles as auxillary crafts mounted underneath their saucers.

The aerowing's advanced sensor package and atmospheric capabilities were further fine-tuned into the development of the Talon-class scout ship, which had gained much more widespread use within the Federation as a deep-space reconnaissance craft and as a medium sized military transport. Given the Talon's advanced sensors and its capabilities to be further amplified, small sleets of these crafts could be deployed along the Federation's various neutral zones to aide in the detection of cloaked ships. 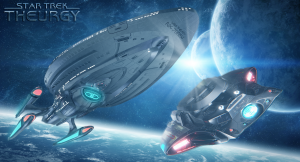 USS Allegiant (commonly ref. as "the Yacht")
Another notable accomplishment of the Talon-class was how its size and flight-profile was used in the development for the first wave of experimental fighters in the Valkyrie-project. With the commissioning of a Mk III iteration of the Valkyrie warp fighter, the Talon-class scout ship was becoming outclassed and it was becoming apparent that in an arms-race where a single fighter could potentially destroy the scout, improvements were required to be made in order to keep the shuttle-series a viable tactical choice.

It was with this in mind that development began on the first prototype of a new Exploration Scout. The shuttle would be viable for much longer mission lengths and would house a larger crew while still retaining some of the aerowing design that had made the series excel in atmospheric situations. It was decided that in lieu of a standard Talon-class scout being embedded into the USS Theurgy’s hull as an auxiliary craft, the Theurgy would have its hull modified to have the new Manta-class scoutship instead.

A relatively new development in phaser technology, the Type U pulse phaser was the most combat-focused development of the phaser to date. It combined large, nearly flawless emitter crystals with rapid-discharge EPS banks and high-speed beam focusing coils. The system allowed the charge to be stored in the coils for a few nanoseconds, then released it as a layered pulse. Due to its nature, shields and armour had a harder time dispersing the pulse, resulting in more damage to the target. Type U pulse phasers were first deployed on the USS Defiant, and while the Manta-class scoutship was much smaller in size, technological advancement since the construction of the Defiant allowed the system to be downscaled sufficiently to fit. Like in the Defiant, the warp drive plasma conduit ran through the primary phaser coupling to double the power of the scoutship’s cannons.

These were the largest emitters used on small craft such as runabouts and light escorts. The four Type VII phaser arrays, two in front and two in the aft, were the Manta-class scoutship's secondary firing option after the Type U pulse phasers.

Part of the advanced Manta Project, this probe used tetryon pulse technology. The primary use of this probe was to fire into an area where it was suspected that cloaked ships may wish to enter into Federation space.

Once launched the probe began to emit tetryon pulses which reflect off most cloaking systems (various types of phase cloaks are exceptions to this method of detection). The Allegiant was outfitted with a special sensor array designed to be able to detect even the most minute of these tetryon pulse reflections and therefore was well suited to carry a tetryon pulse probe into an area. Once launched, the craft could then monitor the area for potential cloaked vessels.

For sake of reference to the locations described, please check the deck plan below: