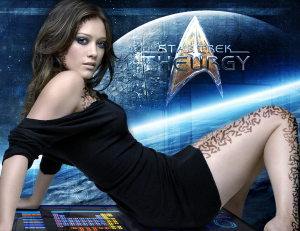 Trill characters in Star Trek: Theurgy:
The Trill (or Trills) were a humanoid species native to the planet Trill. They appeared almost identical to Humans, but for rows of spots running down the sides of their bodies, from head to toe. However, this superficial similarity concealed a considerable difference — the Trill were capable of bonding with a symbiotic organism known as a symbiont, creating a distinct being from the two individual creatures. The symbionts could live for many centuries, and were placed with successive hosts, carrying the memories and knowledge of previous hosts into a new joining with each new generation. This fact wasn’t widely known outside the Trill themselves, but it wasn’t a secret — it simply wasn’t widely discussed, and the number of joined Trill was relatively small. The Trill had been part of the Federation for well over a century as of 2381, with several renowned Trill serving important roles in shaping the Federation. The Trill, as a culture, tended to be focused on intellectual pursuits first and foremost, as learning and wisdom were prized by the symbionts in their hosts.
Retrieved from "https://uss-theurgy.com/w/index.php?title=Trill&oldid=11478"
Categories:
Star Trek: Theurgy Wiki
↑ ↓