Before dying in the Battle of the Houses, Morgan Li Jie Song was an Engineering Specialist aboard the USS Theurgy. Early in his Starfleet career he had been captured by the Klingons and spent several years as a prisoner of war. After his release, he was eventually assigned to the USS Theurgy, where he assisted in the opposition against the parasites that had compromised Starfleet Command.

Morgan was born in 2350 in Tycho City, Luna, to Imogen Song and Huang Li. The youngest of three siblings, Morgan was primarily raised by his sisters due to his parents’ busy work schedules: his father worked long shifts as an engineer on a deuterium harvesting rig, and his mother was a lieutenant in the United Federation of Planets Starfleet.

Despite his parents’ absence, Morgan was very close to his family. He discovered his aptitude for electronics and mechanical systems by joining his father at work, and he always had a mellow and tight-knit relationship with his sisters, Theresa and Kitty. The family would often make trips down to Xiamen, Earth, to visit Li's extended family, and some of Morgan’s fondest memories were of the time he spent there.

The only exception to this closeness was Imogen, who returned to Luna very rarely, and as a result, Morgan saw very little of her during his life. Nevertheless, Morgan was proud of his mother’s work and eager to follow in her footsteps. At 17, he enlisted in Starfleet as a non-commissioned officer and enrolled in several years of training.

When Morgan completed his training, he was assigned to the USS Profundity, one of the earliest Sovereign-class starships. The ship’s voyages mostly consisted of diplomatic missions, satisfying Morgan’s desire to travel and explore. However, the peace was shattered when the Klingon chancellor Gowron moved to take the Archanis Sector by force.

Returning home from a diplomatic mission to the Shamin, the USS Profundity was rerouted to Ajilon VII to respond to a Starfleet distress signal. But the signal was a trap, and the ship was soon surrounded by multiple Vor’cha-class attack cruisers. The Profundity sustained heavy damage during the ensuing battle, and Klingon boarders captured a number of the crew, including Morgan. The Profundity attempted a retreat, but its fate was unknown. Much of its crew was considered missing in action.

Morgan and the other captured crew members were incarcerated on Rura Penthe as prisoners of war, and although the conflict between the Federation and the Klingon Empire officially came to an end a few months later, bureaucracy and corruption extended Morgan’s sentence for nearly three years.

During this time, Morgan survived with the help and protection of Nuran Ora, a fellow prisoner and El-Aurian. In exchange for this protection, Nuran had Morgan use his mechanical skills to build a transponder with scraps stolen, bartered, or salvaged from around the prison, hoping to contact her people and arrange her release. Over time, Morgan fell in love with Nuran, and although it was never quite reciprocated they did find some comfort in each other.

In mid-2374, as Morgan neared his third year of imprisonment, he fell gravely ill. The harsh conditions had finally taken their toll, and as his health declined it became clear he was unlikely to survive much longer. Barely conscious and rarely lucid, the next thing Morgan was aware of was awaking on a Starfleet vessel headed to Earth. Nuran had used the newly-completed transponder to contact the Federation, and saved Morgan’s life at the cost of her own freedom.

Re-integrating into society was difficult for Morgan. He initially spent his recovery in Tycho City on Luna with his family, but chose to relocate to San Fransisco, Earth, after only a few weeks. Here he was physically rehabilitated after his illness and years of malnutrition in a harsh climate, as well as going through extensive therapy. After over a year, Morgan was once again cleared for active duty and assigned to the USS Hypatia.

Morgan served on the Hypatia for four years. The assignment was uneventful, largely consisting of supply runs and patrols, but Morgan distinguished himself for his work ethic and resilience and eventually rose to the rank of second-class petty officer. He was dedicated but reserved, and did not form any lasting attachments with his crew. So when he was offered the opportunity to transfer to the newly-commissioned USS Theurgy on his commanding officer’s recommendation, he gladly accepted.

The first two years of Morgan’s time on the Theurgy passed much the same as his time on the Hypatia, but it was not to last. When the ship intercepted a series of transmissions exposing the horrifying revelation that members of Starfleet Command had been replaced by impersonators, the Theurgy was forced to flee Earth pursued by Starfleet. Although they managed to escape, when they stopped to resupply on Niga they inadvertently infected members of the crew with a parasitic virus, and Morgan was injured in the ensuing chaos. He was put into stasis to preserve his life, and woken several months later following surgery. 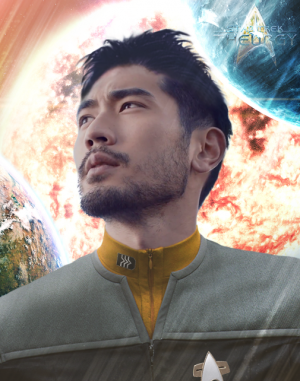 Morgan was a quiet and gentle soul, a naturally genuine and empathetic person. This had been somewhat tempered by his experiences, but not fully lost. Always a hard worker, he now threw himself into that work and became withdrawn and distant. Although he was perfectly amiable to those around, if a little subdued, he actively avoided forming lasting relationships and preferred to keep to himself. This was difficult to do, as he is always finding himself desiring a connection with others. He doesn't want to re-live what happened with Nuran and tells himself that it's better just to avoid forming meaningful relationships in the first place. His inner struggle causes him to appear as overly serious or thoughtful, and he easily gets lost in his own head for hours on end.

After his release, Morgan developed a morbid acceptance that terrible thing had happened, and would likely continue happening. This was a large part of the reason he distanced himself from those around him, and it also led him to be somewhat calculating and selfish in times of danger. He struggled with survivor’s guilt, and what he perceived as his own cowardice.

Despite all this, and everything that had happened, Morgan retained some of his original softness. He was determined to see the good in the world, no matter how small, and that included the good in people. He could be overly-trusting as a result, perhaps even to the point of foolishness, but ‘seeing the good’ had been an assignment he was set during therapy, and he took it seriously even years later. Many of his habits and pass-times came out of this assignment: he practiced Tai Chi after waking, he tried a new dish every week, he wrote to his sisters when he could. His approach to these things was almost ritualized; they had become so important to his life and outlook.

Being from Luna with its low-g and artificial gravity environments, Morgan was very tall at 6’4”. He was lean and wiry, passably fit and healthy as he kept up a weekly exercise regimen. He kept both his hair and beard short, and carried himself with a relaxed and balanced posture.

After the prolonged cold of Rura Penthe, Morgan suffered from a thermoregulatory disorder that left him with an irregular body heat and hyposensitivity to warmth. During the Niga Incident, Morgan was struck by a phaser beam to his chest, causing neurological damage and internal burns to his lungs and heart. The life-saving surgery he underwent after being placed in stasis gave him a biosynthetic heart and an implanted rebreather to replace his trachea.