Nator 159 was an Operations Officer aboard the USS Theurgy. S/he sustained heavy injuries during an engagement with Task Force Archeron as the Theurgy escaped Federation space. S/he was put in stasis to preserve hir life, and in March of 2381, s/he was given the medical treatment needed to be able to return to duty. Nator 159 aided in the opposition against the parasites that compromised Starfleet Command in the end of the 24th century.

Unfortunately, s/he was fataly injured in April of 2381, and put into stasis.

Nator 159 had a fairly typical upbringing - matured, educated, and fully grown by the age of 3, and charging around with hir small gang of four friends when they weren't being pinned down by their tutors long enough to take a lesson. Running and hunting through the rolling forests of hir home was a singular joy, until one of the pack, Hemar 32, plunged down a hidden gorge and broke both hir legs - one of which was a compound fracture. It took half an hour of climbing just to reach hir, and then there was the problem of getting hir back out and to aid. It took Nator, Lora, Jori and Ekoren another hour to get Hemar out of the gulley and on to flat land, and then they had to carry hir across fifteen kilometres of wooded ground to the nearest municipal transport station to take hir to a hospital.

They had carried hir in shifts, but the blood loss outpaced even the regenerative metabolism of the young Hermat, and the medics at the hospital had been unable to save hir. Because of their relay, the only-recently-adult gang were covered in their friend's blood, and dirt, and all manner of other evidence of their trek through the forests. A Starfleet nurse on an exchange with the Directorate's medical arm took them aside to get cleaned up, and to tell their story while the hospital got in touch with Hemar 31. The others held a certain disdain for the offworlder, and left as soon as their account was made, but Nator 159 was curious despite hirself.

S/he quizzed the Fleet nurse about what it was like to live on Hermat as an outsider, what it was like to live with only one set of genitalia... later came wider questions about the Federation and the galaxy as a whole. The nurse encouraged hir to go out and see it for hirself; as a legal adult of hir home planet s/he was entitled to apply for admission to the Academy for training and commission. S/he left the nurse in the hospital, and went home to grieve. It was some months later that s/he was able to consider what to do with hir life, despite increasingly impatient nagging from hir parent, Nator 158.

A year later, Nator 159 made just such an application to be considered for the Academy, to the confusion of hir friends, and was accepted when s/he was 5. Before s/he left, there was a drunken night in the capital during which they got a matching tattoo - five simple dots arranged in a pentagon; one for each of them and one to commemorate Hemar 32, surrounded by an unbroken ring.

At the Academy, s/he made a brief foray into the Medical branch in order to "repay" the efforts of the Starfleet nurse who had tried to save Hemar, before s/he and hir tutors realised s/he had precisely zero aptitude for biology - xeno or otherwise. Physical equipment, though, and higher mathematics, s/he could eat alive. She switched to Operations, and scored in the ninetieth percentile for the rest of hir time at the Academy.

Hir cadet cruise passed without incident, but was still an educational journey through social interactions away from the relative safety of Directorate-led meetings. Hir transfer to the Saratoga, however, was short-lived. The Borg attack on Sector-001 came a few months after s/he joined that crew, and hirs was one of the 40 ships destroyed by the single Cube. Miraculously, s/he managed to get to an escape pod without injury, and was picked up by the rescue fleet.

Given Nator's aptitude for systems integration and design, s/he was seconded to the fleet yards at Mars, and promoted due to the new 11,000-strong hole in Starfleet's roster. According to Personnel, s/he now had "experience fighting the Borg", and hir knowledge would prove invaluable to the naval architects when building the next generation of ships for the Fleet. Cleared as psychologically fit to return to duty, s/he was given the equivalent of a pat on the back and told to get to work.

Career progression was fairly slow compared to the shipborne fleet, but s/he found that s/he didn't mind despite the fact that s/he had fewer years to waste than all of hir colleagues. The work was interesting, and rewarding in its own right - this despite clashing with several of the other members of the work teams, including a certain petty officer by the name of Herrold who pathologically refused to take responsibility for his own mistakes; even going so far as to try and pin some of them on Nator. After, in hir eyes, a particularly unfair passing of the buck up the chain and into hir lap, s/he went looking for PO3 Herrold. The ensuing dressing-down was not subtle, and was overheard by Nator's own division chief. As a way to encourage them to find a swift resolution to their problem, he ordered them to work closer with each other in order to finalise the auxiliary-craft support systems for the Luna before the project suffered any further delay.

Hir problems with Liam Herrold were not over. Though they found a compromise acceptable to both of them, their working relationship remained strained, despite their closer interaction allowing them get to know one another better in a personal capacity. For Nator, this was a mere matter of course. Liam was just another non-Hermat; for all hir relative liberalism and adventurousness in leaving hir home at all, s/he was still possessed of an ingrained cultural xenophobia whether s/he wanted to be or not. S/he was utterly surprised and caught flat-footed when the NCO confessed an attraction to hir. At first s/he suspected a prank, and simply brushed it off as s/he quoted regulation. When s/he finally realised he was serious, s/he let loose. This time, half the division would overhear hir assessment of his character, his presumptions, and the pity s/he held for his immediate ancestry. Nator only ran out of steam when s/he realised that the division chief and the station commander were both standing behind hir. S/he was reduced to Junior Grade for the ferocity of hir outburst and hir lack of apparent interest in curtailing it. S/he lost track of Liam shortly after that event.

Despite all that, watching the keel be laid for the USS Resolve, after years of work to lay out the systems required by the design brief, was easily equal to any birthday s/he could have imagined. Around 2375, a huge influx of resources and personnel were poured into Starfleet's shipyards the Federation over, and Nator jumped at the chance to become part of the team working on the next super-capital deterrent; partly for the prestige of the project, and partly to start afresh after the personal disasters of the prior one. S/he helped design the ancillary systems of the prototype, but was not among those chosen for its shakedown cruise. However, s/he left a transfer request lodged with Personnel, and was able to board as crew when the Theurgy returned from spaceworthiness trials.

Unfortunately, s/he was critically injured during the ship's flight from Earth after its discovery of Starfleet's infiltration - duranium shrapnel penetrated hir skull when an EPS junction overloaded scant metres from where s/he was working below decks. S/he was taken to sickbay and placed into stasis to await a time when the medical staff could spare the resources for as involved a surgery as Nator would require. 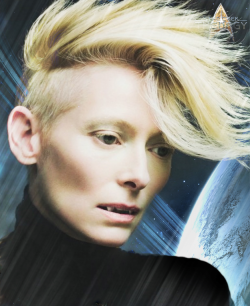 Nator was a fairly cool-blooded person in most situations; it took quite a bit to provoke hir to rash action. However, when pressed, s/he could become quite ruthless before s/he could regain hir calm again. Otherwise, s/he was honest and straightforward to a fault, exhibiting a fairly dry (and dirty) sense of humour when s/he could be distracted from whatever s/he was working on at a particular moment. Relatively well-adjusted to off-planet life as s/he was, Nator still found it difficult to truly empathise with hir crewmates, but persisted in making the effort.

After hir injury, however, s/he withdrew into hirself somewhat. S/he retained hir procedural memory perfectly; s/he was able to use tools and equipment without issue. Faces and names were more difficult for hir to recall instantly, though, and this strained hir working relationships on top of hir lingering guilt due to missing entire months of the Theurgy's ongoing escape from the rest of Starfleet. Shared experience was also essential to hir work on relating to the rest of the crew, and the gap left by hir suspended animation formed a gulf s/he worried s/he wouldn't be able to span. An old nervous tic of tapping hir claws against whatever hard surface was to hand resurfaced after s/he was released from Sickbay.

S/he spent a lot of hir spare time on the holodecks, running through forests or climbing cliffs, the solitude and the exertion helping hir find a handle on hirself again while s/he dealt with the shock of their circumstances. If s/he required a less strenuous way to unwind, s/he could usually be found in one of the crew lounges or the ship's arboretum sampling the various kinds of synthehol on offer. One of hir favourite imports on hir homeworld had been wines from the vineyards on Risa - while s/he wasn't sure if s/he'd ever get to try the real thing again, the Theurgy's replicators could make a more than passable imitation.

Nator was a trim, androgynous humanoid, hir fair hair usually cut short so as not to interfere with the more physical parts of hir job. There was little spare fat on hir frame at all; s/he wasn't one to overindulge in the first place, but a steady regime of cardiovascular exercise and the more high-impact workouts afforded by bouldering in the holodeck meant that s/he had a physical strength that hir appearance might belie.

Hir gaze was steady, preferring to look people dead in the eye during conversation whether speaking or listening, which could sometimes come across as confrontational. In hir head, though, it was a minimum courtesy - even if s/he had trouble detecting when the context might favour a softer approach. S/he moved with a fluid ease, and was fairly light-footed, often managing to surprise any members of hir detail when s/he spoke before they noticed hir.

Off-duty s/he tended to wear tank tops and loose pants - easier to move around in - which exposed the tattoo on the inside of hir left forearm, near the elbow: five black dots, one ringed, in a pentagon.