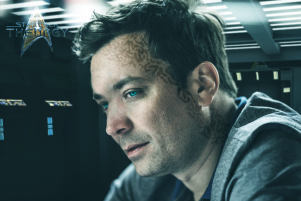 Before dying in the Battle of the Houses, Lieutenant Kaylon Jeen served as an Asst. Chief Engineer on the USS Theurgy.

Upon being joined with the Jeen symbiont on May 4th, 2368, Kaylon entered Starfleet Academy training to be an engineer where he graduated with honors. He served on the USS Sarek during the Battle for DS9 where he earned the Star Cross for rescuing two fellow crewmembers following a plasma explosion in the engine room when the Sarek was hit by Cardassian torpedoes. He transferred to the USS Armstrong following the Dominion War and after that to the Utopia Planitia Fleet Yards where he worked on construction of another ship, the USS Powhatan, the prototype for the next class of Science vessel after the Iroquois class ship.

Following the commissioning of the USS Powhatan, he transferred to the USS Cayuga where he worked to distinguish himself among his peers drawing on both his own experience, and those of the Jeen symbiont. Upon the assimilation of the Chief Engineer after a Borg attack on the Cayuga, Kaylon was granted a field promotion to Lieutenant and made Chief Engineer of the Cayuga. As of March 2381, he joined the crew of the USS Theurgy in it's battles against a corrupted Starfleet Command in the late 24th century.

As of 2381, the Jeen symbiont was 205 years old, and had had 3 hosts prior to Kaylon, who was the symbiont's fourth host. The first two hosts were female, the third was male. Jeen spent the first five years of its life being tended by Trill caretakers in the symbiont pools until a suitable host was found.

Kaylon Werado was born on Trill in June of 2348 to Daylor Werado, a joined Trill, and his wife Jadda who was unjoined. His father’s symbiont was an accomplished diplomat who had been part of the team to negotiate Trill’s entry into the Federation. This was a story he often shared with young Kaylon. As a result, Kaylon always felt a sense of pride to be a Federation citizen and a sense of loyalty to the Federation since it stood for concepts of Truth, Justice, and Peace. His desire to serve the Federation like his father, who was a successful ambassador in his own right (he served as Trill ambassador to both Tellar and Betazed.)

Kaylon spent many hours reading everything he could get his hands on, from replicated ancient style comic books to novels, newsfeeds, and of course, technical manuals.

In 2368, two months prior to entering Starfleet Academy, Kaylon was joined with the Jeen symbiont, becoming Kaylon Jeen.

While at the Academy, he immersed himself in engineering. He served as the Cadet Engineering Lead for the elite Nova Squadron for two of his four years there until he decided to move on to "give someone else a chance at the background glory". Occasionally, using "testing the engines" as an excuse, he would take the squadron's shuttles up for "test runs" where he would do things that even some of the cadets would not dream of. This was tolerated because one of Jeen's previous hosts was a test pilot. That host was good friends with Torias Dax. The previous host, Dayak Jeen, in fact was able to successfully pilot the shuttle that killed Torias, after the ship had been redesigned following the fatal crash that robbed him of his friend. Kaylon has often used Jeen's skills and memories to pilot small craft when needed but decided upon joining that he would not focus on flight as part of his career, so as to give the symbiont more varied experiences even though the desire to fly has been very strong since the joining.

He served in the Dominion War aboard the USS Sarek, taking part in several battles, including the battle for Deep Space 9 during Operation Return. During this battle, a Cardassian Galor class vessel hit the Sarek with two direct torpedo blasts, causing major damage to the engine room. A pair of enlisted crewmen were working to restore the Sarek’s starboard shields when a plasma conduit exploded, trapping them from the exit. Without regard for his own safety, Kaylon quickly make his way to the frightened shipmates and calmly helped them get out of the engine room. His quick actions not only saved their lives but calmed them enough to be able to reroute power and restore the Sarek’s shields until damage control could get the plasma fire under control. The captain recommended Kaylon for a commendation and he was awarded the Star Cross.

His time at the Utopia Planitia Fleet Yards gave him an even greater appreciation for the power of Starfleet vessels and the design and care that went into each one. While there he worked to increase the efficiency of the new Powhatan class’s deuterium enrichment hardware, so that a starship on a deep space mission could make more efficient use of any raw deuterium that was collected and processed on board. It had the added advantage of increasing overall deuterium usage as well. For this he was awarded Starfleet’sMeritorious Service Medal.

Upon being posted aboard the Cayuga, he received permission from the captain and chief engineer to retrofit the ship’s deuterium system to match the updated design that was implemented on the Powhatan class. The fact that the head of the shipyards had recommended it to all commanders of Iroquois class ships didn't hurt, since the Powhatan class was the next class ship after the Iroquois. The Cayuga had just never had the opportunity to go to spacedock for the refit. From that point on he took every opportunity to try new things to improve the ship's systems operating efficiency, spending most of his holodeck time tinkering in an engine room diagnostics workshop with the holo characters physically resembling Earth’s Marx brothers.

When the Borg attacked the Cayuga, the Chief Engineer was assimilated and after the battle, Kaylon was granted a field commission to full lieutenant and made the ship's chief engineer. As of March 2381, he joined the crew of the USS Theurgy in it's battles against a corrupted Starfleet Command in the late 24th century. He later died in the Battle of the Houses. 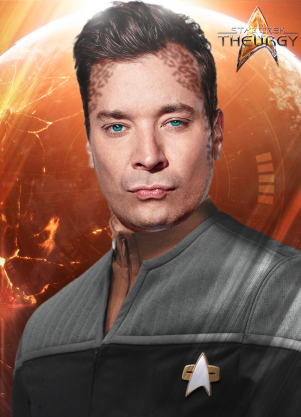 Kaylon had always been very circumspect about being a joined Trill. He considered it a great honor and took the responsibility as seriously as any joined Trill, but at the same time, focused on his own experiences and life goals while gladly (and liberally) taking advantage of Jeen's experiences.

Kaylon grew up with many advantages due to his father's status, but was always grounded and practical. However, he had a sense of humor that his younger brother considered unmatched. He was always playing practical jokes, and had a jocularity that put others at ease unless they were the target of one of his pranks. Still, his victims often found themselves laughing at the jokes that were played on them. His favorite sound was a loud groan from people when he used a terrible pun. Upon being joined, he said to his mentor "Now I've got 200 years worth of material for my arsenal of jokes" and immediately decided that should he ever wind up behind the controls of a fighter, that his callsign would be "bluejeans", drawing on the name of the host for inspiration. In recent years, his pranks have tapered off as he recognized that in most cases, they would be wholly inappropriate.

His easy way was never used as a reason to call his dedication to duty into question. He had always been meticulous about his work and shown fierce loyalty to the men and women he served with. He knew when to work and when to play, and he did both at full impulse. He even had "Work Hard and Play Hard at Warp 10 in Trill script tattooed vertically along his right shoulder at the edge of his spots. Jeen's second host had a dry wit, sometimes to the point of being acerbic. She was often fond of saying "I'm only nice to people I don't like" and to some extent this has carried over to Kaylon even though over the years since he was joined, he managed to find a way of delivering his "insults" in a good natured way, and when he did target someone for a practical joke, he would - however - scrupulously avoid playing them on Vulcans.

A good natured quip was never far from his lips.

Kaylon's deep blue eyes always sparkled with good natured amusement, even when situations were tense, but his jaw would flex when he was deep in concentration.

His right shoulder was tattooed vertically with Trill script that read "Work Hard and Play Hard at Warp 10" along the inside edge of his spots. The whole tattoo was approximately 4 inches long and warp core blue in color.

He always kept his dark brown hair short and manageable. His physique was about average, never having really cared for physical exertion any more than is necessary to maintain good health and to pass his Starfleet physicals with no issue. He regularly claimed that the extra 2-5 kilos he weighed was "all symbiont, and not me".

When he did target someone for a practical joke, he would - however - scrupulously avoid playing them on Vulcans since they tended not to appreciate the humor.